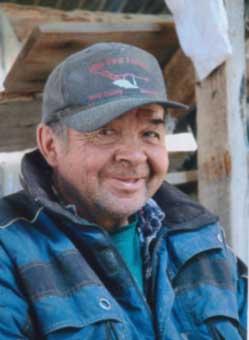 David Anthony Leonard Wassengeso “Chicken George” passed away peacefully to the spirit world on May 4, 2017. He was born on December 27, 1940 to David and Lucy George (nee Shawana), both predeceased. Survived by his loving wife of 55 years, Janette, and his children Daniel “Sonny” (Trissy), Bernadette “Smallcook” (Maheengun) and Edward “Eddie”. Cherished grandfather of six grandchildren, two great-grandchildren and third godchildren. Will be greatly missed by his sister Angeline and brother Clifford (Phyllis) and his brothers and sisters-in law. Predeceased by his siblings, Henry, Freda and Anthony. He will forever be remembered by his many nieces and nephews and his special friend, “Laddie”. Leonard worked as a carpenter and a farmer, but his true passions were horse pulling, plowing, bluegrass, fiddle music and lastly, hockey as he was always “waiting for the call”. Leonard was admired and loved by many, but always kept his humbleness. He was a quiet, but gentle man who always had a smile and kind word for all those he met. Leonard has been described from many as a legend, and a legend he will always be. Visitation started on Saturday, May 6, 2017 at 6 pm at St. Ignatius Church. Funeral Mass was at 11 am on Monday, May 8, 2017 at Holy Cross Church. Interment will be at Upper Wikwemikong Cemetery. Arrangements entrusted with Island Funeral Home, Little Current.