NEW ZEALAND—Dawn Madahbee Leach, chairperson of the National Indigenous Economic Development Board and manager of Waubetek Business Development Corporation was part of a female Indigenous delegation that accompanied the Honourable Patty Hajdu, minister of Indigenous Services, on a trip to Aotearoa (New Zealand) from August 22-28.

They were joined on Canada’s delegation by Dr. Brenda Gunn, of the National Commission for Truth and Reconciliation, Gerri Sharpe, president of Pauktuutit Inuit Women of Canada, and Sharon Nate, executive director (education) of the Matawa Tribal council.

During this visit, Minister Hajdu signed the Indigenous Collaboration Arrangement (ICA) on August 24 between the government of Canada and the government of Aotearoa-New Zealand. The ICA will promote and facilitate the socio-economic, political, educational, well-being, cultural and environmental advancements of Indigenous peoples in both countries. The ICA will be overseen by the Department of Indigenous Services Canada and the Department of Crown-Indigenous Relations and Northern Affairs for Canada, and Te Puni Kokiri (Ministry of Maori Development), for the government of Aotearoa-New Zealand.

“The deepening of the Canada-New Zealand relationship on Indigenous trade issues and inter-governmental collaboration is a powerful catalyst for change,” said Ms. Madahbee Leach. “Both Canada and New Zealand are beginning to understand the value and complexities of Indigenous knowledge and kinship. Indigenous and non-Indigenous communities alike prosper when Indigenous jurisdiction and authority, and cultural values and languages, are affirmed and celebrated, when fair solutions to land-related claims are implemented, and when reliable community infrastructure is realized.”

“Sharing knowledge in partnership and increasing the participation of Indigenous people within the domestic economy and international trade will benefit all of Canada and New Zealand,” said Ms. Madahbee Leach. “The relationships we create and nourish today between the Indigenous peoples of Canada and the Maori of Aotearoa New Zealand will help ensure the wellness of our future generations.”

Minister Hajdu said, “Leading this delegation of incredible women has been inspiring, moving, and has helped to strengthen and build new relationships with the people of Aotearoa-New Zealand. Our meetings with Maori, government agencies and local communities taught us so much, and reaffirmed the need to continue our work to honour, respect, and uphold the rights of Indigenous Peoples. Our newly signed Indigenous Collaboration Agreement will create formal ways for our two countries to do this work together. Tena Koutou to all who welcomed us so warmly to Aotearoa-New Zealand, and to the Indigenous delegation who joined us on this trip. We have learned a lot from each other. Now we go forward to create better futures for the next generations.”

By developing relationships and supporting knowledge sharing practices, the Arrangement will also provide a consistent mechanism for collaboration and engagement. Additionally, it will enable information sharing between the two countries that will facilitate the development of culturally appropriate policies, programs and projects while affirming the rights of Indigenous Peoples in each country.

The visit builds on Minister Mahuta’s previous visit to Canada in November 2021, as well as the momentum of Canada and Aotearoa-New Zealand’s endorsement of the Indigenous Peoples Economic and Trade Cooperation Arrangement in December 2021.

Since 2020, government officials from Indigenous Services Canada, Crown-Indigenous Relations and Northern Affairs, and Te Puni Kokiri (Ministry of Maori Development) have been working together to draft the arrangement, in consultation with Indigenous partners in Canada and key Maori leaders and stakeholders. “The arrangement follows the signing of the Indigenous Peoples Economic and Trade Cooperation Arrangement (IPETCA) last year and is just another step in our shared journey of reconciliation,” said Minister Hajdu.

“The Arrangement, unique to Canada and Aotearoa-New Zealand, builds on IPETCA and supports relationship-building, collaboration, and information exchange between Indigenous Peoples around economic, cultural, political, social, and environmental policy issues. Through the contributions of First Nations, Inuit, Metis and Maori, Indigenous ideals, aspirations, and worldviews are woven directly into the fabric of the arrangement, ensuring that it is Indigenous-led and government-enabled,” continued Minister Hajdu.

Minister Hajdu explained, “during the first year under this arrangement, we have committed to focus on promoting the recognition of Indigenous rights and collective responsibilities, and continuing our work to implement the United Nations Declaration on the Rights of Indigenous Peoples, advancing self-determination by exchanging information and sharing initiatives and best practices, developing and delivering quality and timely services with, for and by Indigenous Peoples in core areas such as education, and services for families, children, youth, women and gender-diverse people, supporting the physical, emotional, spiritual and mental health and well-being of Indigenous Peoples and communities and sharing data with each other to improve the visibility of Indigenous Peoples in national statistics.”

“Going forward, we will also continue supporting approaches to ensure Indigenous participation in the international space, including at the United Nations, the Organisation for Economic Co-operation and Development, the Asia-Pacific Economic Cooperation, and other related international initiatives,” said Minister Hajdu. “The signing of this arrangement is just one step, but with many more to come. Together, with Indigenous partners, leaders, and representatives, we will continue to advance the priorities and self-determination of Indigenous Peoples in both Canada and Aotearoa-New Zealand.” 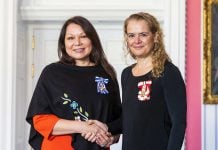