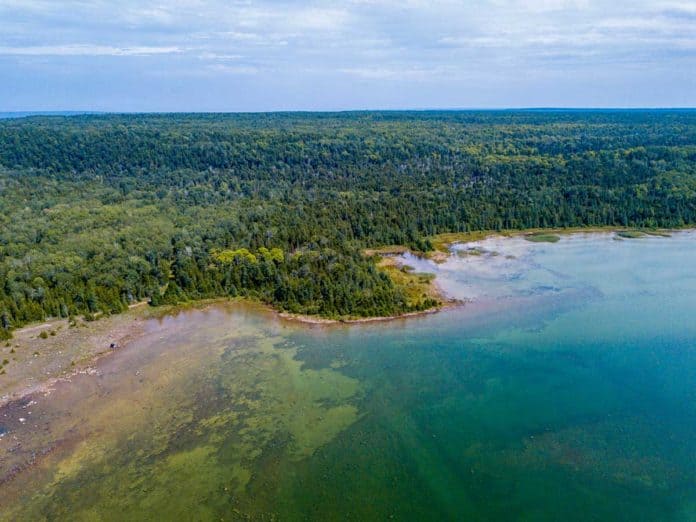 WESTERN MANITOULIN – The Nature Conservancy of Canada (NCC) is aware of the concerns local townships have with potentially lost taxes and access to property if NCC is able to purchase the Vidal Bay forest and shoreline property. A neighbouring municipal representative says the key is for local townships to have a long-term agreement in place with the NCC (that basically would have the latter pick up the tab for the loss of taxes they would face).

“Yes, we are well aware of the concerns of the local residents and communities in terms of taxes and access (to property),” said Esme Batten, NCC mid-western Ontario program director, on Monday. “We have talked to a couple of representatives of the townships (Robinson and Dawson) including Tim Mackinlay, chair of the Robinson Local Services Board (LSB), and we told them we are really happy to work with them on these concerns. But we can’t make any type of commitments until we secure the property. Then we can discuss issues like taxes.”

Ms. Batten said, “we have talked to the vice-president of the Dawson Citizens Improvement Association (DCIA), Joe Weston, who submitted some information on behalf of both townships. We want to work directly with both townships.”

Ken Noland, reeve of neighbouring Burpee and Mills Township said the key in looking at the potential tax loss for a municipality with NCC purchasing a property is that once the NCC purchases a property, it is not required to pay taxes. “When NCC purchased property on Cockburn Island, an agreement was put in place with them and NCC that the NCC would offset costs that Cockburn Island would lose in tax revenues.”

Mr. Noland said that (if NCC purchases the Vidal Bay property) “the townships should strongly suggest a  similar agreement be put in place. Cockburn Island reached an agreement with NCC; if they hadn’t, they (Cockburn Island) would have lost the tax revenues on the property purchased. They need to make sure they get an agreement in place and the NCC has to be willing to make a deal; because when they purchase property they automatically get a tax exempt status. They are not required to make an agreement, but the townships need to have this in place and make sure it is signed by those in authority and that it is a public agreement.”

Reeve Noland noted that for the Misery Bay Park (within Burpee and Mills) “this is provincial and we receive grants in lieu of taxes,” explaining that in Burpee and Mills property owned by the NCC and the Escarpment Biosphere Conservancy, “the tax exempt status property that we lose in revenues from tax exempt is between $14,000-$15,000 per year. The assessment value of the properties that are tax exempt are $1.43 million and this is all on the municipal side (not including the education tax).

Joe Weston, vice-chair of the Dawson Citizens Improvement Association said “I am on the ground floor of all of this being a volunteer with the NCC after seeing some of the work they did on Cockburn Island. Because of their holdings on Cockburn Island, most residents on the Island assist them in trail development and maintenance. There seems to be two concerns—taxes and access to the property.” He pointed out in other areas that NCC owns, activities like hunting and snowmobiling have continued after the lands have been purchased. Hunting for instance has continued on Cockburn Island.”

“With the agreement made by Cockburn Island with the NCC, the NCC indicated that if there was any Effect on their tax base that they would be paid (by NCC) to offset this,” said Mr. Weston. “That way the tax base is not affected.”

Mr. Weston noted that the Dawson LSB and roads department have estimated that they would lose approximately $3,900 in tax revenues to the township. He also learned in talking to the director of the Robinson LSB they could potentially lose $4,000 in taxes if NCC purchased property in their township and these costs were not offset.

“I’ve heard no complaints on either of the issues with taxes or access from Cockburn island,” said Mr. Weston. “When the NCC first purchased the property there were huge concerns among residents. People were reluctant to accept them and NCC sat down with council and the local sports and conservation club and ironed out a 15-year trail agreement.”

Mr. Weston pointed out Manitoulin Snowdusters snowmobile trails are currently running through the Vidal Bay property. They (NCC) talked to the Snowdusters and the trails will remain for the next year and then this will be reviewed as well if they purchase the property. But I’m sure this activity will continue as well.”

“I’m a landowner (in Dawson Township), a supporter of the NCC and with the way this was worked out in Cockburn Island it has been a good thing. When they ask for assistance for work on their trails for instance there is no shortage of volunteers to help out,” continued Mr. Weston.

“We will be in contact, in communication with the townships,” Ms. Batten told the Recorder. She noted, “all our properties in Canada are basically open to the public and for example hunting has continued in the Queen Mum Park (on Manitoulin). If we are fortunate to purchase the property, we will have to put a management plan in place with the townships and area residents.”

“We understand taxes and land access are concerns and we’re more than happy to work with the local community to see what we can do to alleviate these concerns,” added Ms. Batten.

If the NCC can make the property purchase happen, it would expand the group’s protected area to roughly 250 square kilometres.