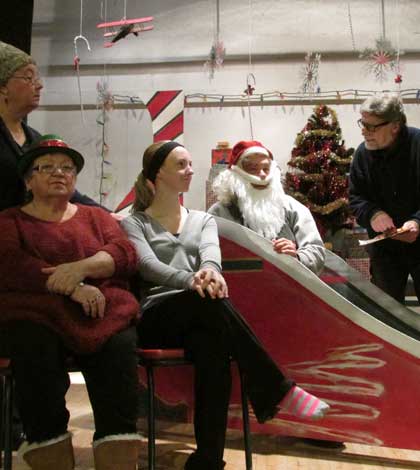 GORE BAY—I saw a preview of this terrific Christmas production the other day and without a doubt area audiences are in for a real Christmas treat. It is truly wonderful holiday entertainment, which I guarantee will put the entire family in the Christmas spirit. I did not stop smiling or laughing from start to finish of ‘Dear Santa.’

The first thing you notice when you enter the hall are the decorations and set. It was like entering a Christmas wonderland filled with presents, Santa’s sleigh and dozens of toys, which were hand made by the late Vincent Evans. The colour, lights and entire setting is enchanting, like nothing I have ever seen in a Christmas production.

The set is also used in a very imaginative way. The sleigh triples as a toy car, a sleigh in Santa’s workshop, and a desk in his office. Decorations throughout the entire Gore Bay community hall will captivate not only youngsters, but the child in all of us.

A group of elves played by Sophie Hietkamp, Malia Leighton, Mason Leighton, Dream McLaughlin, Ayriell Nodecker, Madison Swihart and April Torkopoulos will greet you as you walk in with programs. They are also busy wrapping toys for Santa’s journey. They appear on stage as well throughout the production and also double as choir members. They provide a great deal of humour in the production and play their roles wonderfully. The wonderful elf costumes were designed and made by Kim Kelly.

There are also six adult characters in the play and each one was completely different. Santa’s chief of staff, an officious, stern and by-the-book character is played by artistic director Walter Maskel. He is oblivious to the advances of Santa’s housekeeper, Octavia, played by Susan Garlock. This is the source of a great deal of hilarity and we are also treated to her wonderful singing during the scene changes.

Newcomer Lori Evans is the sleigh saleslady Lou Flapdoodle, trying to sell a new top-of-the line sleigh to Santa Claus and we laugh at her over-the-top sales pitch. Kayla Greenman plays Kit Bishop, an adolescent who learns a great deal about herself and Christmas. An actress from Toronto, Kay Valentine, plays Bozidar, Santa’s helper who is not entirely fluent in the English language. Her garbled speech will have you in stitches.

And rounding out the cast is of course, Santa Claus, who is jolly and always hungry, but we also see the human side of Santa, played by Vincente Belenson. When he dresses up in his red suit at the end of the play and gets ready to leave the North Pole to deliver the presents, his final speech will have you thinking about the true meaning of Christmas.

All the characters give terrific performances and work like a seasoned ensemble. It was a joy and pleasure to watch these very strong and confident performers.

Although some of the humour will go over the head of the youngsters in the audience, they will love the cartoon caricatures of the characters as well as the physical sights, gags and colour of the production.

Since ticket prices have been slashed by Gore Bay Theatre for this production to make it more economical for families to attend, I cannot think of a better Christmas present for the entire family for two hours of entertainment for this calibre of theatre.

Producer Walter Maskel and director Andrea Emmerton have pulled out all the stops to provide audiences with a hilarious and magical live theatre experience, which is perfect for the Christmas season. Mr. Maskel said, “Andrea and I work very well together and this kind of collaboration can only grow for the benefit of our group and our audience members.”