MANITOWANING—Debajehmujig Storytellers’ 6 Foot Festival was held over Thanksgiving weekend and boasted a wonderful collection of work exploring the theme of the Four Kingdoms: mineral, plant, animal and human.

The festival started last Thursday night with a screening of the documentary ‘Seed: The Untold Story,’ part of the Taggert Sigel trilogy of food documentaries, with a discussion following.

“I filmed Brandon as he explored Manitowaning Bay and interacted with different elements,” explained Ms. Jackson, who is from Toronto. “It is a sensory experience of people’s interactions with the kingdoms. I recorded basic shots of the bays as well as sunrises and underwater.”

Ms. Ianusi’s song was, “composed with the four kingdoms in mind with the percussion building on the animal and mineral kingdoms using the rocks and skin drum instruments,” explains a description of the project.

On Saturday there was a lunch with land-based workshop presentations going throughout the afternoon from artists and community members. In the evening there was a community jam session and potluck.

Samantha Brennan is a multi-disciplinary artist from Port Colborne. Her piece represents each Kingdom and is exclusively made of materials from the Kingdoms, while also containing pieces from all Kingdoms in a visual context.

Contained in three walls, one wall is created from a tanned hide and painted with blood, representing the animal kingdom; another wall is a large piece of bark painted with hoof and animal prints representing the plant kingdom; a sculpture of hands made of clay from the Debaj garden incorporates the mineral element; while the human element is those who interact with the piece. Ms. Brennan has stations (hide and blood, natural pigments and bark, and clay) set up along the perimeter inviting others to add to the piece.

“I am hoping that others will help build the piece throughout the festival,” said Ms. Brennan as she set up the exhibit last Thursday.

Garrett Corbiere of Wiikwemkoong chose to work with acrylic on canvas for this contribution to the festival.

“I have been exploring acting, improv, beading and painting during my internship with Debaj,” Mr. Corbiere told The Expositor. “It has been a great experience. For this project, I wanted to paint and I represented each of the Four Kingdoms with separate paintings and then did a final piece incorporating them all.” 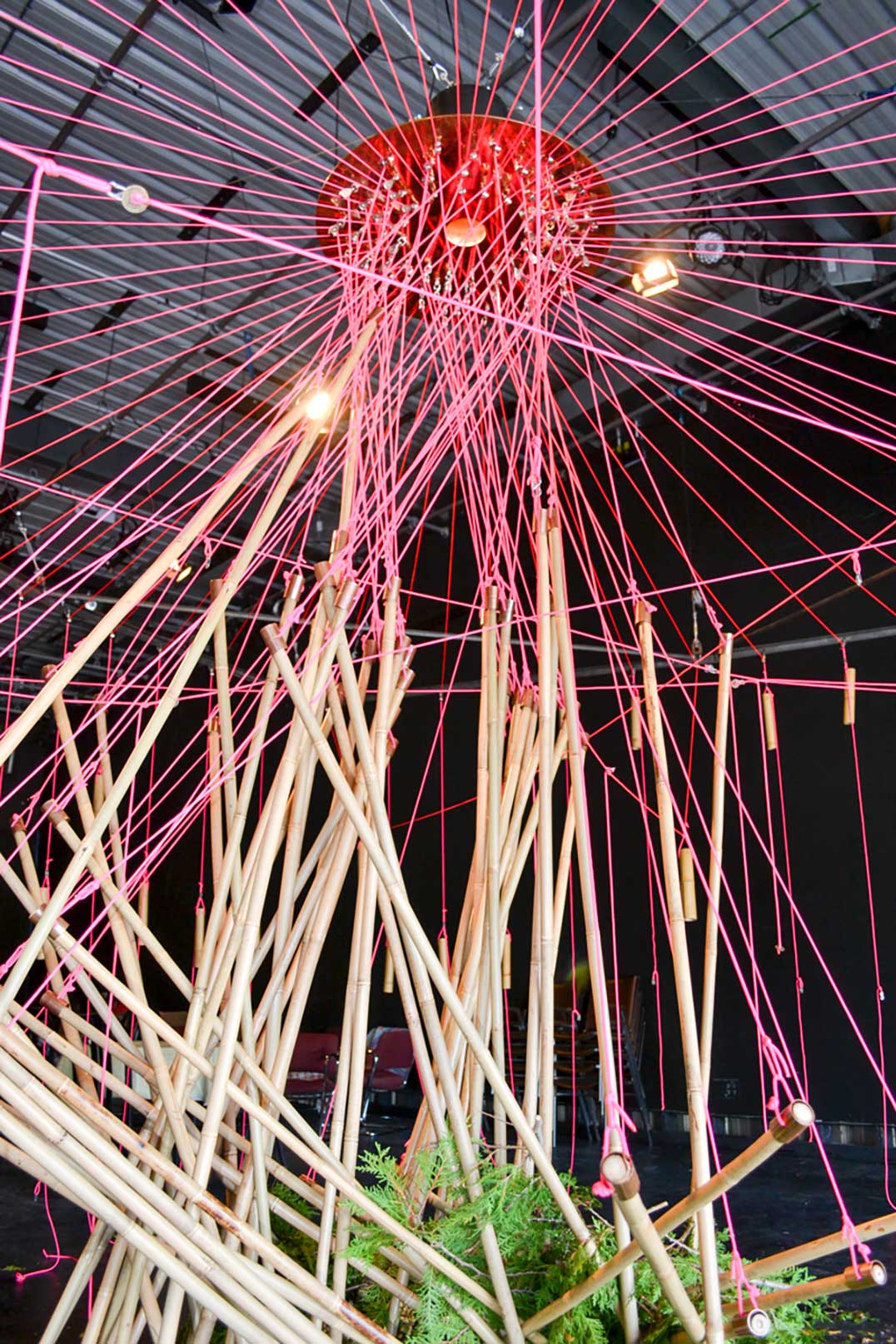 “When all Four Kingdoms reside with each other, it gives us the beauty we see every day,” he noted. “The Four Kingdoms is creation, and us as humans, one of our greatest gifts is to enjoy creation.”

Sheila Trudeau, also from Wiikwemkoong, explored teachings she had learned from Debaj and the heritage of her family, going back generations, through a land-based interactive piece.

At the centre of the connected statues is a house with a mat. Ms. Trudeau lifted the mat and used a broom to swept words laid on the ground under the mat, representing intergenerational traumas, which have been “swept under the rug” by society. A bucket of water symbolically pours water onto the words under the mat, washing away negative elements in hopes of a positive change.

“The water represents positive aspects such as art, talking, sharing and forgiveness which will lead to healing and help us move forward,” said Mr. Trudeau.

Kady Peltier attempted to create a “tranquil space” with her installation. Leaves cascade from the ceiling as a projection of the Four Kingdoms plays in the background and a small fountain brings forth the sound of serenity.

“I wanted to create a calm space where people could relax and reflect on nature and the Four Kingdoms,” said Ms. Peltier.

Dance Machine was set up throughout the festival with artist Lee Su-Feh encouraging the interactive exploration of the kinetic sculpture that can be transformed into multiple configurations by the actions and movements of the bodies within it. Created out of 64 pieces of bamboo suspended from a central copper disk, batteryopera.com notes the sculpture “can be moved independently by artists and audience members to create an immersive experience.”

“We invite people to explore and engage with the piece and each other,” said Ms. Lee Su-Feh.

The 6 Foot Festival concluded last week, but there are always new and exciting projects at Debaj. For more information call Debajehmujig at 705-859-1820 or visit the Debaj website at debaj.ca.