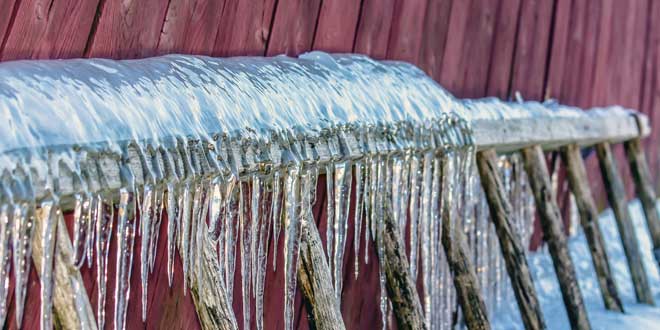 MANITOULIN—With below freezing temperatures lasting on into what will soon be spring (Thursday, March 20), municipalities across Manitoulin are facing a record number of residents calling in with frozen water lines.

Northeast Town CAO Dave Williamson explained that to date, 25 homes in Little Current have been faced with frozen water lines this winter.

He explained that when the municipal office gets a call about a frozen lateral line (the line that connects the home to the main line) the resident is advised to call a plumber, but if the freeze is within the main line, the public works crew will be dispatched to dig up and thaw the problem spot. (This occurred last month on Blake Street causing much disruption to the surrounding homes and the Little Current Public School.)

For a lateral line freeze, the plumber will determine where the blockage has occurred and determine whether this responsibility falls to the landowner, the municipality or a combination of both.

“One of the issues is where did it first freeze, but this is something they (plumbers) can’t tell exactly,” he added.

Ms. Clarke said there are currently six homes with frozen lines in Gore Bay and one frozen water main on Hall Street that is affecting one of those six people. The rest have all been asked to run their water.

Those six people are all running water hoses from houses whose lines aren’t frozen, the CAO explained.

“There’s one situation on Meredith Street where we ran a (garden) hose, but now that’s freezing,” she added.

Like the Northeast Town, if homeowners find themselves without water, they should call a plumber to determine the cause of the problem and to see if it can be thawed out. “It is your responsibility from the home to the shutoff valve,” she added.

Gore Bay has not seen such troubles with water lines since 1994. “And the six (without water) are all over the town,” Ms. Clarke observed.

Gore Bay has a list of people with historic line problems who are asked each winter to run their water and two of the six homes without water are on this list, the CAO explained.

Also last week, Gore Bay’s public works crew dealt with a water main break and discovered that the frost line is between seven and eight feet below ground.

The Sheguiandah First Nation is also relatively clear of frozen water lines, except for an incident over the Christmas holidays when a pipe burst in the community hall/kitchen area of the administration building. This area, which suffered some water damages, is currently undergoing renovations, explained receptionist Shelba Deer.

Meanwhile, both Central Manitoulin and the M’Chigeeng First Nation are boasting zero to almost no problems.

“We have not had one break so far,” said M’Chigeeng manager of public works Earl Debassige. “Knock on wood.” And Central Manitoulin CAO-clerk Ruth Frawley said her office has received one phone call from a Mindemoya business, but the freeze was deemed to be on personal property. She cited having a relatively new water system as possibly having an effect on their good luck.

Mr. Williamson explained that as the weather begins to warm, this actually drives the frost further into the ground as the snow cover, with its insulating qualities, disappears. This means things may only get worse before they get better in terms of burst and frozen water lines.

The CAO encourages homeowners, if they know they have had a problem in the past or just want to ensure this doesn’t happen to them, to keep a “pencil thin” stream of water running from a tap.

Ms. Clarke agrees. “If you’re going away, run your water.”

“But who pays for this water?” Mr. Williamson posed the question (the Northeast Town is on a metered water system). “The homeowner. But this is preventative and less costly than hiring a plumber.”

The CAO said the municipality wants to be fair and should a homeowner run an exorbitant bill as a result of running water to prevent a freeze-up, the matter could be discussed, but this would be on a case by case basis.

“In his 28 years with the municipality, public works manager Gary May has never seen it so bad,” he continued. “And as it warms up, more homes will freeze,” he warned.