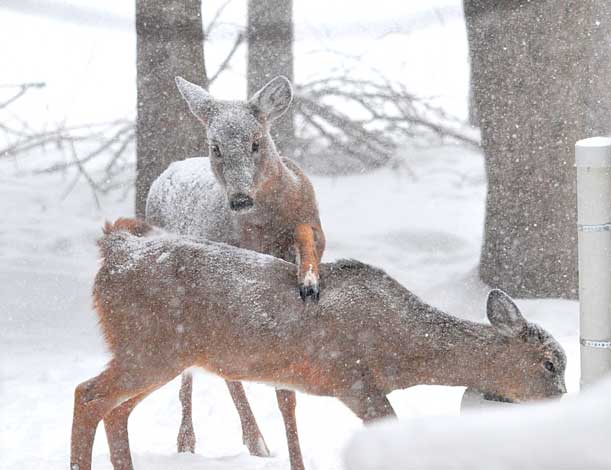 Extreme cold, deep snow in deer yards could be critical to survival of deer populate

MANITOULIN—The Manitoulin Area Stewardship Council (MASC) say the outlook for Manitoulin’s deer herd is so dire, thanks to a cold and snowy winter, that it’s up to the people of Manitoulin to step up and take action in order to save the population.

At a recent meeting held involving MASC, the Ministry of Natural Resources (MNR), Manitoulin and North Shore fish and game clubs as well as the Ontario Federation of Anglers and Hunters, talk focussed on the MNR’s winter severity index. This calculates herd survivability based on length of days, temperatures and snow depth—and the prognosis wasn’t good.

For North Shore deer, without human assistance in breaking trails, the herd loss has been estimated at 80 percent while for Manitoulin that number is slightly lower at 60 percent.

“We had a meeting last week where we compared snow depths, but we’ve had more snow since then and we will continue to get more snow,” Bob Florean, a member of MASC, told The Expositor during a telephone interview Monday.

Mr. Florean said that the largest herds could see between a 25 and 60 percent mortality rate, which includes aborted fetuses. In the Allan deer yard, the severity of the winter is compounded as the deer are standing in water which accumulated during the heavy fall rainfalls and, when combined with the snow on the ground brings the accumulated depth up to the deer’s chests.

“We are seeking volunteers to assist and support us with the emergency deer save work now being implemented,” Sue Meert, who has been hired by MASC to institute the program, said in a press release. “In particular, we need the involvement of landowners whose lands are located in key deer wintering yard areas. Approximately 80 percent of these landowners are off-Island residents and their approval is required before we can enter these properties to help the deer.”

Mr. Florean noted that MASC is insured for liability purposes through the Ontario Federation of Anglers and Hunters for those who might be concerned with allowing members of the deer save program on their property. Landowner permission slips can also be found on the MASC website, www.manitoulinsteward.org.

“For the past decade, winters have been relatively mild and there has been no cause to be concerned about our deer population,” the press release continues. “However, this winter is different—the prolonged periods of extreme cold with heavy snow accumulation are affecting the deer population’s survival, future health and reproduction rates. While most deer have migrated many kilometers to the winter yards they use in severe winter conditions, the yards are no longer offering sufficient relief from the harsh weather.”

Core winter deer yards run along the LaCloche Mountain range from the north shore of the North Channel and extend from Whitefish Falls west to Sagamok First Nation. They are also found along Manitoulin’s entire south shore and in areas such as the Bidwell yard north of Lake Manitou and the Allan yard between Gore Bay and Kagawong. In addition, many smaller yards also exist.

As part of the deer save efforts, those with properties containing large populations of deer are asked to either contact Ms. Meert directly or return phone calls if you have been contacted in order to initiate permission to enter the property in order to break trails and cut branches for the deer.

“Once permission is received, we are relying on volunteers to do the work,” Ms. Meert states. “Should the cold and snow accumulation persist, we will commence with feeding the deer and continue to do so as long as needed.”

Ms. Meert can be contacted through email, manitoulindeersave@gmail.com, or by calling (705)859-1187.

“The main message is to start breaking trails via snowshoes, snowmobiles or heavy equipment if you are near any of the deer yards,” Mr. Florean stressed. “It’s getting critical. The push is on to spread the word. If the community doesn’t get involved, it isn’t going to happen.”

Deer save information (along with a deer yard map) is also posted on the MASC website at www.manitoulinsteward.org.

This is not the first time the Island community will have rallied to come to the aid of the deer population in harsh and snowy winter conditions but it is the first time in about 15 years that weather conditions have necessitated this call to action.

Interestingly, the week previous, at the joint annual meeting of the Manitoulin Soil and Crop Improvement Association and the Manitoulin Cattlemen’s Association, Manitoulin-North Shore agricultural representative Brian Bell had made some observations about the deer herd’s feeding habits that relate to the size of the Island herd.

Mr. Bell told the group assembled at the Spring Bay hall for the meeting that for the past 10 years he has kept a running tally of where deer congregate, the crop damages they incur as well as monetary damages subsequently borne by farmers.

Mr. Bell has determined that 50 percent of the deer herd is sustained by Island farms and farmers.

In other words, Manitoulin’s deer population is as large as it is because of the availability of farm-grown forage.