PROVIDENCE BAY – The Dewar family of Providence Bay is at it again with this year’s charitable auction beginning on Monday, March 22 for the first litre of maple syrup from their sugar bush—the seventh year in a row of sales that have raised thousands for Northern Cancer Foundation at Health Sciences North in Sudbury.

“COVID has slowed down many things in this world, but Mother Nature cannot be stopped and because of that it’s sugar shackin’ time. The Dewar family has been working hard to get that first litre of syrup made, and let me tell you, what fine syrup it is!” stated Travis Dewar in an email to The Expositor.

This year’s online auction begins this Monday at 6 pm and runs until Friday, March 26 at 6 pm sharp.

The first syrup auction took place in 2015 and the winning bid for the family’s first litre of the annual syrup run was $150.

Each year since then, the Dewars have run an online auction on their Facebook page, ‘Dewar Family Maple Syrup Shack.’ They make a post and bidders comment their pledges below the original post. Traditional auction rules apply—at the closing time, the highest pledge takes home the precious first litre.

“This is an absolutely amazing amount of money raised for such a great cause, and on behalf of the Dewar Family and the Northern Cancer Centre, thank you all so much for watching, participating or donating. You have all made this fundraiser a great success, and every dollar raised for this foundation positively impacts families in the North who are undergoing cancer treatment,” Mr. Dewar stated, adding that no family knows when they may need the services of the cancer treatment centre so the entire community benefits from its prosperity.

Everyone who donates will receive a tax receipt for the amount and the family has set up five secret milestone bids—anyone that takes the leading bid past one of the milestones will receive a sweet mystery treat.

Those wishing to participate should make sure that they are commenting their bids on the original post itself, not any shared versions, otherwise organizers may miss them.

The ground rules are the same as past years—bid aggressively to scare off the competition, trash-talk the fellow bidders to your heart’s content (while keeping things clean, this is a family auction), don’t get beat on your bid and make sure all bid increases are at least a dollar higher than the existing highest bid.

Anyone with questions about the auction should message the ‘Dewar Family Maple Syrup Shack’ Facebook page or contact Mr. Dewar at 705-929-3137 for more details. 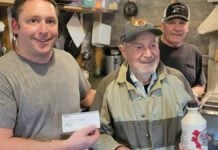