The honour is awarded to four individuals by Theatre Ontario once every five years. The award honours their contributions to community theatre in the province. Theatre Ontario was formed to support, promote and assist educational, community and professional theatre in the province and Michael Spence was one of its founders. The award is given in his name to celebrate his vision and legacy.

Mr. Maskel said he was thrilled when he heard the news.

“I am really honoured to receive the award,” he said. “Theatre has enriched my life in so many ways. It gave me the confidence to be an educator, to accept positions of leadership and I met my wife of almost 30 years through theatre. To be acknowledged by my peers, my fellow artists in theatre are very special and something I will always cherish.”

During the past 40 years, Mr. Maskel has acted, designed, directed or has produced in more than 150 productions, including 42 musicals. He has worked in school, community and professional theatre and has written plays that have been produced by theatre companies.

“Presently, I am directing ‘The Attic, the Pearls and Three Fine Girls’ for Gore Bay Theatre, which will be presented in Gore Bay on March 9 and 10, and the following week at the Northern Ontario Drama Festival.”

Since moving to Gore Bay almost six years ago, Mr. Maskel has directed/produced 17 productions in Gore Bay. He has also been engaged in directing or holding workshops for numerous groups across the province. Although Mr. Maskel has been offered theatre positions in larger parts of the province, he has chosen to remain in the small community of Gore Bay.

“My wife Kathy and I enjoy the small town way of life,” said Mr. Maskel. “We have also lived in Massey, Espanola, Whitefish Falls, and in each town taken the local theatre group to festival victories. We retired in Gore Bay because of the beauty, the established summer theatre, access to top-notch medical care and the best golf course in Northern Ontario. Although we do not have the theatrical facilities and large number of actors that the cities have, we do have a committed and dedicated group. It is more challenging competing against the groups from the cities, and more rewarding when you do well.”

Rewards are something Mr. Maskel knows well. He has directed 16 Northern Ontario Festival productions and has received numerous awards, including eight for directing. At the Theatre Ontario level he has also received numerous awards, including eight for directing. He has also directed two productions that represented Ontario/Canada at international festivals, which featured plays from 12 countries including the United States, England, Italy, Ireland and Russia. He received the best director award at both festivals, as well as design awards.

Mr. Maskel’s plays have received the best production award at regional, provincial and international levels. In total, the plays he has directed have received more than 100 awards, 48 of which he was personally cited for. He is the most award-winning artist in community theatre in the province.

As an educator, Mr. Maskel’s theatre programs were very successful and featured on CTV’s Focus North. He was hired by the Ministry of Education and worked as an arts consultant, developing and presenting workshops and professional day activities for thousands of students, teachers and administrators across Ontario. He has also been the keynote speaker at various conferences and sat on numerous arts and theatre boards. As well, he has received many awards as an educator including ‘teacher of the year’ and an honorary award by Thorneloe University for his contribution to theatre in Northern Ontario.

Well into retirement, Mr. Maskel still works with young actors. “I have always been a strong advocate for children’s theatre and musicals which feature young actors,” he told the Recorder. “I will go out of my way to do workshops for students across the region for expenses only. I have worked at certain schools on a regular basis and am pleased to offer my knowledge about dramatic arts to help students understand, appreciate and enjoy lifelong benefits of this wonderful art.”

Many of Mr. Maskel’s former students are now working as arts educators, or in community and professional theatre. He will receive the Michael Spence Award at the Theatre Ontario Festival in May. 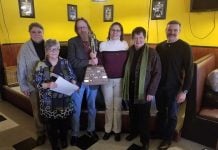