KAGAWONG—Jason Quinlan of Kagawong has had an interest in dog sledding from a young age and when he was old enough, began buying dogs and establishing a team.

“I remember my dad bringing home a photo of a guy who was going to the Yukon with his dogs to race,” said Mr. Quinlan. “In 2003 I started learning more about dog sledding and building my team.”

Mr. Quinlan said he learned from books and acquired a mentor, a friend he still has today, who taught him about sleds and the lines (that the dogs are attached to).

“My mentor John had Siberian huskies and taught me a lot about them which is why I started with them,” said Mr. Quinlan, who noted that his dogs’ bloodlines track back to the 1920s.  “There is a lot of history in the breed.”

Mr. Quinlan and his family currently have 14 dogs ranging in age from five to 10 years. All are Siberian huskies except one, an Alaskan huskie named Leda.

“I use to do 6 miles sprints with the team but it took me as long to get ready as it did to do the race,” laughed Mr. Quinlan. “We don’t really do races very often anymore—they are costly and take a lot of time and training.”

Mr. Quinlan talked about how he had done a 30 mile race, but explained that Siberian huskies are good with long distances but slow in comparison to their  Alaskan husky counterparts.

Mr. Quinlan, his wife Jenn and four children moved to Manitoulin in 2016 “for a change of scenery.” Mr. Quinlan began as the operations manager for Split Rail Brewing in Gore Bay, while Ms. Quinlan started at Manitoulin Transport.

The Expositor quickly learned during its Tuesday morning visit to the Quinlan’s Kagawong home that sled dogs are a lot of work.

“We feed them twice a day and take them out for rides two or three times a week,” he said. “Sled dogs are bred for a purpose and love doing their job. They have so much fun going out with the sled. Depending on the conditions we use a four wheeler.”

Each morning begins with Mr. Quinlan, with the help of his family, preparing and feeding the 14 dogs. 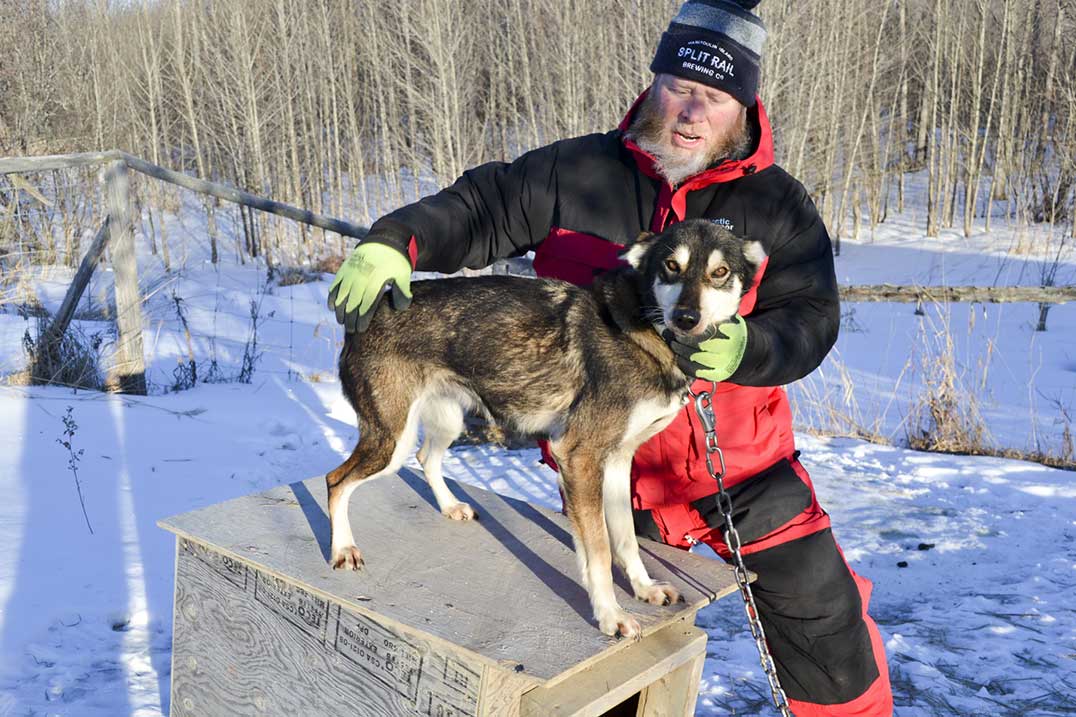 The team eats a high calorie diet of dense food made for working dogs. Water is added into the food (a mix of raw meat and special kibble) to help the dogs stay hydrated in the winter. In addition to their meals they get snacks and lots of water after runs.

After each dog is fed, Mr. Quinlan cleans up their fenced-in yard and gives each dog an individual visit.

“It’s important that I visit with each of them individually each day,” said Mr. Quinlan. “It lets me spend some one-on-one time with them and check each dog to ensure that they are healthy and happy. There is a lot of work that goes into caring for the dogs behind the scenes.”

When it is time to take the dogs out for a run, the dogs selected for the team are placed in their harness (each specific to them) and taken out and attached to their position on the line.

If there isn’t enough snow to go sledding, Mr. Quinlan attaches the lines and dogs to a four-wheeler.

“It’s all about safety first,” Mr. Quinlan told The Expositor, “for the dogs and for people. Icy conditions are hard on the dogs and make things dangerous.”

When training the dogs for a specific event, Mr. Quinlan takes it slowly.

“Sled dogs are long distance athletes,” he explained. “I train them in stages and each season we start over. We go slow at first, getting the muscles developed and conditioning the ligaments and joints. Dogs will inherently go as hard and long as you let them, but you need to control the team so they don’t get injured.”

Mr. Quinlan said that his dogs also look forward to events and getting to visit with the public.

“They get a lot of enjoyment from running and going out and meeting people,” said Mr. Quinlan. “We also take people out for sled rides, which the dogs really enjoy.”

When asked if Mr. Quinlan and his team will get back into racing he replied, “Who knows. Right now I am just enjoying the journey. Dog sledding has been part of my life for the past 20 years and I hope it can continue to be.”

If anyone is interested in Mr. Quinlan and his team attending an event or if you are interesting in arranging a ride you can contact him at 519-331-1888.