MANITOULIN—Brothers Devin and Justin Lockeyer, former members of the Sudbury Nickel Capital Wolves team that won the national Telus Cup Canadian midget AAA hockey championship, and Don Prescott, a long-time athlete, coach and executive on Manitoulin Island, will be inducted into the Greater Sudbury Sports Hall of Fame on June 12.

Peter Michelutti Jr., coach of the Sudbury Nickel Capital Wolves championship team which will be inducted in team category at the Hall of Fame, told the Recorder on Tuesday that the Lockeyer brothers were two of the key members of the team. “Both Justin, as a 15-year-old, and Devin, who was added to the team later in the season as a 17-year-old, were key contributors to the team.”

“Looking back at all of it, it was something special with what the team accomplished, but it is something the staff and players will remember the rest of their lives. It was a unique group that just found a way to win, played a system and played for each other,” said Mr. Michelutti. “A lot of the players had come back that year to play again. We had come close to winning the year before, getting to the finals, but a team from Sault Ste. Marie won. Our players decided they would come back the next season because they knew they had missed out on something special. Both Devin and Justin had good seasons, not just in the playoffs.”

“It was kind of a shock to hear the team is going to be inducted into the Sudbury Sports Hall of Fame, but not too much because that same year we had been entered as Team of the Year for the Sudbury Sports Hall of Fame,” Devin Lockeyer told the Recorder Tuesday.
Mr. Lockeyer pointed out, “it is kind of fitting that our team is being inducted at the same time as Don (Prescott). We would have likely been in attendance at the dinner for his award.” He said about a week or two after being notified that Mr. Prescott will be inducted into the Builders Category at the hall of fame, the captain of the Wolves team “contacted the rest of the guys on the team and told them our team had been chosen as well.”

While he saw some of his Nickel Capital Wolves teammates last year during the 10-year reunion when Sudbury was hosting the Telus Cup, this will be the first time everyone on the team will all be together at the induction ceremonies, said Mr. Lockeyer. “It will be good to see everyone in one place for the first time since we won. At this time of the year I can’t help watching the Telus Cup games and I think about what our team did at this time every year.”

In 2007-2008 Devin had started the year playing for the Manitoulin Islanders but with a coaching change in mid-season he wasn’t getting much playing time. He informed his parents around the first of December he wasn’t happy with his situation and it was then he got a tryout with the Wolves. “Justin was already there and they brought me in for a skate. I played a game for the Islanders around December 15-16 and I joined the Wolves the first game after Christmas. We tied Sault Ste. Marie 2-2 and both Justin and I got goals and assisted on each other’s goal. That is when I knew I was in a good place.”

“The Telus Cup was held in Arnprior that year and as the week went on we would see more people that we knew from our area supporting us. It got crazy on our side of the rink by the championship game,” said Devin. He added it was extra special that both he and his brother played on that team and won the Telus Cup. “We had played on the same team basically from house league, the Manitoulin Panthers to AA hockey and up.”

Winning the Telus Cup, “was the highest achievement you could ask for,” said Devin.

Mickey McKinny, a fellow member of the Greater Sudbury Spots Hall of Fame, stated that “Don (Prescott) has quite the resume in sports to say the least. He played in the International Hockey League, played football and hockey, was a member of the Sudbury Wolves and much, much more.”

Mr. Prescott was born in November of 1932 in North Bay. He is the eldest child of 12 born to the well known Harold and Esther Prescott.

His son Delroy’s scrapbook clippings of father starting in 1946 showed that Don excelled in sports throughout his youth. He led Gatchell to NBM championships in both bantam and midget. Often captain of his teams, he won the Most Valuable Player and top scorer award several times. Mr. Prescott was also captain of the Sudbury Tech Hockey team that won NDSSA in 1949. He also played both basketball and football.

Mr. Max Silverman, a sports legend in Northern Ontario, personally recruited Mr. Prescott for his new Junior Wolves team. He arranged for Mr. Prescott to have a summer job tying rebar on the Sudbury Arena construction. Mr. Prescott signed a tryout agreement with the Boston Bruins. In 1952, Mr. Prescott went to Toronto to attend Ryerson Polytechnical. Once again clippings show Mr. Prescott was team captain of the hockey team, top scorer and also played football. He was a nominee for outstanding athlete in 1954. In 1955, Don played for the Indianapolis Chiefs of the IHL.

Moving to Capreol, Mr. Prescott was employed at Lowphos Ore and was the playing coach of the Capreol Chiefs of the very competitive Valley Hockey League.

Capreol was already on the fastball map with their very successful Mazzuca’s Senior Team and Mr. Prescott organized and coached a juvenile team in 1959. This was the core of junior teams that won All Ontario in 1961 and 1964. These juniors also played in the senior league and held their own against the likes of Bevliaqua, Szeryk and Thomas.

Even though Mr. Prescott was a young guy, his leadership skills were recognized by both the Royal Trading and later Nickel District Leagues as he served as both president and secretary-treasurer of each. Mr. Prescott then began umpiring baseball at Queens Athletic Field and was able to continue until he called a game for 50 consecutive years. He called many All-Ontario and league playoff games across Ontario.

After leaving the Chiefs dressing room after a game, Mr. Prescott was approached by the principal of the new Lo-Ellen Park Secondary School in Sudbury who asked if he had ever considered becoming a teacher. They wanted a proven hockey coach and this led to a 30-plus year career in education. Incidentally, the hockey team went undefeated, winning NOSSA.

Mr. Prescott was first elected to the Ontario Amateur Softball Association (OASA) executive in 1963. Almost always the sole voice at the table from Northern Ontario, he sat on the executive council for years then he had to work his way up the ladder through the three vice-presidents, finally becoming only the second person ever from the North to be elected president in 1979 in Sudbury. Mr. Prescott was re-elected in 1980 and then continued to remain active as a member of the Past Presidents Advisory committee.

Mr. Prescott led the Ontario delegation to the Canadian Amateur Softball conventions for several years. In 1980, he was also elected third vice president of the CASA. One of the highlights of this opportunity was being the Chef de Mission (manager) of the Gold Medal winning Team Canada at the Pan Am Games in Puerto Rico.

After chairing the committee that brought together the OASA, PWSA, and ORSA under one umbrella, Mr. Prescott was elected chairman of Softball Ontario, the new governing body for all softball in Ontario for several years.

In 1984, the OASA recognized Mr. Prescott with its  most prestigious award, the F.R. Feaver Award, which is given to an individual who through their dedication, service and devotion has played a major role in the development of Softball.
In 1989 Mr. Prescott was granted a life membership in the OASA.

As well, the Ontario government awarded him a Corp d’Elite Provincial Award for Volunteerism in Sport and Fitness.

Even with all his sports involvement, Mr. Prescott was also a local president of Jaycees and was later made a life member and senator. He served as Master of his AF/AM Lodge and after moving to Manitoulin served as secretary-manager of minor hockey for close to 20 years.

Son Delroy recalled asking his father how he felt about his long career as a coach, umpire and sports administrator. His reaction was that the accolades were all well and good, but he was much more proud of how many of the young men he had coached through the years had turned out.

“It’s fantastic news, the recognition for Don Prescott is long overdue,” said local sports organizer Greg Lockeyer. Mr. Lockeyer credits Mr. Prescott’s example with inspiring his own involvement in organizing sports for youth and he recalled the many long hours Mr. Prescott and his wife Naida spent preparing for the weekend ball tournaments on the Island. Delroy Prescott has also caught his father’s dedication to sports, umpiring countless numbers of games each year in the still quite healthy Island league.

Even as the Prescotts got older they were a familiar sight at Island games. “Naida could be seen at baseball games with pad of paper keeping score,” Greg Locker recalled. “At the Mindemoya Youth Ball Tournament last year one of the division champs took home the newly created Prescott Family Trophy in their hoonour.”

The Greater Sudbury Sports Hall of Fame 51st Sports Celebrity Dinner and Awards are to be held at the Caruso Club in Sudbury on June 12. 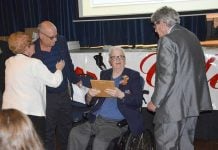