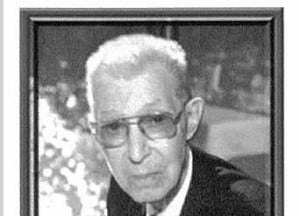 Donald A. Tracy died peacefully at the Algoma Residential Community Hospice Sault Ste. Marie on Tuesday, March 13, 2012 in his 90th year. Beloved husband of Louise for 65 years. Cherished father and father-in-law of Linda and David Maltby, Daphne and Roman Peredun. Loving Granddad of Andrew, Christopher (Emily), Katrina (Eric), Elizabeth, David and great-grandson Owen. Dear brother of Doug (Evelyn) of Little Current, Betty Cram (late Bill) of Pembroke, and Mary Ferguson of Sudbury. Step-son of Laura Tracy of Elmira. Fondly remembered by many nieces and nephews. Friends called at the Arthur Funeral Home and Cremation Centre on Sunday, March 18, 2012 from 12:30 pm until time of the service in the chapel at 2:30 pm. In lieu of flowers, memorial contributions to the Algoma Residential Community Hospice (ARCH) or the Lions Club of Sault Ste. Marie Memorial Fund would be appreciated. Thank you to the Bayshore nurses and the Red Cross workers, especially Delores for respite care. We would like to thank the staff and volunteers for the loving care Don received during his stay at ARCH. Don was a long time member of the Lions Club International, Fort Francis and Sault Ste Marie. Lions members are asked to assemble at the Arthur Funeral Home and Cremation Centre on Sunday, March 18, 2012 at 2 pm. Don served overseas with the Royal Canadian Signal Corps during World War II.