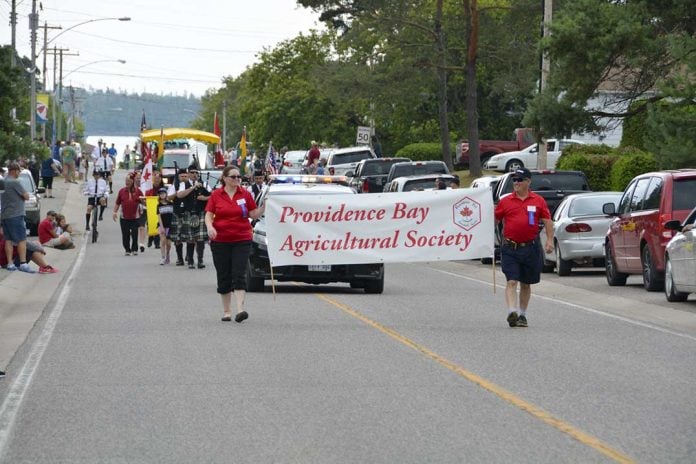 PROVIDENCE BAY – The Providence Bay Fair has reconceptualized its popular annual parade event to create a more pandemic-friendly offering this summer by hosting a drive-through parade on August 22, in which onlookers’ vehicles, rather than floats, are the ones that move among the displays.

“We thought it would be easier for people to stay in their cars and drive through instead of the other way around,” said Bev McDermid, who is spearheading the drive-through parade initiative.

The fair committee is organizing a stationary parade within the main laneway through the fairgrounds. Visitors can drive among the displays and will be given a paper ballot to vote on their favourite float or antique vehicle.

Results will then be tallied to determine which are the winning floats. There will be first, second and third prizes in each division, sponsored by Manitoulin Chrysler.

Ms. McDermid said she was unsure of how many floats the space could accommodate at this point but said interest in joining the lineup has already begun.

Having stationary floats opens new possibilities for creative construction—after all, a non-moving structure gives a considerable benefit in that the ground can be used to support components.

The fair’s theme for 2020 is ‘pioneer ways to modern days,’ which Ms. McDermid said would offer many possibilities for unique designs.

“I believe you can do a lot with that, especially working with things like haybales,” she said.

As for total capacity, Ms. McDermid said it would be tough to predict how many floats would fit until she could begin to conceive of their size, but she noted that they would have to be spaced out adequately.

“It’s a new thing and we don’t know how it’s going to work out. I think it’s feasible to be able to provide that bit of entertainment that the people of Manitoulin can go for a little drive and check things out,” she said.

The cut-off for registering for the parade is Wednesday, August 19, so organizers can begin to plan for the space available. Ms. McDermid said there were already four confirmed entries as of this past Friday, July 24.

Admission to the event is free and all are invited to register for a display, including individuals, families, community groups and businesses.

The drive-through parade takes place at the Providence Bay Fairgrounds on Saturday, August 22 from 11 am to 1:30 pm. To register a float or an antique vehicle, call Ms. McDermid at 705-377-4668 or email mcdermid@amtelecom.net.