GORE BAY – The Manitoulin-Sudbury District Services Board (DSB) has decided that maintaining the Woods Lane Apartments in downtown Gore Bay is no longer fiscally viable and will put the property up for sale.

In a report from the DSB’s property committee last week, it was recommended that the 10-unit (six bachelor, four one-bedroom) Woods Lane apartment complex be placed on the market, using an Island real estate agent. CAO Fern Dominelli told the board that while expressions of interest for the buildings were sought, none were received for either the Gore Bay property nor two other properties in Espanola.

As was reported previously, the projected cost of maintaining the Woods Lane units was expected to increase exponentially to $42.39 a square foot by 2023 from $1.15 in 2017.

All tenants will be informed of the intention to sell the property and DSB staff will begin to relocate them as units become available.

“Do we have places for these people to relocate?” one board member asked.

“We’re not going to give them eviction notices,” Mr. Dominelli responded. “If we do get a buyer, there will be conditions.”

“This is going to take a while,” said board chair Les Gamble.

When contacted for comment, Gore Bay Mayor Dan Osborne said he was pleased to hear the news and hopes that a private buyer will turn the aging complex into a waterfront gem for families and seniors.

“It would be an asset to our waterfront,” he told The Expositor. 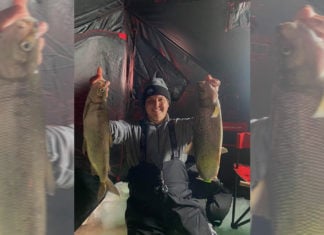 Expositor Staff - January 20, 2023
MANITOULIN ISLAND—Wikwemikong Tourism has partnered with the Explore Manitoulin and the Wiikwemkoong Anglers to enter Manitoulin Island into the Ontario Ice Fishing Challenge. This...