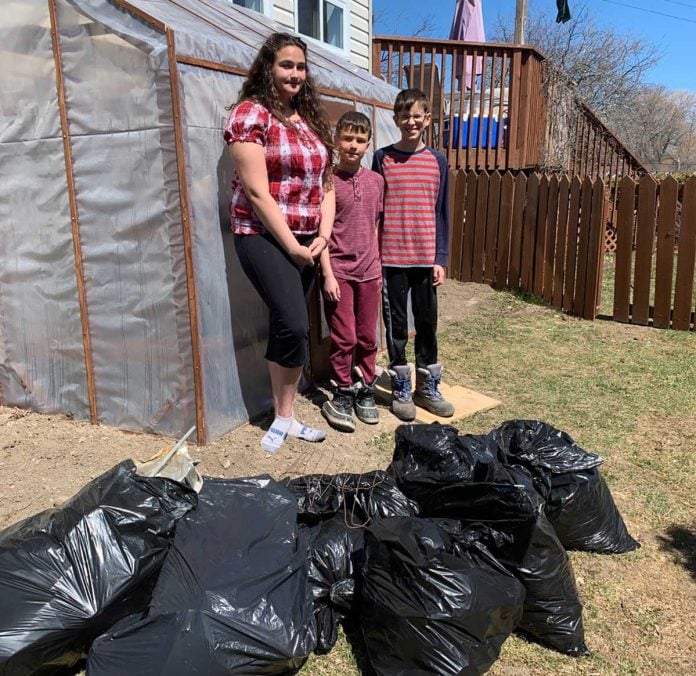 MANITOULIN – Earth Day took on a special meaning this year. With the pandemic, community events are not possible, but many people on Manitoulin marked the importance of nature in their own way.

Computer technology played a big role. Gary Fuhrman of Honora Bay posted a “thought for Earth Day” on his blog gnusystems.ca, which features pangolins, some of Earth’s endangered species. This shy, gentle little mammal has suddenly become a symbol along with pandas, elephants, and, closer to home, piping plovers. It’s a symbol of how humanity is driving wildlife to extinction. Pangolins live in tropical forests and roll up into a little ball for protection when they are frightened. They are the only mammals on earth that have scales instead of a fur covering. They only mate once per year, and most only have one baby, called a pangopup. The mother nurses her baby for about three months, and it stays with its mother for two years, until it reaches maturity. They cannot reproduce quickly and under the stress of captivity they usually die within six months.

The pangolins’ plight is a tragedy for them and for us. As Mr. Fuhrman comments, “This has a special meaning on Earth Day 2020, as it’s been suggested that the pangolin might have been a carrier of the virus that jumped to humans to cause the COVID-19 pandemic. The pangolin—poached, trafficked and endangered—is as innocent as the virus itself. If anyone is to blame for the pandemic, it is the humans who “‘make a living’ from an extractive economy which is destructive, on an overwhelming scale, to other players in the biosphere.”

Yana Bauer, who teaches at Manitoulin Secondary School (MSS), reminds us that “little things make a difference.” On Earth Day she and her family walked around the beach, downtown and along the highway at Manitowaning, with garbage bags to clean up roadside litter. They carried one bag for garbage and another for recycling. They filled six bags in just half an hour.

“It’s heart-breaking,” said Ms. Bauer. “My youngest said, ‘We shouldn’t have to do the same thing year after year and if people just stopped throwing things out, nobody would have to. If everyone had to clean it up, they might think more about throwing things out’.” Her family also started some seeds indoors for their garden, and this year they built a greenhouse.

Ms. Bauer is also active in the SHARE/Go Green student initiative at MSS. The Go Green Club is committed to reducing the school’s environmental footprint. Each classroom has a blue box to recycle paper and cardboard products, and there are dedicated bins for plastics and aluminum cans in the hallways and in the cafeteria, and even a compost bin. The club’s webpage urges students to “feed the bin!” The students participate in a number of activities, and one student suggested they should have an Earth Day every month to keep people aware throughout the year. Ms. Kuntsi said that as a certified school under Ontario EcoSchools, MSS has several initiatives, including a new Specialist High Skills Major program focusing on agriculture.

The Kuntsi family isn’t alone in marking Earth Day by picking up garbage. In M’Chigeeng, Winnie Panamick said the band office distributed posters asking for volunteers for their annual clean-up, and they provided bags and gloves. Ms. Panamick joined others helping out, some in the morning and others in the afternoon.

Maja Mielonen, well known for her advocacy of bicycling, reported that she and her husband cleaned up roadsides, and Ms. Mielonen used Facebook to encourage others to help out. They also planted and replanted seeds for a big garden this year. Joyce Young of Kagawong expanded their garden and planted fava beans to add nitrogen into the soil. She also ordered a children’s book, ‘The Little Gardener: Helping Children Connect with the Natural World’ by Julie A. Cerny for her grandchildren.

Chuc and Linda Willson of Ice Lake are also well-known here for their garden produce, and for running Kids Can Grow gardening projects at Island schools. Ms. Willson reported they were active on many fronts during Earth Week.

“We are growing a gazillion plants for our garden, she said, “And we continue to work on cleaning up our orchard area, making great nesting grounds for the endangered meadowlarks and bobolinks. At one time there must have been many larks in the area, since our road is called Meadowlark Place. So, we are happy to report that they are once again growing in numbers along that road named in their honour.” Both the eastern meadowlark and bobolinks are on the endangered list in Ontario.

Ms. Willson added, “I missed being at Little Current school on Earth Day when for the last 10 years I have done an activity with the kids. I am sad that Kids Can Grow is not happening this year but we are ever hopeful that at least we will be able to get our community gardens on Manitoulin open this summer. So, on Earth Day I was consulting with Sustain Ontario, the National Farmers Union as well as the agricultural critics for the Green and NDP parties to present a proposal, with adequate safety protocols, to reopen the community gardens. Growing our own food locally, in organic gardens is one way to lessen the impacts of climate change and to ameliorate food insecurity which is at an all-time high during this pandemic.”

Worldwide, the pandemic did not stop people from coming together virtually, through Zoom and other internet sites. WeDontHaveTime.org, based in Sweden, held three-hour videoconferences featuring some of the most successful projects to bring humanity back from the brink of climate catastrophe, highlighting Project Drawdown, the United Nations Development Program’s Mission1point5.org, the Exponential Climate Action Roadmap and other initiatives. In Canada, Corporate Knights held a videoconference, as did Ontario’s Clean Air Alliance. TVO aired the stunning Canadian film ‘Anthropocene: The Human Epoch’ and PBS aired Sir David Attenborough’s documentary ‘Climate Change: The Facts.’

Tia Nelson, daughter of the man who founded the first Earth Day in 1970, continues his work through Outrider.org. She said, “Environmentalism is not a partisan issue, environmentalism is a quality of life issue for all of us.” Earth Day is not the only recognized day to be mindful of our effect on the environment. Coming up, May 7 is World Migratory Bird Day, May 22 is the International Day for Biological Diversity, June 3 is Clean Air Day in Canada and World Bicycle Day, June 5 is World Environment Day. But really, the message is that every day is Earth Day.