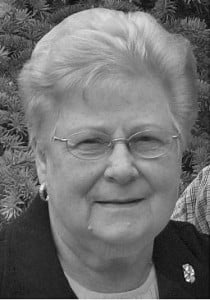 In loving memory of Elizabeth “Leona” Bock (nee Noble) who passed away March 27, 2012. Leona is survived by Arden, her loving husband of 58 years, and her two sons, John (Shirley) of Copper Cliff and Michael (Bonnie) of Edmonton, her sister Doreen MacEachern (Alex) of Naughton, her brother John Noble (Mary Lou) of Florida. She is predeceased by her parents Golden and Sadie Noble. She enjoyed her three step-grandchildren Kevin (Rhonda), Rachelle and Jocelyn (TJ). Leona was a kind and loving person who shared wonderful relationships with many people but there was a special place in her heart for Linda Gilchrist and Megan French. Leona loved cooking, playing games, travelling and was a woman of great faith. She will be missed by all who knew her. A memorial service was held in the R.J. Barnard Chapel, Jackson and Barnard Funeral Home on Wednesday, April 4, 2012 at 2 pm. Donations to the Canadian Diabetes Association would be greatly appreciated.