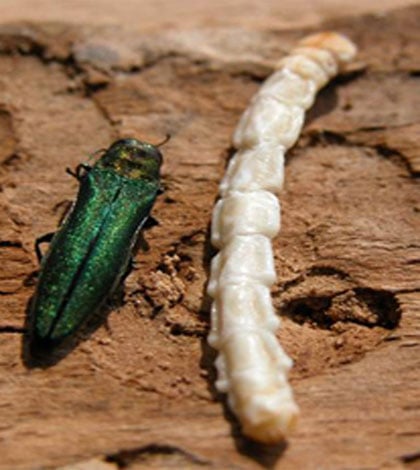 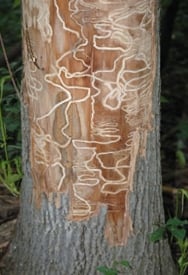 MANITOULIN—While scientists figure they may have found a predator to the emerald ash borer (EAB) in the form of a parasitic wasp Tetrastichus planipennisi (known to its friends as T. Palnipennisi), it may take years for it to come into effect and a local resident says its spread on Manitoulin is imminent if precautions are not taken.

“It is present on the Island and will spread every where,” said Jim Nies of Kagawong. He pointed out the EAB was introduced in the late 1980s. It is native to China, Korea and Japan and came to North America in packing crates.

EAB is 98 to 99 percent fatal to ash trees, although blue ash is somewhat tolerant of EAB. “It is going to have a profound effect on Manitoulin and will definitely change things. I’ve always felt it is better to be proactive and control the epidemic now instead of letting all the ash trees die and then deal with it later, when it will also cost a lot more to take care of.”

Mr. Nies pointed out some towns and areas around North America are doing a good job of handling EAB and he says the Island municipalities and residents need to do the same.

“Tree dies within three to five years,” said Mr. Nies. “There has been biological control with the parasitic wasp being released in Michigan and Wisconsin and a trial program is underway in Ontario.”

Mr. Nies said there are three main levels of concern with EAB and their affects on residences, communities and woodlots across the Island. And with the spread of EAB killing trees there is a real public danger. “Public areas such as paths, trails, parks present a real public safety problem because as the ash trees die they become dangerous. The trail along the Kagawong River from the bay to the falls is a prime example as there are a great many ash trees along its length and as they die because of EAB they breakdown and fall over.”

“Studies have shown that it is easier, cheaper and safer to be proactive than to wait until the trees die and then deal with the problem,” said Mr. Nies, who said local municipalities, councils, First Nations and agencies need to get involved in the problem.

And while the insect T. planipennisi has scientists excited that it may bring down the EAB, “this is good news but it will take years to be effective. But untreated ash trees will die,” said Mr. Nies. He said that restrictions in control spray and other deterrents is causing an even bigger problem. “In the US people can apply an insecticide from as close as one foot to the tree, and so can communities, but none of this is being allowed in Ontario. In my hometown, the town is working with individual property owners on the problem and in turn spreading the expense over 50 years. That’s the smart way to do it.”

Meanwhile, the London Free Press reported in its July 4 edition that Tetrastichus planinpeenisi is about the size of the narrow end of two stacked dimes, but may be just the insect to bring down the almost invincible EAB.

The Free Press reported that protected forest near Grand Bend is new ground zero for the first Canadian effort to control ash borers with a parasitic wasp, which slays the tree-killer by laying eggs in the borer’s larvae. However, it was pointed out this is in the trial stage and it could be years before it can be widespread enough to rescue the ash tree population from extermination.

Barry Lyons, a scientist with the Canadian Forest Service, who is spearheading the research with Natural Resources Canada, told the Free Press the wasp is a huge step in bio-control of the various ash borer that’s been out of control since it was discovered in North America a decade ago. He said the ultimate hope is that this parasite will knock back the population of ash borer to the point that some ash trees can recover and thrive again.

Mr. Lyons noted the chances the wasp would cause collateral damage are very remote and that is one reason the CFIA approved their test use for emerald ash borer. However, even if they are approved for general use it would be no quick solution to the problem. Michigan researchers began releasing the wasps in some parts of that state in 2007 and even though the wasps did exactly what they were supposed to do, and better than expected in some areas, only now are some trees there starting to bounce back. It may be years before these wasps are deemed ready for widespread use in Canada.

The Free Press reported ash borer control through quarantines and cull zones has proven so ineffective the CFIA has decided to throw its limited resources into monitoring areas where the bug hasn’t yet spread. Its new plan for next spring is to consolidate a patchwork of regulated zones into one expanded mega-zone, stretching through most of southern Ontario, from Essex to Parry Sound to Ottawa and cross the border into the westernmost parts of Quebec.

“The City of Whitewater, Wisconsin, my winter residence, has an aggressive program,” said Mr. Nies. “Every ash was identified, then categorized. All less valuable trees have been removed. Moderately valuable trees are being under planted and treated for a number of years, then removed when the new trees have some size on them. Some prime trees will be treated indefinitely. Individuals can sponsor trees. The town has had seminars for homeowners on treatment options and local hardware stores stock various EAB insecticides.”

Billings council recently passed a resolution in regards to EAB that states, “that the Township calls on the federal and provincial governments to take leadership roles in recognizing the need to support urban forestry by establishing urban forestry mandates and program which includes funding assistance to municipalities for the control and management of the emerald ash borer and any future significant imported diseases and insects as well as the creation and funding of programs designed to support the on-going sustainable management of urban forests.”

Insecticides to control EAB are tightly controlled in Ontario, pointed out Mr. Nies. TreeAzin, although approved, needs to be applied by trained and certified persons. 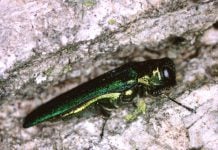 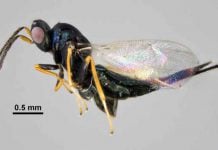