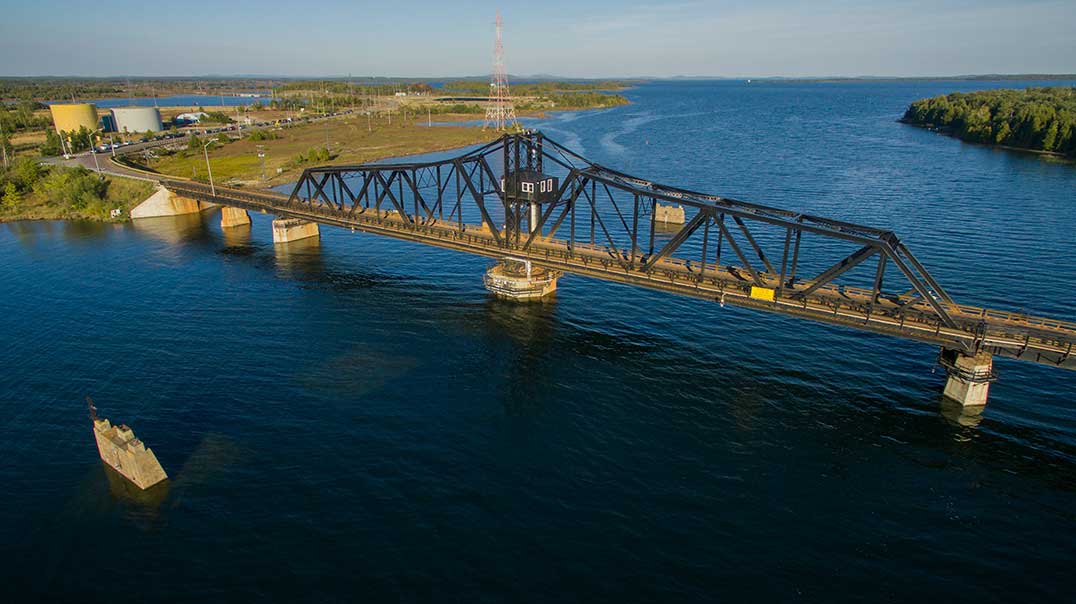 LITTLE CURRENT—The engineers overseeing the swing bridge study attended the August 7 meeting of Northeast Town council, sharing an overview of the project and the five options that will be studied during Phase 1 of the project. These options include: keep the current swing bridge, a car ferry, a tunnel, a movable bridge or a fixed bridge.

Gregg Cooke, consultant project manager with Stantec Consulting Inc. was in attendance along with Melissa Delfino, senior project engineer with the Ministry of Transportation (MTO) and Jason Ranger, also of the MTO.

Mr. Cooke reviewed the purpose of the study with council, noting that the bridge requires “extensive and ongoing maintenance” and “is nearing its end of service life.”

He noted that the study is expected to take three years to complete and will be broken into three phases. The first phase involves a transportation needs assessment and will look at the “big picture alternatives,” Mr. Cooke said, giving council the five options of keeping the current swing bridge, a car ferry, tunnel, movable bridge or a fixed bridge.

Phase 2 will develop the alternatives to the current bridge in more detail with one final option selected, while phase 3 will see the development of a plan, a Transportation Environmental Study Report, which will have a 30-day comment period.

“There will be many opportunities for consultation,” Mr. Cooke said.

Mr. Cooke and his fellow engineers also set up a booth during Haweater Weekend and spoke to about 70 people about the swing bridge project, he added.

“There will be lots of consultation, including with First Nations and businesses,” Mr. Cooke reiterated.

Next week, Wednesday, August 22, will mark the first public consultation meeting at the Manitoulin Hotel and Conference Centre between 4 and 8 pm. The next consultation won’t be for another year.

Mr. Cooke gave council a brief historical overview of the bridge, of its railway origins and its eventual use by rubber tire traffic. He also noted the study area, which encapsulates a rectangular area that takes in the whole of Goat Island’s south shore on its top end.

Mr. Cooke cited the problems with the swing bridge as being: year-round single lane road access, the fact the bridge is not available for use for 15 minutes of each daylight hour in the summer months (as long as there is boat traffic that needs to pass through) and its need of extensive repairs.

The opportunities cited were: an opportunity to improve traffic operation and access for all users; a reduction in operation and maintenance costs and improving reliability.

When discussing the alternatives, Mr. Cooke explained that with both the tunnel and fixed bridge options, it would mean a long approach would be required to achieve the necessary grade so the current entry and exit points would not be appropriate.

Mr. Cooke said his team has received lots of input to the initial mail-out and advertisement in this newspaper so he expects a good turnout on August 22.

Councillor Michael Erskine noted that the swing bridge is officially listed as an historic bridge in Ontario and asked what this means for the study moving forward. Mr. Cooke said the bridge is on this list and because of this, there is a process to evaluate the value of the bridge “and therefore what needs to be considered.”

Councillor Paul Skippen said he hopes the engineers take into consideration the safety concern with ambulances getting held up at the bridge. “It becomes dangerous,” he said. People getting held up on the bridge also translates into people speeding, he added.

Mr. Cooke said the project team will be talking to all the emergency services on Manitoulin.

Mr. Cooke acknowledged that should a fixed bridge option be chosen, this would mean moving the bridge’s location. He noted the disadvantages, calling them “trade-offs.”

Councillor Koehler also asked how deep a tunnel would have to be. “It’s deeper than we thought—five metres below the lakebed,” Mr. Cooke responded.

Councillor Gauthier queried the engineer on the Billy Bishop Airport tunnel in Toronto, joining the mainland to Toronto Island. Mr. Cooke said a tunnel is “doable,” but the difference with the Billy Bishop scenario is that it didn’t require a grade. Elevators and escalators bring pedestrian traffic directly from the surface up and down to the tunnel.

Councillor Laurie Cook asked about costing for the alternatives. It was explained that this would not be available until next year.

Councillor Bruce Wood suggested a tunnel could mean infrastructure for the piping of natural gas to Manitoulin.

“At this point, council hasn’t taken any position but I’m curious to find out where the entrance and exit points would be—these are things for council to consider,” Mayor Al MacNevin said.

“These issues are of particular importance to Little Current where people have established their businesses, and at considerable cost, including the hotel where you’re having your public information consultation,” the mayor added.

Mayor MacNevin also noted to Mr. Cooke that his figure of $18 million included one-time funding of $8 million when the bridge received a retrofit in time for its 100th birthday in 2013. “The $600,000 is skewed by that $8 million,” the mayor said, to which Mr. Cooke agreed.

Councillor Erskine said he would like specifics as to where the bridge would land and where the roads would come and go. “At what stage will we have those details?” he asked.

Mr. Cooke said this information would be available at the second meeting, next year.

The public consultation session will take place next Wednesday, August 22 at the Manitoulin Hotel and Conference Centre between 4 and 8 pm.