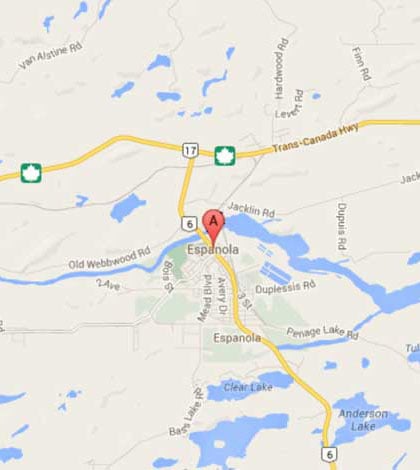 ESPANOLA—News from the Ministry of Infrastructure that a funding application to repair a choke point culvert crossing of Darkie Creek, just south of Espanola on a connecting link of Highway 6, had not made the cut in the latest round of funding for the provincial Municipal Infrastructure Investment Initiative (MIII) has sent politicians and bureaucrats scrambling over the past week. But all is not yet doom and despair.

Failure of the culvert in question would literally cut the road link from Manitoulin Island, Whitefish Falls and Whitefish River First Nation to the rest of the province, there being no viable alternative route. Espanola had been planning to apply to the province’s connecting link program when news of the program’s cancellation was announced—applications for funding for connecting links were to be sent to the MIII program whose deadline had already passed.

“It’s just one department,” said Espanola Mayor Mike Lehoux of the news that his municipality’s application had not been approved, adding that his conversations with the ministry have given him some hope that there will yet be a change of heart. “I think this might just be a case of one hand of the government not talking to the other.”

Algoma-Manitoulin MPP Mike Mantha said that he had immediately approached Minister Murray about the file as soon as he heard about the decline. “As soon as I got the news from Espanola on Wednesday I walked over to the minister and told him ‘you need to talk to your ministry and make them see how dire this matter is’,” he said. “He agreed.”

Mr. Mantha said that he remained confident that some solution will be found. “I have flagged it with him,” he said. “We will find a way to get it done. Too many people, businesses and communities depend on that link.”

“It is a serious matter,” he said. “The municipality can simply not afford the $1.3 million it will take to replace that culvert. We don’t have $1.3 million to do the job.”

Municipal staff have indicated that the municipality might be able to find the money to remove the culvert should it fail, but would not be able to replace it.

“Even the minister is upset with the connecting link mess,” said Mayor Lehoux. “He told us ‘this was handed to us by Mike Harris in the 1990s’.” The downloading of connecting links became a large headache for all of the municipalities right from its inception, explained Mayor Lehoux. “He didn’t think it was fair, especially for Northern municipalities, and especially the burden it placed on small rural communities like ours.”

The combination of ministerial support, pressure from the local MPP, the catastrophic potential of failure of the link with the possibility of incorrect data being utilized in the decision making process has left several doors open of hope for the community. But time will tell.

“We are only one small disaster away from having a big disaster on our hands,” suggested Mr. Mantha. “We can only hope wiser heads will prevail.”