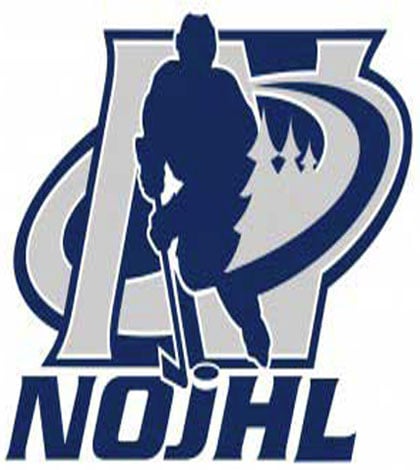 ESPANOLA—The Espanola Rivermen Junior A hockey team got off to a bumpy start in Kirkland Lake Friday night in their first game of a very young 2013-2014 NOJHL season. The first year Rivermen sniped a couple of quick goals early in the game only to fall 8-3 to the Gold Miners in Espanola’s first game back in the NOJHL since 2002-2003 when the club was known as the Espanola Screaming Eagles.

The Rivermen bounced back in game two of the two-game road swing Saturday night playing in as many nights to defeat the Abitibi Eskimos in the Eskies’ home season opener. This made for Espanola’s first win in Abitibi since November 10, 2001. The win was a convincing 3-1, letting the new club bring home a one and one record for a .500 win percentage in its first weekend back in the NOJHL in more than 10 years.

Head Coach Tom McCarthy was pleased with his young team’s first weekend on the road, “A 500 weekend is one we’ll take at this point of the season. With zero game time before the two-game road trip and in playing two consecutive nights, I was pleased on how we made the adjustments from Friday’s loss to Saturday’s win.” said Coach McCarthy. “We definitely have lots of work yet to do being such a young and inexperienced team. The best part of the weekend was how our players paid attention to the demands of playing solid defense in game two, the biggest difference from our first game Friday. As we continue to grow, learn and mature as individuals and as a team, the anticipation of where we’re going and who we’ll become is the exciting factor that will motivate us to improve every single time we hit the ice,” he added. “We truly look forward to the challenges ahead.”

Director of Operations Tim Clayden summed up the weekend. “We are younger and more inexperienced than ever before—we know we’re going to have some ups and down this season with our young team, but it will be a lot of fun watching Tommy do what he does best and go to work with our players this year. We need to be patient and grow together and when this team responds to Coach McCarthy the way we expect, this hockey club will be a fun team to watch.”

The Rivermen head to North Bay this Friday for the Trappers’ season opener, September 13 at 7:30 pm, at the West Ferris Community Centre. Not an easy task for any team thrust into rival barns for three home openers in a row, but a great experience for the Rivermen’s young and inexperienced team nonetheless.

“We know we are going to make some mistakes early this year and it will cost us some games, but that is how we will learn and get better and give Tommy even more of an opportunity to do what he loves to do: teach, coach and develop hockey players and young men like no other,” added Mr. Clayden. “We have great kids here this year and we are younger than ever before. This group is a lot of fun to be around. We will grow together and be ready for the real season”

This season promises to be very exciting for the Town of Espanola and area junior hockey fans, including the Lacloche region, the North Shore and Manitoulin Island and our many surrounding area First Nation community junior hockey fans.

Rivermen General Manager Randy Blake commented on his new team. “We still have a ton of work off the ice to do before we are set, but we believe our on-ice project will surprise the area junior hockey fans as we are much younger this season than in other years.” Mr. Blake added, “our scouting staff has done a tremendous job in providing our coaching staff with many difficult player decisions during training camp—we look bigger and faster than last season and we are all looking forward to getting started.”

One of those players is Nevada Waindubence of the Sheguiandah First Nation.

A promising player who has his beginnings with the Little Current Flyers, mother Carrie Waindubence explained that the family was told that Nevada would have to leave the Island if he wanted to advance in hockey. The young man made the move to Sudbury, and most recently spent the last two seasons playing AAA midget hockey for the Nickel City Sons.

Ms. Waindubence said when they read in the paper that Espanola was officially getting a Junior A team, they knew Nevada had to try out, and lucky for him he did as the 6’2” 17-year-old made the team as a forward, a new position for him as he has spent his hockey career as a defenceman.

So far the season has started off well for Nevada too, as he got an assist in the Rivermen’s first game last weekend.

Ms. Waindubence noted the strong support Nevada has from his grandparents, Gordon and Pearl Waindubence, who are his biggest fans.

“We have a long row to hoe,” said Club President/Director of Operations Tim Clayden. “The run for the roses this spring is a long way away just yet, but it does look like our group has somehow managed to at least pull it together enough to ice a competitive team. We like our make up this season; we have seemingly surrounded our organization once again with young men of very good character. It won’t be easy with a 56 game regular season, but with any luck at all we will be competitive most nights and once again we hope to move a number of our young men off to the NCAA, CIS, OHL and other higher levels of play next spring.” Mr. Clayden added. “Coach McCarthy has more tools to work with this year than ever before and there’s a feeling that his comrade ‘Red McCarthy’ has left some magic in the rink here in Espanola to share. Ring the bell, were ready to get started.” (The late Red McCarthy was Espanola’s long-time recreation director and he is credited with developing the game of ringette and in initiating the Espanola Little Theatre more than a half-century ago.)

SUDBURY–It was a night to remember for the Espanola Rivermen Saturday as they skated to their first-ever Northern Ontario Junior Hockey League victory with a 3-1 triumph over the Abitibi Eskimos at Jus Jordan Arena in Iroquois Falls.

Also in the NOJHL on this night the Blind River Beavers claimed their first win of the young season defeating the Elliot Lake Bobcats 3-2 while the Kirkland Lake Gold Miners stormed back from a three-goal deficit to defeat the visiting Sudbury Nickel Barons 4-3.

ESPANOLA RIVERMEN 3 ABITIBI ESKIMOS 1: Espanola jumped out to a 3-0 lead this one and never trailed en route to the Rivermen’s first-ever triumph.

Steven Savage connected on the power play for the visitors 12:45 into the first period with the only goal of the opening session.

Espanola extended their cushion to 3-0 after 40 minutes courtesy of markers from Corbin Bean, who was credited with the eventual game-winner, and Robert Smythe.

In the final frame Aaron Kerr notched a man advantage marker with 5:15 remaining to dash Rivermen goaltender Griffin Strain’s shutout bid and get Abitibi on the board.

That’s as close as the Eski’s would get however as time ran out.

Strain stopped 25 of 26 to register the inaugural win for Espanola. Sylvain Miron faced 31 shots in a losing cause for the home side. 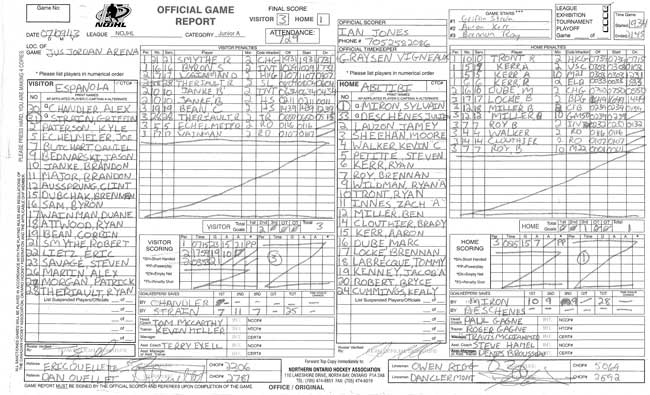