EVANSVILLE – While she didn’t finish in the top three as far as the judges were concerned, Evansville singing sensation Ellie Maxwell did place third in the popular vote (viewer’s choice) category in the Canadian National Exhibition (CNE’s) Junior Rising Star age 12 finals competition.

“No, unfortunately Ellie didn’t win (not having placed in the judges’ top three prize list),” said Mary Mendes de Franca of her daughter, this past Monday. She quipped, “I think we as her parents were more disappointed than she is.”

“However, Ellie did finish third in the popular vote (viewer’s choice category in her age division),” Ms. Mendes de Franca continued. “And she was very encouraged by all the encouraging remarks she received. It was fantastic. It was still quite an accomplishment for her to make it to the finals.”

This is the second year in a row Ellie has competed and made it to the finals in this competition.

Ellie has steadily gained prominence as a skillful singer both on and off-Island in recent years, having performed at venues including festivals and celebrations, concerts and on the CTV Lions Children’s Christmas Telethon last December.

Last year, she was named as one of the 12 finalists of the CNE competition and the organizers personally invited her to return for this summer’s virtual edition.

Given the virtual format, Ellie had to pre-record the performance.

Ellie’s older brother Robert shot the video on a phone; all submissions had to be one continuous take. She performed to a backing track in her family’s front yard.

Ellie will now focus on the next upcoming contest she will be participating in, the Long and McQuade Singing Contest of Toronto. “This contest will also take place virtually,” said Ms. Mendes de Franca. “We were going to travel down to Toronto for this contest, but since they decided to make it a virtual event, all the performers’ auditions will be done virtually. They’re recording each contestant and Ellie will audition at a specific date and time (to be determined).”

From there, Ellie will be taking part in the annual MCTV Christmas Telethon, which appears to be a go again this year. “They haven’t worked out all the details but the telethon will be going on and Ellie will be auditioning for that event.”

“Ellie is also very excited to be going back to school,” said her mother. “She has been homeschooled for the past four years and is looking forward to reconnecting with her peers,” said Ms. Mendes de Franca.

“What’s remarkable is that for a 12-year-old she was not discouraged about not winning the contest. All she said was that it was going to make her work harder,” added Ms. Medes de Franca. 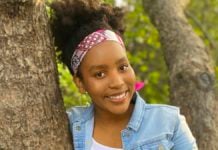