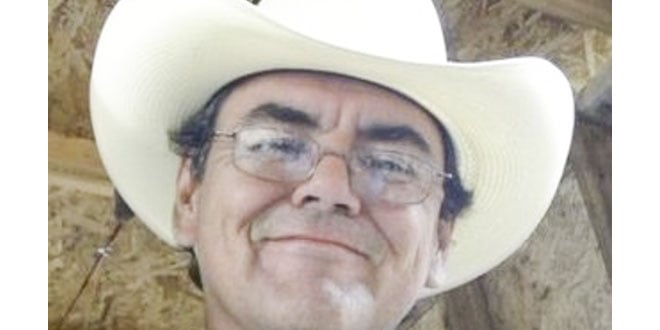 MANITOULIN—The Creator isn’t through with Wikwemikong’s Chris Pheasant yet; there is still plenty of work to be done.

It hasn’t been a secret that Chris Pheasant, Wikwemikong’s, and Manitoulin’s favourite quick witted powwow emcee, has been living with health problems for a number of years and when things took a turn for the worse late last year and into 2014, Mr. Pheasant was in the hearts and minds of many.

He readily admits that he almost died four times, but something greater is keeping him here.

The Expositor spoke with Mr. Pheasant from his hospital room at University Hospital in London on Saturday afternoon, just a short time after he received a liver transplant. He is hard to hear for it is a strain for Mr. Pheasant to speak and he is very weak but he does so anyway, eager to talk to this reporter and, of course, to crack off a few jokes too.

“How’s your dad?” he whispers at the start of our conversation, ever mindful of everyone else, even in sickness.

Mr. Pheasant admits to feeling much better than he had been. “It’s a miracle,” he says. “I’m truly blessed. The prayers from church, from my people right across Canada and the United States, putting tobacco down for me—I was blessed by the Creator.”

Mr. Pheasant is a very popular man, which was evident last Thursday night at the Manitoulin Hotel and Conference Centre where a fundraiser was held for he and his family to help cover some of the costs associated with receiving medical attention away from home.

The sold-out comedy show and dinner—a fitting tribute for a man who loves to laugh and to make others laugh too—saw friends attend from across Manitoulin, from Wikwemikong to Sheshegwaning and to places beyond. Grand Council Chief Patrick Madahbee and Deputy Grand Chief Glen Hare were there, as was Chief Patsy Corbiere of Aundeck Omni Kaning, Chief Joe Endanawas of Sheshegwaning and Chief Steve Miller of Atikameksheng, all of them keen to support the event too. And even the Chippewas of Rama, when they learned of the fundraiser, purchased a table so members of Mr. Pheasant’s family could attend, as did the Wahnapitae First Nation.

“The people, especially on Manitoulin, they’re so kind, so generous,” Mr. Pheasant said of the evening of comedy in his honour. “I just want to thank all those people.”

When well-known First Nations comedian Ryan McMahon learned of Mr. Pheasant’s situation, he contacted Wikwemikong Chief Duke Peltier and said he wanted to help. He would be touring Ontario, and if the community arranged a show he would gladly come and perform for his friend Chris. Mr. McMahon co-emceed the Wikwemikong Cultural festival powwow with Mr. Pheasant last year.

Chief Peltier and his wife Nicole got busy arranging the event and sending out letters to all of the communities, province-wide, where Mr. Pheasant has helped to bring their powwows back to life. The chief said the response was overwhelming.

Chief Peltier says he was pleased to report that the fundraiser raised $3,500 for the Pheasant family.

“It wasn’t hard to convince people to support the event,” he says.

In a touching moment at the event Mr. Pheasant was patched into the conference room via FaceTime from his hospital room in London, first on a laptop that was passed around the room with people waving and calling out encouragements then via projector screen so the whole room could see him. In true ‘Pleasant Pheasant’ style, he had the audience laughing in no time.

Nicole Peltier and Mr. Pheasant’s son Launie then presented Mr. McMahon with a star blanket quilt made by Wikwemikong’s Debbie Fox, which was wrapped around the comedian in a gesture of thanks. Mr. McMahon noted to the 200 plus members of the audience that if anyone else were in the same situation, Mr. Pheasant would be one of the first ones to volunteer his help.

“It was very emotional,” the chief shares. “We went through an evening of laughter, followed by the opposite end of the roller coaster, tears.”

“He hasn’t lost his wit—he was good with the one liners,” Chief Peltier adds.

The chief says that Mr. Pheasant is incredibly important to the community as he has always been a strong advocate of the return of First Nations culture in every day life.

“He’s been instrumental in helping to reestablish a lot of cultural events across the province by being their emcee and making sure the events are being run in a good and kind way,” he continues.

He thanked all those who supported the event saying, “It’s very good to see all our members of the Anishinaabek Nation pull together during these times.”

When asked, Mr. Pheasant said he wasn’t aware of the many lives that he’s touched. “I was raised the right way, to be kind, generous and respectful,” he whispers.

He says he didn’t know, and wouldn’t have wanted to know, about the fundraising efforts being planned for he and his wife Joanna and their family. “I have a hard time receiving,” he says. “I like to give.”

“I talked to the Creator and he told me ‘relax, be respectful and accept these things,’ starting with the liver that’s been given to me.”

Mr. Pheasant says he thinks about the person who passed away and who gave him the gift of life through the new liver. “I almost passed away a couple of times,” he admits. “It’s hard to share that but I know the community of Manitoulin and the North Shore were so very kind, helping me out, and things started to turn around.”

Mr. Pheasant says the doctors have given him a three-week timeframe before he can return to the North.

“In three weeks, I’ll be home to Manitoulin—I miss it,” he says. “I miss the beautiful land.”

Mr. Pheasant believes he was given another chance at this life to finish what he started—the education of both Native and non-Native people about the Anishinaabek and “who we are as first descendants.”

“We are a nation,” he shares. “We still have our own language, we still have the land, we still have an economy and the Creator, or God as some would say—that’s what I call nationhood. A lot of people, including our own, forget these things.”

Mr. Pheasant thanked the Creator, his wife Joanna, his sisters, sisters-in-law, aunties, Shirley Williams, Roseanne Kinoshameg and especially his son Launie and his partner Courtney and his granddaughter Amberlynn for their support through this tough time. He also thanks Ogiima Peltier and his wife Nicole for their hard work on the fundraiser.

“Our people, the Anishinaabek, are very, very kind to my family and I’m very fortunate,” he adds.

Mr. Pheasant says when he returns home he’ll still need to rest and that most people probably won’t recognize him. “I look 24,” he laughs.

“You’re a fighter,” this reporter says.

“I’m a better lover,” he quips back with a chuckle.