MANITOULIN— With the recent news of Loblaws stores in Sudbury no longer carrying locally-produced Beatrice milk from Sudbury’s one remaining dairy, Parmalat Dairy, and the subsequent loss of 13 jobs from this Sudbury milk factory, The Expositor sought to find the fate of the future of Farquhar’s milk in Manitoulin and area Loblaws stores. So far, that future looks secure.

“I hope not,” was Farquhar’s Dairy president Don Farquhar’s response when asked if Farquhar’s could be facing a similar fate as its Beatrice neighbours in Sudbury, “We expect to remain in stores that we’re currently in.”

“It’s a little bit tricky for us as we actually do all the shipping for Nielsen’s,” he added. Saputo-owned Nielsen’s is the milk that will be completely taking over Sudbury Loblaws store shelves. Mr. Farquhar explained that his product has “less carry” in Sudbury chain stores, but is carried in smaller convenience-style stores in the city instead. The Sudbury stores affected will be the Your Independent Grocer stores, Super Store, Fresh Mart, Valu Mart and No Frills grocery stores.

While he has not spoken with Loblaws directly, Mr. Farquhar said he has been involved in store-level talks. “We’ve had some assurances that our products will continue to be sold,” he said.

While he said he felt badly for the Sudbury plant and its workers, “being the only local dairy in Northern Ontario might give us a little more visibility,” he added.

So what does this mean for Sudbury East producers as their milk will no longer be needed in the same quantities at the Sudbury Beatrice plant.

The reality of milk processing in Ontario has been that milk in this area of the province has been coming from as far north as Thunder Bay while some Northern milk is shipped to southern Ontario, explained chairman of the Manitoulin North Shore Dairy Producers Keith Emiry. “There has been a lot of transportation of milk across the province for some time,” he said.

Mr. Emiry explained that there is also an agreement with the five eastern provinces, including Ontario, to ship milk across borders.

“We often have milk coming from Quebec to Ontario—it’s a constant balancing act of where milk is needed,” he said, giving the example of an increased demand for milk in Prince Edward Island in the summer months due to a high volume of ice cream production.

“All of the transportation costs are shared (inter-provincially), or shared within the province,” Mr. Emiry added. “The cost is fairly significant.”

“We’re in the fortunate position that we’re able to tell people that if you’re drinking Farquhar’s milk, you’re drinking milk from my farm,” he added. “We are lucky that Farquhar’s processes our milk every week,” noting that only the odd time the milk travels further afield than its catchment area.

The Expositor spoke with one Manitoulin Loblaws franchise owner, who redirected this reporter to Loblaws’ public relations department. As of press time Monday, Loblaws had yet to respond to the paper’s queries as to the security of Farquhar’s milk in Manitoulin stores. 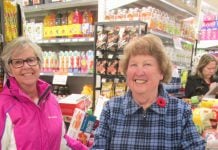 Add “fight cancer” to your grocery list this April