MANITOULIN—Expositor duo Dave Patterson and Alicia McCutcheon have launched a morning talk show, which will air Thursday mornings at 10 am and discuss Expositor news, Island events and more.

The inaugural Expositor Live was held March 17 to good reviews.

“Apparently we have a good dynamic,” Ms. McCutcheon, Expositor publisher, laughed. “I don’t know how I let him talk me into these things.”

Mr. Patterson, The Expositor’s production manager, said he thought the idea of a morning show would resonate with the people of Manitoulin who have a deep connection with their newspaper. “This is another way to connect with The Expositor and for those who may be new to the Island, to get a sense of their community paper,” he added.

Mr. Patterson and Ms. McCutcheon will discuss that week’s newspaper and topics close to Islanders, highlight events and even have special guests. It will also feature ‘good banter’ between the hosts.

Starting this week, the pair will also be doing giveaways based on trivia from that week’s Expositor, “so be sure to pick up a copy, either in print or digitally,” Mr. Patterson advised.

“We’re excited to announce that beginning this week, Jeff King of Island Time Boat Rentals will be sponsoring a free paddleboard rental for one lucky viewer each week based on our skill-testing Expositor question,” Mr. Patterson shared.

During the St. Patrick’s Day broadcast, Ms. McCutcheon called Lion President Bruce Burnett, of the Little Current Lions Club, to put him on the spot about Haweater Weekend, as the club had yet to announce its plans on the festival. Lion Bruce announced on the air that barring any government restrictions at that time, Haweater Weekend is a go for July 29-July 31.

“We hope it’s a hit and that it allows us to further engage with our community,” Ms. McCutcheon said.

With over 6,000 views of the March 17 broadcast as of press time Monday, we think it might work out just fine.

Tune in to Expositor Live on this newspaper’s Facebook page Thursday mornings at 10 am. 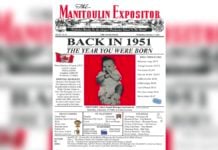 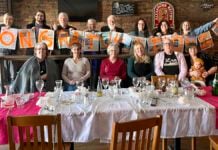 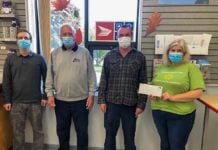 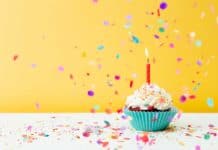 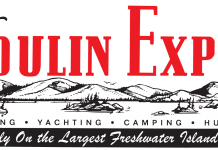 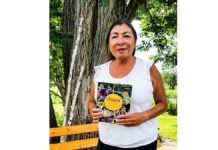 ‘Powwow: A Celebration through Song and Dance’ book signing at The Expositor on Thursday, August 27