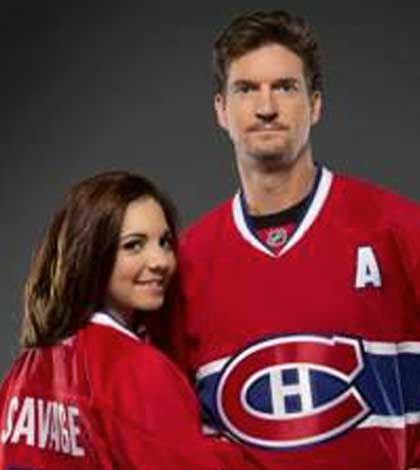 ETOBICOKE—CBC Television’s hit show Battle of the Blades (BOTB) is back for a fourth season beginning this Sunday, September 29 and proud parents John and Sharon Savage of Bay Estates will be cheering on their son and BOTB star Brian Savage at the MasterCard Centre in Etobicoke, his first ever debut in figure skates, along with partner Jessica Dube.

John Savage said he and his wife Sharon were glued to the screen on Sunday for the two hour season premiere of the show, which introduced the competitors and took a look back at the first three seasons. He said the Savages are quite familiar with the show, having watched the other seasons as the family has history with both hockey, of course, and also with figure skating (Sharon was once a coach).

Son Brian Savage was chosen to play for Team Canada during the 1994 Winter Olympics, where he won Silver in the final game against Sweden, his bio reads on the Team Savage Dube Facebook page. After the Olympics, Brian began to build his career playing for the Fredericton Canadiens before joining the NHL’s Montreal Canadiens. Due to his exceptional talents, it wasn’t long until he started setting multiple game records. In October 1996, he achieved the first hat trick for the Habs at their new ice palace, the Bell Centre, following their move from the storied Forum during a game against the New York Islanders in 1999, became the first Canadien (since Joe Malone in 1917) to score six points in a road game.

Following his stint with the Canadiens, Brian was traded to the Phoenix Coyotes in January 2002 and later played with the St. Louis Blues before completing his career in 2006 with the Philadelphia Flyers. Along with his NHL achievements, Brian has worn and represented Team Canada’s jersey four times throughout his career and was a member of Canada’s World Championship teams in 1993 and 1999. He, his wife and three boys live in Phoenix today.

Brian spoke with The Expositor in a telephone interview Monday and when asked if he has a newfound respect for figure skating, Brian chuckled, “I definitely do—it’s a lot harder than I anticipated.” 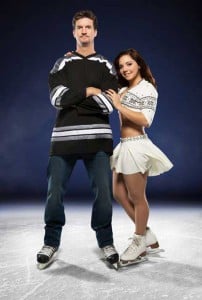 “I have an amazing partner in Jessica Dube,” he shared. “Both of us have had some interesting things happen to us in our careers that we managed to overcome.” Brian suffered a fractured disc in his neck after a shattering hit in 1999 while playing for Montreal which could have seen him paralyzed, while Ms. Dube suffered a serious facial injury during the Four Continents Championships in 2007. While competing, her partner’s blade accidentally sliced Ms. Dube’s face during side-by-side camel spins leaving her with 83 stitches on her left cheek and nose. After a month’s recovery, the pair returned to the ice and finished in seventh place for the second time at the World Championships.

“We’ve been told this is the best crop of guys they’ve had,” he said, noting that as the Winter Olympics in Sochi, Russia is fast approaching, the producers were looking for players who have played on an Olympic team, which Brian did in 1994.

This Sunday is the first live show, which will see Team Savage/Dube perform a two minute routine. Brian said viewers could look forward to two lifts and “a pretty cool spin.”

The audience can also expect a rocking dance from the duo, as rock and roll is the first theme of the show. Coincidentally, Brian just so happens to have 1980s glam rock star Bret Michaels of Poison fame (and currently reality television fame) as his neighbour and asked his friend for a favour in the use of one of his songs for opening night. Mr. Michaels gladly agreed, and his been helping to tout the pair through social media. As for what song it will be, you’ll have to tune in to find out, Brian said.

This is the pair’s third week in Toronto and they have been training for three hours each day with weekends off, but that ends as of now. From here on in, it’s seven days a week.

Brian explained that he first turned down the gig because of the time commitment, especially as his family is in Arizona, but the thought of winning $100,000 for his brother Dave’s and sister-in-law Kim’s charitable organization, Megan’s Wings, was just too much to pass up.

Megan Savage was the niece of Brian and granddaughter to John and Sharon. Megan passed away on April 2, 2003, succumbing to leukemia after a two-and-a-half year battle. In 2005, after seeing the number of families that had no financial support when battling cancer, the family set up Megan’s Wings with the mission statement to improve the care and quality of life for children with cancer and provide needed financial support to the families. There are chapters of Megan’s Wings both in Ontario and in the United States. 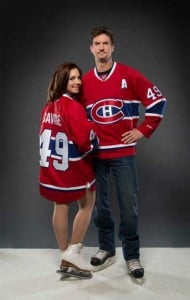 Brian raises money in memory of his niece in any way he can, even completing a marathon in 2005 with wife Deb which raised $35,000.

“I have a friend who’s going through this right now,” Brian said. “His daughter Isabella was just diagnosed six weeks ago and Jess and I visited her in the hospital just the other day.”

At the height of Ms. Dube’s career, she and her partner Bryce Davison gained tremendous international success with a World bronze medal, two World Junior silver medals, a sixth place finish in their second consecutive trip to the Olympics in 2010 and numerous Grand Prix medals to their credit, her online bio reads. The 2007/2008 season would give them their best international results with medals at their Grand Prix events and a bronze at the 2008 World Figure Skating Championships. In addition to pairs, Ms. Dube also competed during this time as a singles skater, finishing in sixth place at the National championships in 2008 and 2011. Later that spring, Ms. Dube was paired with new partner, Sébastien Wolfe, and together they placed in two Grand Prix events and won Silver at the 2012 Canadian Pairs Championships.

“I can almost say that he’s more excited about this than he ever was with hockey,” dad John Savage told The Expositor. John also noted that he and Sharon have been asked for musical suggestions that Brian and Jessica can consider for their dances, “so we’re sort of involved too.”

Brian has been taking his new role very seriously, and once it was confirmed that he would have a role on the hit show, the former NHL star traded in his hockey skates for figure skates and began to train in earnest. A short video online has Brian practicing his crosscuts with young figure skaters in Sudbury over the summer led by coach Wendy Philion. While in Phoenix, Brian hooked up with Doug Ladret, a former Canadian championship pairs skater who is now the head coach at the local rink where Brian’s sons play hockey, for some one-on-one coaching beginning the day after Labour Day.

Brian urges his Manitoulin fans to cheer he and Ms. Dube on and asks that Islanders like their Facebook page (Team Savage-Dube for Battle of the Blades) and vote for he and his partner on cbc.ca/battle. The other contenders include Anson Carter and Shae-Lynn Bourne, Mathieu Dandenault and Marie-France Dubreuil, Michael Krushelnysk and Marcy Hinzmann, Vladimir Malakhov and Oksana Kazakova, Grant Marshall and Sinead Kerr, Jason Strudwick and Violetta Afanasieva and Scott Thornton and Amanda Evora.

“I’m on Manitoulin for two weeks out of the summer,” he said, noting his favourite salmon fishing haunts are in Meldrum Bay and South Bay, and giving props to Manitowaning Bay.

Team Savage-Dube was going to grab a quick coffee from Tim Horton’s before hitting the ice again on Monday night. “We got the late shift tonight,” he said before bidding The Expositor adieu.