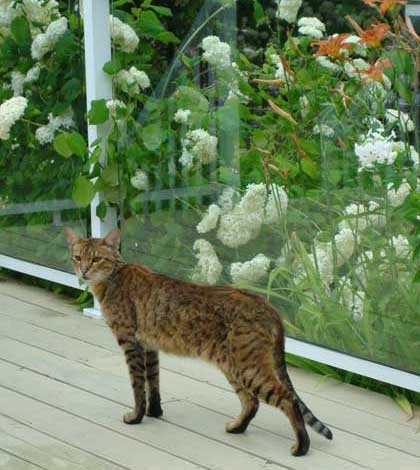 BAY ESTATES—On Monday, July 29, The Expositor’s phones lit up with the sighting of a large feline in Bay Estates. Neighbours within the same area of the Bay Estates subdivision all reported seeing a larger-than-average house cat with distinct markings that had them all on edge.

Chris Brownlee, a seasonal resident, was one of the people who called this newspaper, saying she had photos of a possible young cougar which was spotted napping, grooming and just generally hanging out on her back deck. Whenever Ms. Brownlee tried to get a closer look, the cat would take off running, apparently frightened of humans. A phone call to the Ministry of Natural Resources (MNR) in Sudbury by Ms. Brownlee and an explanation of the creature suggested to the MNR spokesperson that this could be a young cougar. Recalling that The Expositor has a reward for a legitimate cougar sighting on Manitoulin, Ms. Brownlee was prompted to phone in and bring her camera to the Little Current office.

While Ms. Brownlee was making the trip in to Little Current, another Bay Estates resident, Stewart McBane, called this reporter. He too had seen the cat, but said he guessed it was a Savannah cat—an exotic pet comprised of part African serval cat and domestic feline, one recognized by the International Cat Association as a registered breed.

At the same time, the MNR was contacted by The Expositor, letting its media spokesperson Jolanta Kowalski know that an email complete with photos of a possible cougar would be sent to her shortly and to please have her cat experts on standby. This was, after all, Expositor production day. Could we finally have our cougar?

Ms. Brownlee and her husband showed up in good time, the photos removed and there—oh the anticipation—was indeed an exotic kitty cat. A Google images search revealed that Mr. McBane was probably right. Someone in Bay Estates is the proud owner of a Savannah.

Another Google search for ‘Savannah catteries’ revealed an Ontario breeder called Sunset Servals. After sending an email with the photos and an appeal for help, a gentleman by the name of Marc emailed back with the news. “Yes, that is a Savannah cat, a very late generation one at that,” Marc writes. “Possibly very low quality F4, but I am leaning towards F5-F6. It is 90 percent house cat, maybe more, so not very close to the wild at all. It could possibly be a late generation Bengal (another exotic breed of cat) as well, but I am leaning towards Savannah because it looks like it has spots and is not very stocky.” A little Internet research shows that Savannah’s are rated between F1 and F7, F1 being more serval than domestic and F7 the opposite.

As for the email to the MNR, experts didn’t bother with a response. Exotic pussycats on the loose are not on their list of priorities, taxpayers can be sure.

While Ms. Brownlee was relieved, and maybe a little disappointed, that her find was not a cougar, this story is a good reminder of The Expositor’s years-long contest for photographic proof of cougars on Manitoulin. If a photo of a possible cougar is taken, it should be emailed to editor@manitoulin.ca where it will be sent for analysis by our experts at the Ontario Puma Foundation, as well as the Ministry of Natural Resources, not to mention by our own Dave Patterson, who’s an expert in checking for any funny business with altered photos. If the feline is identified as a cougar, and the location on Manitoulin is verified, a reward of $500 will then be given to that lucky photog. In fact, The Expositor is in the process of checking a photo sent to us on Monday of a large cat captured on a Mills area game camera, so stay tuned to future editions of this newspaper to find out what the outcome will be.