TIMMINS — The father and son team of Steve and Rhyis Arthurs of Little Current came back from the Great Canadian Kayak Challenge Festival in Timmins a happy pair, having placed high in the standings in the prestigious event.

Mr. Arthurs raced in the 16K elite division, finishing fourth with a time of just over one hour and 34 seconds—a personal best—and raced again just a short time later in the 6.5K open, placing fifth.

Eight-year-old Rhyis began training with his father late this spring, paddling three kilometres twice a week, and all that hard work has paid off. In the 3K youth race (ages eight to 13), his first ever race, the youngster placed third. Rhyis didn’t realize he had medalled at first, but when his dad told him the good news his face lit up, Mr. Arthurs shared.

“The only ones to beat him were teenagers,” his proud dad beamed.

Rhyis had watched his dad race in Timmins the year before and announced his intentions to follow suit shortly thereafter. 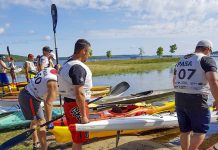 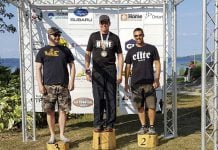