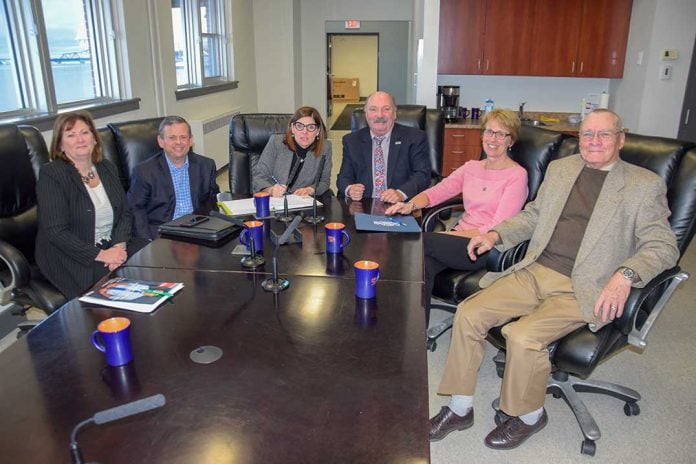 LITTLE CURRENT—Meetings with federal ministers normally take weeks, months or even years to set up, but thanks to a sharp eye and a quick note sent by incoming Northeast Town councillor Barbara Baker, Canadian Minister of Seniors, the Honourable Filomena Tassi (Hamilton West-Ancaster-Dundas) stopped overnight on her cross country tour at the Manitoulin Hotel and Conference Centre and met with a small group of seniors advocates in an early morning meeting before touring Manitoulin Centennial Manor.

“I have to admit it was a bit of a surprise,” said Ms. Baker of the quick turnaround for the meeting. “I saw an article in Zoomer Magazine last month about the new seniors’ minister and how her mandate was to travel across the country to identify seniors’ issues and to collect feedback on how to make government programs more effective in serving the needs of seniors. I thought to myself ‘why not send an email?’ I explained how Manitoulin has a large senior population and that we serve seven First Nations and that there is lots of impact—and it worked.”

A couple of days later there was a call on Ms. Baker’s cellphone while she was teaching a class. “I don’t normally get calls on my cell while I am teaching,” she laughed, “so I just turned it off and ignored it.” When she got home her husband asked her if Minister Tassi’s office had gotten a hold of her. Five days later the meeting took place at 7:30 am at the Northeast Town’s Artisan Incubation Centre/Council Chambers.

Ms. Baker said that she sought the assistance of Northeast Town CAO Dave Williamson to set up the meeting with a small group of local seniors’ service deliverers.

Attending the early morning meeting were Mayor Al MacNevin, Fern Dominelli (CAO of the Manitoulin Sudbury District Services Board), Wendy Gauthier (provincial appointee to the Manor board), Paul Moffatt (mayor of Assiginack and Manor board chair) and Ms. Baker (Northeast Town councillor elect and a local entrepreneur who teaches classes to seniors).

The group discussed affordable housing for seniors, financial support for long term care homes, affordable internet access for seniors living in their homes, along with a wide variety of other topics specifically dealing with the needs of seniors in rural and small Northern communities.

“The seniors file, more than any other file, requires the collaboration of many partners and levels of government, and I am always inspired to learn from people that work so hard for, and with, our seniors,” said Minister Tassi in opening the meeting.

Mayor MacNevin thanked the minister for attending the meeting and for showing a legitimate interest in learning about seniors’ issues in Northern Ontario.  “Northeastern Manitoulin and the Islands prides itself on being a Senior Friendly Community,” he said. “We are constantly looking for opportunities to improve the lives of seniors in our community and it has been great to have the opportunity to share our ideas with you.”

Asked about how she felt the morning meeting had gone, Minister Tassi didn’t hesitate. “Absolutely fantastic,” she said. While many of the concerns highlighted during the meeting mirrored those heard in other jurisdictions, Minister Tassi said that there were new perspectives to be found during the Island meeting.

“I learned new things today, for which I am very grateful,” she said. “Some of the same issues came up, income security, affordable housing, those issues I have heard in the past. But I appreciate this morning the focus on elder fraud and elder abuse—some of the challenges and especially some potential ideas, for example powers of attorney, that there are two appointed and both have to sign, those sort of things. I think elder abuse and elder fraud is something that we need to speak more about and I think for some it will be something that is hard to talk about because it is an admission that you have been had, but we need to break down those barriers. Scammers are getting better and better at scamming. To be able to have this open conversation and to realize what is actually happening out there.”

Although the Manor falls under provincial jurisdiction, the minister noted that the issues facing seniors and the elderly call for a collaborative effort from all levels of government.

Ms. Baker had focussed her efforts on the issues of elder fraud and elder abuse, something she noted she has come across as she teaches classes to the elderly. She also brought up the value of the New Horizons and Trillium programs that fund many of those courses.

“You know when it is a child that is being abused we have all sorts of agencies and personnel who are expected to report it, and there are agencies that look into those reports,” said Ms. Baker. “But when it is an elder who is being abused, the complaint has to come from that elder. If it were to operate a little bit more like it does with a child I think it could be made better.” Ms. Baker also noted the challenges presented in accessing services in a rural area with poor cell coverage.

For his part, Mr. Dominelli focussed on the issues of the need for more seniors’ housing and the ability to stay in one’s home and supports for assisted living and palliative care. Focussing on the National Housing Strategy, Mr. Dominelli noted that there is so far only one applicant to the program in the DSB catchment. He also highlighted the success that the rural regions have been having with the portable housing benefit but pointed out that the $200 offered in the new provincial-federal guidelines falls far short of what is needed. Mr. Dominelli admitted the turnaround was uncharacteristically short for the meeting with the minister. “But it was very nice to see her and I think (it was) a very productive meeting,” he said.

Throughout the meeting with the seniors’ advocates, Minister Tassi appeared attentive and open, listening intently before asking a question to delve deeper into the issues presented.

“I was quite impressed with her actually,” said Mayor MacNevin. “The early morning hour didn’t seem to faze her a bit.”

Born and raised in Hamilton, Minister Tassi served as Catholic School Trustee and ran for the provincial Liberals in 1995. She obtained her Bachelor of Laws from the University of Western Ontario in 1986. She and completed her Masters of Religious Education at the University of St. Michael’s College, University of Toronto, in 2004. She practiced law for six years before taking some time to raise her children. Minister Tassi later became a high school chaplain for the Hamilton-Wentworth Catholic District School Board where she helped establish the DREAMS (Dominican Republic Education and Medical Support) program which has enabled thousands of students to travel to live and work with the materially poor in the Dominican Republic. She led many fundraising initiatives to pay for the building of hundreds of homes in the region of San José de Ocoa, Dominican Republic. Minister Tassi also co-founded CLIP (Catholic Leadership Interdisciplinary Program) which is a full semester, experiential learning program, currently offered by the Hamilton Wentworth Catholic District School Board.

Minister Tassi is the recipient of the Philosophy Award, University of Waterloo (1983), Hamilton Catholic Director’s Award of Excellence (2002), Brian Halferty Chaplaincy Award (2010) and the Fr. Norm Choate Distinguished Graduate Award (2010). She has co-authored three books: ‘500,’ ‘Greatness In Our Teenagers’ and ‘365 Prayers.’