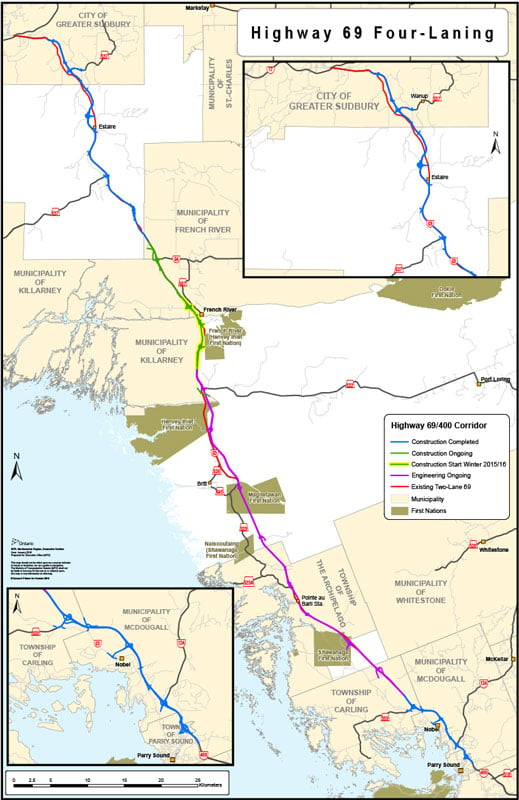 SUDBURY – There will soon be more four lane sections of the highway leading North from Toronto following a May 21 federal announcement of a $169.2 million investment in improvements to Highway 69.

“It’s just going to make it so much safer,” said Killarney Mayor Ginny Rook when contacted by The Expositor following the announcement. “I don’t know how many times I have been doing the speed limit on the two lane portion of the highway when someone would go speeding past me on a double line section. It also make it easier for tourists to get up here from down south and that will be good for our businesses here in the North.”

The first project involves twinning and realigning an 11 kilometre stretch of road from north of Highway 559 to just south of Shebeshekong Road. Work also involves constructing a new interchange at Woods Road, building new service roads to improve access for local drivers, and installing 14 culverts and 22 kilometres of fencing to protect wildlife.

The second project involves expanding a 19.3 km section of the highway to a four-lane, divided highway, including new twin bridges over Still River, Key River and Straight Lake. The project work also includes building new interchanges at Bekanon Road and at Highway 522.

These upgrades will improve safety and efficiency along this key route, boost trade and support economic prosperity for the region by accommodating a greater number of commercial and passenger vehicles, notes a release.

“These vital improvements to Highway 69 will make it easier for businesses to get their products to customers, reduce pollution and allow local residents to spend less time in traffic and more time with their families,” said Mr. Serré. “Projects like this improve the daily lives of Northern Ontarians now and lay the foundation for a bright and prosperous future.”

“Now more than ever, communities need help meeting the long-term infrastructure needs of residents,” said Mr. Lefebvre. “Our government is making historic investments in roads, bridges, public transit and safe water across Northern Ontario and I am pleased we are able to work our partners to continue these investments.”

“I would like to thank the Government of Canada for its investment in the Highway 69/400 project and to MP Serré and MP Lefebvre for their advocacy on this file,” said Sudbury Mayor Brian Bigger. “Residents of Greater Sudbury and all of Northern Ontario know how critical this highway is for trade and transportation safely to and from our region and are eager to see its completion.” 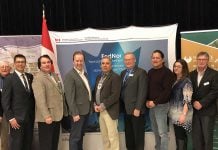