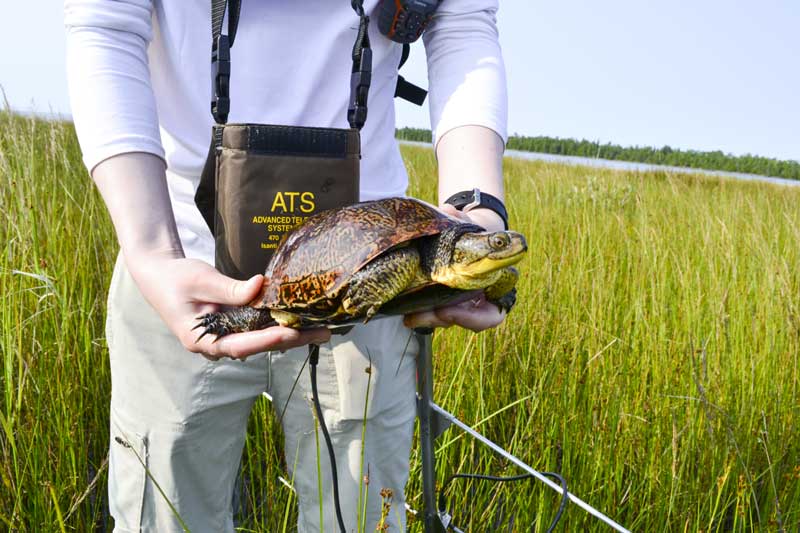 MISERY BAY—Laurentian University researchers investigating the mysterious deaths of over 71 turtles at Misery Bay Provincial Park in Western Manitoulin have extended their field study over the winter to further explore theories of predation and hibernation.

“I stopped living on Manitoulin back in September, but travelled back a couple days each month in the fall to track the turtles,” explained Donnell Gasbarrini, a Laurentian University Masters of Science student working on her masters under Dr. Jacqueline Litzgus, a professor and herpetologist in the Department of Biology at the university. “We were able to find their hibernation spots, which was really neat. Blanding’s turtles hibernate at the same site each year, so we were able to identify a few of their sites. What was very interesting is that none of the turtles we were tracking hibernated where the majority of the dead turtles were found.”

Ms. Gasbarrini lived near Misery Bay from May to September 2014, conducting daily monitoring of the Blanding’s turtles as part of an $80,000 (over two years) grant to the Friends of Misery Bay (FOMB), in conjunction with Laurentian University, from the Ministry of Natural Resources and Forestry’s (MNRF) Species at Risk Stewardship Fund.

Using radio trackers, Ms. Gasbarrini and her field assistant Amber Koldzik monitored a total of 18 Blanding’s turtles in the park, in addition to using turtle decoys and field cameras to monitor potential predators.

The park ecologists contacted Dr. Litzgus, who worked with Andrea Mendler, a fourth-year Laurentian forensic studies student, to try and determine the cause of the turtle population decline.

Ms. Mendler presented her thesis at the end of their study this spring titled ‘The Murder Mystery at Misery Bay,’ which looked at several different theories but presented inconclusive results.

Ms. Gasbarrini explained that originally they were only planning on conducting field research throughout the spring/summer and less frequently in the fall, but that in order to test their theories they have extended their field research into the winter.

“I have been organizing the data collected in the spring/summer 2014, but I haven’t done too many comparisons yet,” continued Ms. Gasbarrini. “But some of our research has led to other ideas such as placing bricks with temperature data logs throughout the wetlands at Misery Bay. We want to see if areas have similar wetland characteristics.”

“There are three main reasons turtles die in the winter,” further explained Ms. Gasbarrini, “freezing, not getting enough oxygen or predation. Our original plan didn’t involve winter field work but turtles are in a very vulnerable position during hibernation and it is possible that this is when their death occurred.”

The temperature data logs on the bricks, as well as attached to a few of the monitored turtles, record the temperature every three hours.

Ms. Gasbarrini explained that cold temperatures are good for hibernating Blanding’s turtles, but temperatures that dip too low can cause freezing which can damage the turtle’s tissue and lead to death.

“Another factor about the Blanding’s turtle’s Misery Bay habitat is that it is shallow wetland,” said Ms. Gasbarrini. “We learned that it was a low water year (in 2013) and this may have created ice all the way down to where (underwater, in the muddy bottom) the turtles were hibernating. This could have led to tissue freezing or, if there was ice all the way down, the Blanding’s turtles couldn’t get the oxygen they need through the water.”

Throughout the winter Ms. Gasbarrini will be travelling monthly to Misery Bay Provincial Park to look for animal (predator) tracks in the snow around the hibernation sites and check motion-censored cameras.

The Expositor will be learning more about this winter fieldwork in the near future when we visit the site with Ms. Gasbarrini.