SHEGUIANDAH – Firefighters respond to all kinds of emergencies and last week was no exception as members of the Northeast Town Fire Department responded to the playground at the Centennial Museum of Sheguiandah to reports of a child stuck in a swing.

Duane Deschamps, Northeast Town Fire Department fire chief, told The Expositor that crews received a call on Thursday, August 15 at 11:15 am about an eight-year-old girl stuck in a baby swing at the museum park.

Crews responded and found the girl crying and in distress. Mr. Deschamps said the swing appeared to apply more pressure on the legs when the child had tried to wriggle out.

“We had to cut the swing down,” he said.

“She was shaken up and crying but by the end she was happy and got to go continue playing with her friends,” Mr. Deschamps added.

This is not the first time the fire department has been called to rescue a child stuck in a baby swing. Two years ago, crews also removed a boy from a Low Island Park swing in which the swing itself had to be cut to set the child free.

Dave Williamson, Northeast Town CAO, told The Expositor that the incident was reviewed and it was determined that the swing was not defective in any way. “Swings are standardized across the province and are safe for use,” he said.

Both Mr. Williamson and Fire Chief Deschamps urged parents to be ever-vigilant when their children are using playground equipment.

“We do recommend proper adult supervision of children using playground equipment to ensure that the equipment is age and skill appropriate for the child’s use,” Mr. Williamson added. 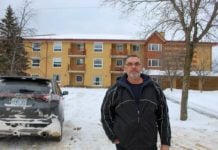