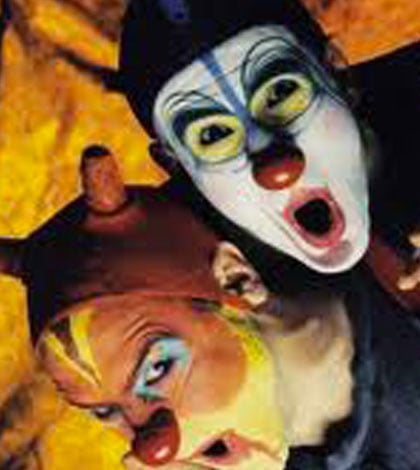 EVANSVILLE—A quiet Saturday morning took a dramatic turn for an Evansville couple when their home was completely destroyed by a fire. John Turner, Julia Winder and their dog escaped unharmed on January 4, but were left standing in the cold with only the clothes on their back, a ukulele and Mr. Turner’s wallet as their beloved home burned to the ground.

“It was Julia that first noticed something was wrong,” said Mr. Turner. “She said that she could smell something and noticed a tiny curl of smoke coming from the panel leading to the attic.”

Mr. Turner, ironically a local volunteer firefighter himself, grabbed a fire extinguisher and a nearby chair and attempted to douse the fire, but the smoke increased and the couple made the wise decision to leave the building. “I grabbed my wallet and my favourite ukulele on my way out the door,” said Mr. Turner.

Unfortunately, Ms. Winder’s drums and the many other musical instruments in the home were not so lucky and were soon lost to the flames.

Mr. Turner’s name might be familiar to the public due to his connection as the founder and operator of the Manitoulin Clown Farm and to the world at large as one half of the internationally renown clown duo Mump and Smoot.

In an anything but comic turn, however, the Mump and Smoot archives, as well as Mr. Turner’s clown costumes and props, were also consumed by the fire. “All the clippings from when we first started were lost,” said Mr. Turner. “The costumes and props built up over the years are gone.” Mr. Turner said that he would just have to recreate the costumes and material, but the upbeat smile on his lips faded from his eyes as he spoke. Some things can never be replaced. “There are a lot of things that had memories attached to them for Julia,” said Mr. Turner. “I think that has been hard for her.”

The couple are staying with friends while they sort out their lives and make arrangements with their insurance company to replace their home, furnishings and clothes.

“People have been amazingly supportive,” said Mr. Turner. “We really can’t get over how supportive they have been.”

When the fire team arrived, Mr. Turner donned his equipment and joined in the battle to contain the fire, but as with many older buildings, once caught the fire could really only be restricted to the main building. “We poured the water to it, but in the end it was gone.”

The cause of the fire is unknown. “We only saw it in the attic, somebody said that it might have worked its way up from below, but we really have no idea,” said Mr. Turner. “The insurance adjuster asked us about mice right away. We had the wood stove inspected and certified recently, all that is in order.”

The barns and outbuildings at the clown farm have not been impacted by the fire, and equipment such as the snowblower are intact, but of the house and its contents little to nothing remains. 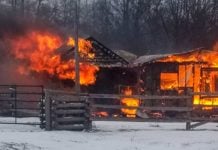 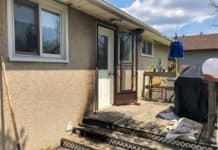 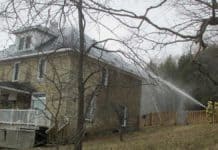 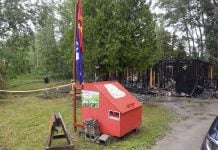