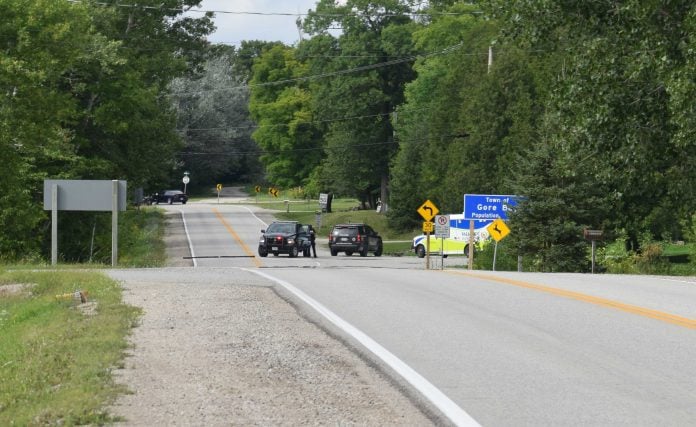 GORE BAY – The court case involving a 43-year-old Gore Bay man who was arrested and charged with several charges including attempt to commit murder with a firearm and possession of a weapon for dangerous purpose, has been set over court to a first appearance date of September 16, 2020.

Darcy Hopkin, age 43 of Gore Bay, was arrested and charged with attempt to commit murder with a firearm; possession of a weapon for a dangerous purpose; careless use of firearm, weapon, prohibited device or ammunition; unauthorized possession of a prohibited or restricted firearm; discharging firearm, recklessness; uttering threats–cause death or bodily harm; and failure to comply with release order–other than to attend court.

As was reported in last week’s edition of the Recorder, Manitoulin residents were startled by the sounds of multiple sirens and dozens of police cruisers with flashing lights hurtling westward toward Gore Bay on the afternoon and evening of Thursday, August 27. The police vehicles were responding to reports of a shot having been fired at one of their colleagues.

An apparent mental health crisis had resulted in a close call for an Island Ontario Provincial Police (OPP) officer when a shot was fired at his cruiser from an upstairs window as he pulled into the driveway of a Wright Street residence in Gore Bay. That single shot from a high-powered rifle mobilized the massive OPP response that included dozens of tactical unit members, the deployment of a K-9 unit and a police helicopter and led to the lockdown of much of Gore Bay as the OPP requested members of the public lock their doors and remain inside until the incident was resolved.