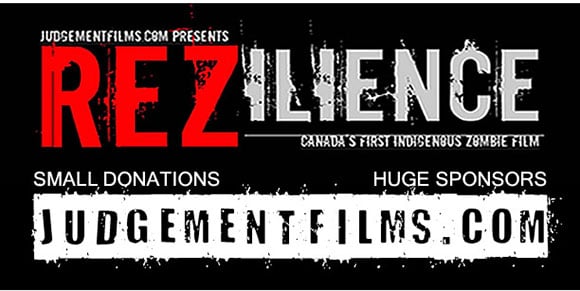 ESPANOLA— Jayson Stewart of Espanola is pretty pumped these days as his movie concept is beginning to take shape, with shooting due to begin in early August.

“This is my directorial debut,” he said. “We are going to commence filming the first 20 minutes of a proof of concept segment on August 4.”

This will be the actual first 20 minutes of the actual film, rather than a trailer or straight promo piece,” he explained. The proof of concept film will enable the filmmaker to approach various funders and potential investors with something concrete that will showcase Mr. Stewart’s filmmaker chops as well as demonstrate how well the storyline will play out.

The odyssey to this point actually began three years ago in Toronto. “We were throwing around some ideas for a movie and it just suddenly came together,” he said. “But it was only within the last year or so that we really became serious about it and started casting.”

All of the actors for the four main characters have been cast, including the lead character Dwayne Peltier played by 27-year-old actor Remington Louie and his mentor Vic ‘Doc’ Murdoch, played by actor Douglas E. Davidson.

Although the movie is in the horror film genre, the film is far from being one-dimensional. “It is common for good horror, science fiction and fantasy films to comment on social justice issues,” he said. “In the original Star Trek, race relations, the civil rights movement, oppression and privilege were woven into scenes featuring green skinned aliens and phaser battles.”

The film location is the fictional small fly-in Northern village of Serpent Lake, a community of 350 souls whose only contact with the outside world is by float plane or a seasonal ice road. “The ice road has not been open for very long in recent years because of the impact of global warming,” noted Mr. Stewart, citing just one of the modern commentaries layered within the production.

The characters are also more multi-dimensional and contain a depth not common to the zombie flick cadre. “There are different types of people, including a strong female lead and a character who follows a strong traditional Native path,” he said. There is also a two-spirited main character. “So there is the LGTB tie-in as well.” Most of the characters are under 30.

“In our film, REZilience, the character Dwayne Peltier, taken from his home reserve by the foster care system, returns and discovers who he is and how his community has been affected by residential schools, genocide, treaty violations, poverty and loss of culture,” said Mr. Stewart. “In fact, the zombies in the film are a result of a biological weapon tested on the people the same way smallpox was weaponized during early colonization of North America.”

So the film broaches many important subjects, but includes a lot of the nuances favoured by the zombie/horror set.

“In essence, we are broaching these important subjects as the characters discover who they are throughout the film,” said Mr. Stewart. “They use this knowledge and sense of self to survive and thrive. Their strength comes from their history and their discovery and rediscovery of who they are.” Mr. Stewart explains that the zombies are a “mixed metaphor for people who have lost their way, lost their connection to what’s important, of the infighting that can happen in communities, and our heroes represent those who are rising against oppression, against historical and modern acts of genocide and are taking their traditions into the future as powerful leaders in the community.”

“We could have done this story without it being a zombie film but I’m a zombie fan and, if it makes other horror fans think a little, then we’ve done our job,” laughed Mr. Stewart. “It opens these stories to a fanbase who might otherwise tune out of a story about Natives.”

Mr. Stewart is proud of the fact that his is not only the first Canadian zombie movie, “it is also the first in North America.” He points out that while there is another zombie flick with zombies, that film is a comedy, not a true horror film.

Dealing with issues such as the residential school system call for a more dramatic approach, but Mr. Stewart said that he is sensitive to the delicacy of the topic. “I can understand the sensitivity some feel and have full respect to all survivors, their families and those impacted by the system, racism and oppression,” he said. But adds that “the film isn’t about residential schools, it mentions them as one of the many issues that are affecting indigenous nations today. At no point will there be a mockery made of any issue. No issue will be made light of, in fact, the opposite is true and the issues will be woven into the story with the utmost respect.”

The project crew are primarily volunteer, at this point, but Mr. Stewart notes that there are three key people who are paid staff. “Although they are being paid, it is largely for their equipment,” he added.

Mr. Stewart hopes to have the film ready for the spring of 2017, just in time for the festival circuit.