WIKWEMIKONG—The wheels are in motion to see staffing increased at the Wikwemikong Emergency Measures Services (EMS) base as calls for service, and the subsequent wait, are increasing in line with the rest of the province as the ‘grey wave’—aging baby boomers—sweeps the country.

In an issue report presented to the Manitoulin-Sudbury District Services Board (DSB) by Michael MacIsaac, chief of EMS, he explained that there has been an increase in call volumes to the Wikwemikong station by 37 percent since 2008.

“This trend in call volumes is not expected to curb,” he said. “The province is expecting an increase in healthcare costs and usage of service as the population continues to age. It is a well-known fact that the elderly use healthcare in a very disproportionate amount as compared to the rest of the population.”

He explained that the Wikwemikong base has only one ambulance and that when that ambulance is out on a call, there is no longer an ambulance to service the community. Calls are then answered by other stations, such as Little Current or Mindemoya (known as a ‘stacked call’).

“That is of great concern to us,” Mr. MacIsaac said of the stacked call response time.

Upon review, “it becomes evident that an enhancement to the services in the area is warranted,” he said.

The proposed solution is to add a paramedic response unit (PRU) to the Wikwemikong base. This comes in the form of either a truck or SUV that would be staffed by one paramedic “which enables the service to provide a response to an emergency call inclusive of all treatment possibilities but without the ability to transport a patient,” the issue report states. The fact that the PRU cannot transfer patients also means it does not get used for patient transfers and therefore is always in the community, Mr. MacIsaac explained.

This model is also half the cost of a full ambulance in terms of staffing dollars, he said, and would be staffed seven days a week, 12 hours a day.

Mr. MacIsaac explained to the board that as the base is on a First Nation, it is 100 percent funded by the Ministry of Health and Long Term Care. There is a proposal currently before the ministry in conjunction with the DSB’s 2015/16 budget submission for the Wikwemikong base. “We are now awaiting their response,” he said.

Espanola DSB member Stewart Meikleham questioned what the community’s take on this move was.

DSB CAO Fern Dominelli gave background information on the history of the base and how it was once run by the Wikwemikong First Nation but that a number of years ago the community decided it no longer wanted to oversee it. The ministry then asked the DSB to take over operations while it would maintain the funding, which they did.

“Has chief and council been approached?” Mr. Meikleham asked.

Mr. Dominelli said no, they had not. “If we felt we needed political influence, yes, we would have, but we’re trying to do it (approach the ministry for funding) through our normal business process,” he responded.

“And why is there no representative from Wiky sitting at this table?” Mr. Meikleham asked.

Mr. Dominelli explained that the province is responsible for land ambulance service for First Nations and that he did consider going to the community for support on this matter.

“Each community wants to have autonomy,” Mr. Meikleham said. “Wouldn’t it have been a good idea to have gone to the band rather than force this concept on them? Shouldn’t there be a certain amount of communication to the community we’re providing this service to?”

Northeast Town Mayor Al MacNevin pointed out that not only is this a good move for Wikwemikong, it is also beneficial for Little Current and Mindemoya, whose ambulances will remain in the communities they directly serve more frequently and therefore their response times will be quicker. “Down the road, this paramedic response unit is probably a good idea for many reasons.” 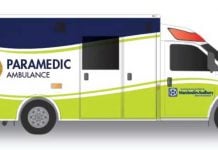