COCKBURN ISLAND – So far, the reports on the annual two-week gun deer hunt on Cockburn Island are good despite weather conditions. And it appears deer on Cockburn fared better in terms of survival rates last winter in comparison to deer on Manitoulin Island, says a representative of the Cockburn Island Sports and Conservation Club (CISCC).

“Well, the hunt so far has been surprisingly good,” stated Ian Anderson. “Despite the rain and high winds, there were 18 adult bucks harvested as of Tuesday evening (November 5, during the first week of the two week hunt) and there are just over 100 hunters on hand for the hunt,” said Mr. Anderson. “It appears Cockburn Island deer fared better than Manitoulin Island deer over the winter. On Manitoulin the snow was up to the waist on deer in mid-winter, but because of the freezing rain, and the crust built up on the snow, on Cockburn Island the deer could still move around on the crust on top (of the snow).”

He also noted the deer on Cockburn were able to access the lower limbs of trees to gain access to food sources.

“There doesn’t appear to be a shortage of deer on Cockburn,” stated Mr. Anderson. “And in places I’ve been to, I was pleasantly surprised with the number of deer around. I know in the late fall I saw a lot deer, including a lot of fawns. I guess Cockburn was lucky in a way, last winter, to have the right kind of adverse weather.”

However, Mr. Anderson further explained, “in the checking of deer there is a lack of body fat on the animals compared to most years, which we expected. And the antler beam diameters are down in some age classes, due to a lack of nutrition. But overall, the survival rate of the deer here (Cockburn Island) has been better than Manitoulin Island in comparison.”
The CISCC met on the Friday before the deer hunt. “We had a really good turnout, NCC (Nature Conservancy of Canada) representatives were present and did an update on what they are doing with the property they own,” said Mr. Anderson. “They own about 66 percent of the island property and are allowing the deer and small game hunts to continue on their property.”

Mr. Anderson noted the “our club has been planting apple trees on private property, with just under 100 trees having been planted, for the benefit of all wildlife.” He pointed out Cockburn has a good, healthy population of bear. He said after a snowfall on the Island a few days ago, “there were bear tracks everywhere. The Island has a really good oak nut crop, and beech, and a phenomenal apple crop; there is a lot of available food for bear and other wildlife.”

“Generally, the majority of hunters are seeing quite a few deer,” said Mr. Anderson. “There will be additional hunters the second week of the season,” he noted, pointing out that in total there will be about 125-130 hunters on Cockburn Island during the two-week deer hunt. 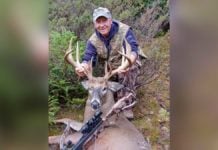