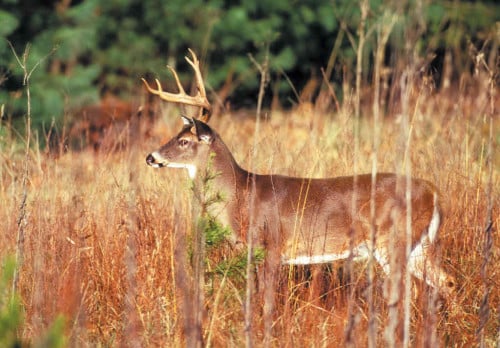 GORE BAY—A member of the Gore Bay Fish and Game Club says he is disappointed with the Ministry of Natural Resources and Forestry (MNRF) position that it will continue to discourage and prevent supplemental feeding of deer even when severe conditions in the winter put deer in peril.

“The MNRF (Ministry of Natural Resources and Forestry) have released a White-tailed Deer Management Policy for Ontario on the EBR (Environmental Bill of Rights),” said Ian Anderson, at a Gore Bay Fish and Game Club (GBFGC) meeting last week. “It includes a lot of profound statements objectives and goals.”

“One of the things that I am definitely not in agreement with is objective 3, provincial strategy 3.2 that the MNRF will continue to discourage and prevent supplemental feeding of deer,” stated Mr. Anderson.

The MNRF Objective 3: ‘Promote a healthy deer population,’ states under strategy 3.2, “explore approaches and, where necessary, take preventative action to address threats to deer health. Continue to discourage and, where appropriate, take measures to prevent the supplemental feeding of deer to minimize the likelihood of entry and/or spread of pathogens into Ontario.”

“As you know, the last time there was a need for supplemental winter feeding of deer, the MNRF position was not to feed them in any way shape or form,” said Mr. Anderson. “If wasn’t for Manitoulin Streams and local fish and game clubs and volunteers, who used equipment and other ways to save some deer, it could have been devastating to deer populations (on Manitoulin). It was the right decision at the right time.”

“In places where nothing was done to help the deer the impacts were devastating (2013-2014),” stated Mr. Anderson.

“I am very disappointed with the MNRF position to oppose supplemental deer feeding programs when we have severe winters,” said Mr. Anderson. He noted that comments on the EBR posting have to be made before the deadline of May 4, 2017.

Mr. Anderson said on behalf of the club and as chair of the club’s deer management committee, he “made a pitch that mandatory deer harvesting reporting should take place. The mail surveys that are sent in have too many faults, and poor data means poor decisions are made. To not implement a mandatory deer hunter harvesting collection program does not make a lot of sense.” He pointed out this kind of mandatory information has to be provided by hunters for turkey, black bear, moose and other species of animals that are harvested. “I don’t know why mandatory deer harvest reporting does not include deer. The system is already in place for other animals, and (the MNRF and hunters) know how it works. Why not do it for deer as well?”

“So with this (EBR) posting, you are saying the ministry is saying they are not in favour of supplemental feeding of deer in the winter or any time?” asked Ches Witty.

“I know when we had the tough winter in 2013-2014 it (supplemental deer feeding) made a difference on Manitoulin Island,” said Mr. Anderson. “We lost some deer on Manitoulin, not as many as we would have, and a lot of other places were far worse off than we were (in terms of deer loss),” he added.