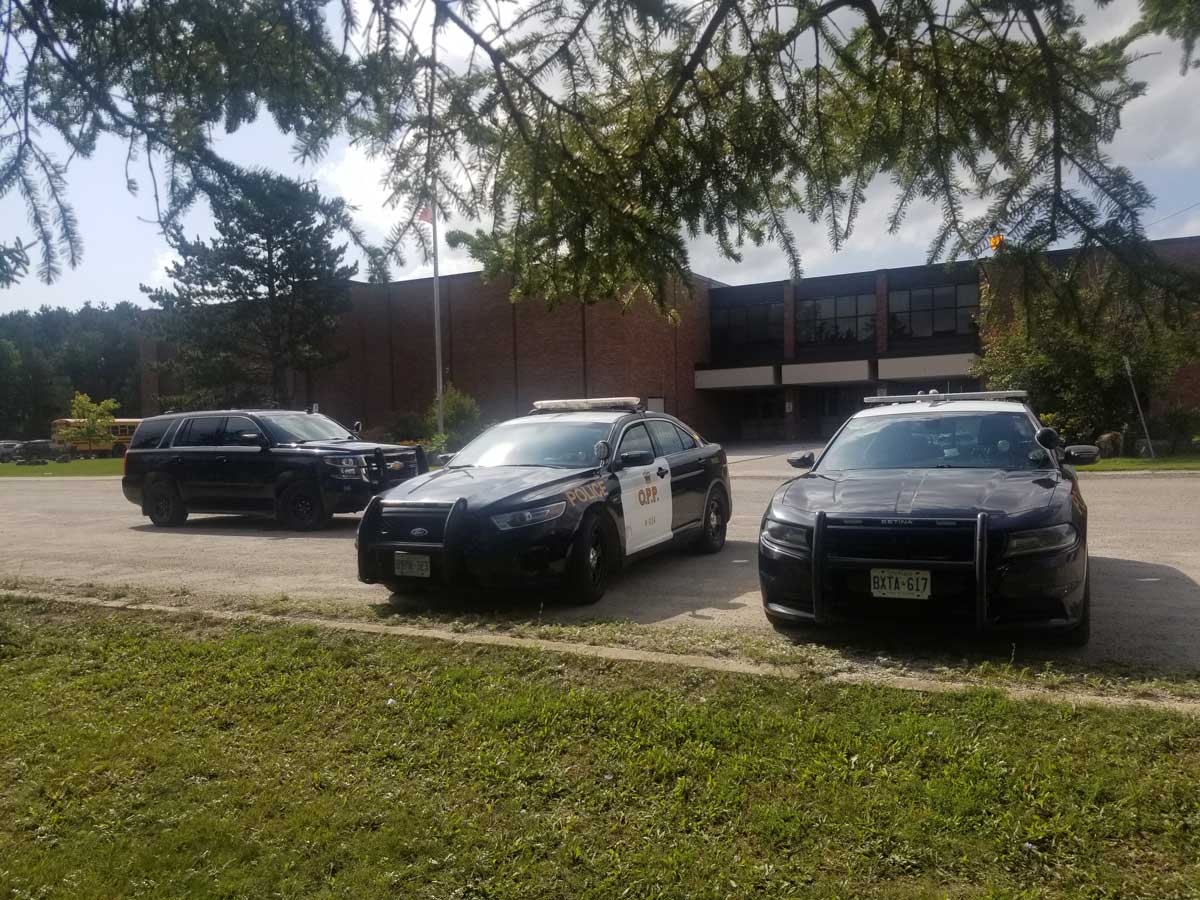 M’CHIGEENG—Last Friday marked an unprecedented and disturbing event at Manitoulin Secondary School (MSS), when an all-out brawl involving 50 or more students, both boys and girls, suddenly erupted. The event, students report, had a decidedly racial overtone.

Three Grade 10 girls, of both First Nation and Caucasian descent, spoke anonymously with The Expositor over the weekend, all saying they were deeply disturbed by what had transpired on Friday, September 14.

The girls said the morning started off uneasily when a very public argument broke out between a girl and a boy, both students at MSS. From there the fight escalated, becoming racially charged and bringing hordes of students outside to the side parking lot, near the back of the school. The Grade 10 students told The Expositor that two lines formed, one with white students facing another line of First Nation students. They watched in horror as the two sides flung insults at one another, hurling comments like “brown trash” and “white whore” at one another.

“Every insult you could think of,” one of the girls said. “It seemed to be M’Chigeeng against Little Current at first, and then it just went from there.”

Suddenly, one of the students threw a punch, and that’s when the melee ensued, the girls claim.

“They all started fist fighting, boys and girls,” one of the girls said. “Thirty to fifty kids fighting at once.”

The girls said everywhere they looked there were kids fighting—on cars, on the hill, in the bush.

“They were aggravated,” one of the girls said. “They were tired of race being put before anything else.”

The fighting, they said, lasted for upwards of an hour before a threat posted to the social media platform Snapchat caused the school to enter into a hold and secure procedure.

The girls said that, by the time they returned to their homes later that day, they were incredibly upset at the scene they had witnessed. It was a scene of utter mayhem, they said. One of screaming, swearing, girls fighting girls, boys fighting boys, boys fighting girls and teachers in the middle, trying to break things up.

Members of the M’Chigeeng community, alerted by their children as to what was happening at the school, began to show up and also entered the fray. As a result, one adult is facing charges.

Following the incident, a letter was sent home with all the students and a pre-recorded message from Principal Jamie Mohamed was sent to all guardians’ phones.

“So many kids have (cell phone) footage, but don’t want to do something about it for fear of retribution,” one of the girls’ mothers said.

“One child has been charged, but what are the consequences for the rest and what are the preventative measures being put in place?” she questioned. (By press time Monday, five youths and one adult had been charged in connection with the event, but the OPP tells The Expositor that more charges would be laid.)

When asked if the girls planned to attend school on Monday, one of the girls said “I don’t want to go, man.”

“None of them feels safe,” the mother added.

“If someone comes at me, I will punch them,” another of the girls said candidly.

“This is on a level that’s beyond what MSS teachers can do,” the mother said. “The Rainbow District School Board needs to step up. What is their plan? How does the school return from this?”

The race issue is of deep concern for her and many others, she said, and believes a multi-cultural school such as MSS should be teaching more about the shared cultures and the history of Indigenous peoples.

One mom told The Expositor that she believes there is racism on both sides, and bullying, which is probably a larger problem, she said.

(My daughter) is really upset over the whole thing,” she said. “They really need to educate their teachers for sure.” The mom was referencing one of the videos (which has been seen by Expositor staff) where an MSS staff member can be heard calling a student (The Expositor has not confirmed whether the person in the video was indeed an MSS student) “trash” while trying to break up a fight.

This newspaper has learned that the superintendent of schools is investigating the incident involving the staff member.

Her daughter, she said, is an academic, athletic, straight-nosed student who refused to go to school on Monday. “She shouldn’t have to miss school because of this.”

The mom said she was also upset with social media’s role in this as this served to ‘fan the flames.’

“Parents need to stop brushing it under the rug,” she added.

Another mother shared her email to MSS Principal Jamie Mohamed with The Expositor.

“I received your recorded message regarding the incident that occurred at lunch hour on Friday at MSS,” she writes. “I have also read the letter sent home with (student’s name) regarding this incident.”
“While your written statement and recorded voice message assured parents that the incident had been contained, as I’m sure you are aware, there is far more to this incident than what transpired Friday afternoon,” she continues. “It is my belief that the situation that took place Friday has not yet reached its conclusion and the environment at MSS is not yet conducive to the safety of my son.”

The Expositor has heard unconfirmed reports that upwards of 175 students were missing from school Monday.

Manitoulin-Espanola Ontario Provincial Police (OPP) Community Services Officer Constable Marie Ford wasn’t at the school at the time of the incident, but attended the school on Monday with two other officers from start to dismissal. Constable Ford also addressed the students during a special morning assembly to talk about the Friday incident.

Constable Ford said that seven officers, from both OPP and UCCM Police, attended MSS on Friday.

Many of the charges stem from online threats on social media, she added.

“We are appealing to all those with videos to turn them over to police so we can have every view,” Constable Ford said. “This can be done anonymously, or through Crime Stoppers. We’re not looking to create more of a problem.”

“We want this to be a safe place,” she said of MSS.

Constable Ford urged the students to be careful of how they use social media. On Monday, September 17, Espanola High School also held hold and secure procedure following an online threat of a drive-by shooting that appeared to have been precipitated by the MSS event.

Constable Ford is a regular in the halls of MSS and can be found there on many a lunch hour, walking the halls or in the cafetorium. She says there was no lead-up to the event that she was aware of.

The constable said the mood seemed to be happy and upbeat on Monday, but with some nervousness. During the assembly, Principal Mohamed said the students were incredibly attentive. “You could hear a pin drop.”

Constable Ford said she will be at MSS all this week and tells students that “if anyone is receiving threats, call right away so we know what’s going on.”

As a result of the Friday incident and subsequent online threats, it was decided to have a police presence at the school on Monday and Tuesday of this week.

When asked about the racist element to the student brawl, Mr. Mohamed said he didn’t believe it was the root cause of the problem, but later became the issue.

“In the heat of the moment, things were said,” Mr. Mohamed said.

He explained that the school was currently reaching out to all of its First Nation partners, including chiefs and councils, “to find out how we can move forward in a positive way.”

Mr. Mohamed asks students that if they hear of any threats to one another or the school to report it to the office, or police, immediately.

“The actions of a few don’t define us as a school,” the principal said. “We, the Mustang family, need to move forward in a positive way. We are all different and we need to embrace those differences.”

As for Tuesday, “we plan to have a full house as usual.”