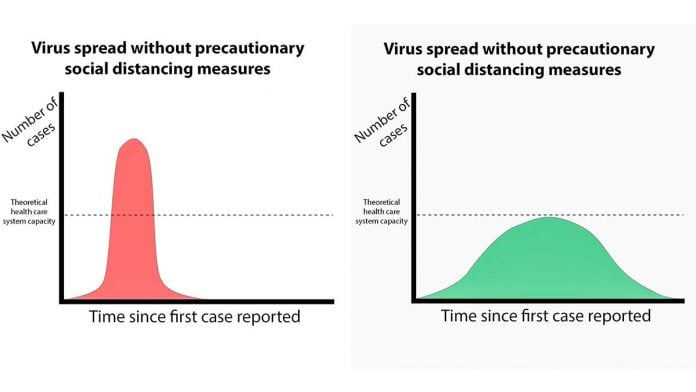 MANITOULIN – Ontario schools are closing for two weeks after March Break. Numerous businesses are switching to work-from-home protocol. Gatherings of more than 250 people are outlawed and groups of 50 or more are highly discouraged. People are being advised to not visit hospitals if they suspect they have the novel coronavirus COVID-19 and instead call hotlines and only visit dedicated testing sites. All people are encouraged to maintain a fair social distance from people they know.

Canada has taken all these measures, yet the virus is only impacting roughly 0.0012 percent of the population. Why have Canada, Ontario, municipal governments and private businesses gone to such lengths to mitigate the spread of the virus?

It’s a strategy known as ‘flattening the curve,’ and it’s currently the best way to ensure that the Canadian health care system will be able to keep up to the demand as more and more people inevitably fall ill across the country. But what is flattening the curve, anyway?

The above graphic shows the estimated rate of cases of a pandemic such as COVID-19. As more people get in contact with one another, the case rate rises exponentially. The rate then drops off as people gradually stop living with the virus.

The vertical Y axis of the graph indicates the number of people infected while the horizontal X axis indicates the time that has passed since the virus has begun to spread.

The health care system’s capacity to handle cases of the virus lies somewhere on the Y axis, and this level is different depending on factors such as doctors per capita, rate of spread in an area and total population.

Generally, the health system’s capacity is somewhere well below the peak of a typical pandemic spread rate, meaning health care providers will be overwhelmed by the disease and unable to treat people who need the support. As you might imagine, this is a major problem.

However, after watching the virus spread in other parts of the world before it came to Canada as well as following health best practices, mankind has developed a list of protective measures which include some of the things mentioned at the start of this story like reducing mass gatherings and encouraging social distancing between individuals.

Here’s what the impact of those actions can look like if they work according to plan:

Although these measures don’t necessarily reduce the total number of people who get down with the sickness, they can have a minor effect on those figures. The real purpose is to keep the cases underneath the capacity of the health care system so that doctors are never overwhelmed and the people needing the most care can get the help they need. This will also decrease the death rate of the illness.

It is also important to note that these measures have to be in place long-term (until the outbreak ends) or else the curve may flatten initially but exponentially increase once again if the public gets complacent.

This is a whole-country effort as much as it is a whole-planet effort. Every single person needs to look at their actions and how they may potentially be at risk of spreading the disease, and actively change their actions to help reduce transmission rates.

Nobody is immune to these actions because without total participation the efforts will not be effective and the virus will be allowed to run rampant across the country. A Maclean’s story from March 15 showed that Canada is not presently flatting the curve effectively, with the increase in cases looking more exponential.

There is still time to change the future of COVID-19 in Canada. It is crucial that everyone assess their own activities and find ways to increase the social distance between themselves and others, because their health and the health of loved ones and friends depends on it.

This does not mean clearing store shelves of toilet paper and food—long-term estimates show that these products will be back fully stocked shortly. In fact, ‘panic buying’ supplies can make the problem worse because it can spark unnecessary anxieties in others who observe the behaviour.

Ontario Premier Doug Ford has urged Ontarians to stop this counter-productive behaviour and said he was confident in the supply chain’s ability to restock shelves in due time.

Instead, find activities you can enjoy either alone or with a close partner, avoid large gatherings and join in the proud worldwide fight to stop this virus in its tracks.

This may be easier said than done given March Break falling on this week, as well as school closures in Ontario for two weeks afterward, but places such as the Township of Assiginack (which cancelled its March Break gatherings in an effort to flatten the curve) have done some work to help this along.

On Assiginack’s Facebook page, the township will be posting a new activity idea each day to encourage social distancing. On its first day it shared a link of 100 activities to do at home, its second day featured St. Patrick’s Day preparation ideas and the third day featured a drawing contest for kids for the chance to win a gift certificate.

Get creative, make the most of your downtime and, above all else, keep those hands washed. The Expositor will keep you up to date with the info you need until we see the other side, including through a Facebook live stream with Dr. Mike Bedard, where you can ask questions about the virus and its potential impact on Manitoulin. That is to be held tonight, March 18 at 7 pm.