AMSTERDAM, NL—Former Expositor intern Giovanni Capriotti was named as one of the top photojournalists in the world last week when he was awarded a first place in the prestigious World Press Photo 2017 awards in Amsterdam.

Mr. Capriotti took the top honours in the Sports, Stories category of World Press Photo 2017 for his article and photo titled ‘Boys Will Be Boys.’ The article and photos explore Toronto’s only gay rugby team, the Muddy York Football Club—an idea he first came up with while seeing the players participate in the annual Toronto Pride and Remembrance Run. Realizing the potential for the story, he banked it in his memory, later pitching it to his professors at Loyalist College. He eventually ran with it, forming a close bond with the players who now consider Mr. Capriotti their official photographer, spending two weeks with the team and capturing what became ‘Boys Will Be Boys.’

“At the beginning I didn’t know what I was doing, but I got to know them and their message of inclusion in sport—from all sexual orientations to level of sport—they accept everybody,” Mr. Capriotti told The Expositor. “These guys are doing something nobody understands—they are deconstructing the masculinity of sport.”

Last year Mr. Capriotti even travelled with the team to Nashville, Tennessee to capture them participating in the Bingham Cup named for Mark Bingham—a pioneer in the world of gay rugby and an American hero. Mr. Bingham was aboard United Airlines Flight 93 on September 11 and was one of a group of passengers who took matters into their own hands, attacking the hijackers and causing the plane to crash land in a field instead of its intended target of Washington, DC.

Mr. Capriotti, who spent a month with The Expositor in the spring of 2015, showcased his self-proclaimed ‘documentary style’ of photography and writing in the pages of this newspaper including a spread on the Burt Farm, fishing with Purvis Fisheries and spending time with the Meeker’s Aquaculture crew, among other projects. His photography and writing earned The Expositor nods at the Ontario Community Newspaper Association’s Better Newspapers Competition as well as the Canadian Community Newspaper Association annual awards.

Mr. Capriotti said he is overwhelmed with the amount of attention he received, and is especially pleased with the positive attention his alma mater is receiving, Loyalist College. “It gives them a boost,” he has said.

Mr. Capriotti said he hopes to get back to Manitoulin to do more documentary work, perhaps even a piece on this very newspaper. 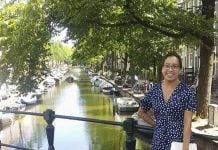