RAMA – Four of Manitoulin Island’s Anishinaabe community leaders were celebrated at a ceremony last week by the Anishinabek Nation, at which they received lifetime achievement awards from the organization.

“It was a very good evening. There was lots of friends and people I knew from all over the place,” said Wiikwemkoong artist Leland Bell, one of the award recipients. He, along with 17 other people, was slated to receive an Anishinabek Nation Lifetime Achievement Award this year at the annual gala celebration.

Mr. Bell received his award in the arts and culture division. He helped to design the Laurentian University coat of arms (the same school from which he holds two degrees, including an honourary doctorate) and has recently participated in the nationwide Artists Against Racism public art campaign.

“I’m still very honoured and humbled by the whole situation and for the people that had the forethought to see that I might be eligible for it,” said Mr. Bell.

Former Wiikwemkoong band councillor and community volunteer Cecilia Pitawanakwat was another recipient for her work within her community and as a water walker.

“There was a good spirit of accomplishment. All four regional chiefs were there to say congratulations as well as Grand Council Chief Glen Hare. The (Anishinabek Nation) Regional Chair Chief Scott McLeod presented me the award,” said Ms. Pitawanakwat.

In her acceptance speech she made reference to all those who helped support her efforts and create opportunities for people like her to become involved. She also said it was great to see council’s efforts such as the Wikwemikong High School coming to fruition.

Aundeck Omni Kaning (AOK) Ogimaa-kwe Patsy Corbiere said it was an interesting evening that allowed the recipients to share their insights and stories of what they had learned through their experiences.

“It feels good because, at the end of the day, somebody’s recognizing you for your work. I’ve always worked for the betterment of my people in AOK and have done a lot of work on other things like the UCCM Tribal Council,” said Ogimaa-kwe Corbiere. “It’s an honour to get an award for your hard work.”

She acknowledged all of her fellow award recipients from Mnidoo Mnising who have put in countless hours of tireless work to achieve the things they had accomplished.

“They all deserve to be recognized. Cecilia worked hard for Wiikwemkoong. She was on council and worked in the administration. Leland Bell for his paintings and teachings, and he has a doctorate. Shirley Cheechoo has done a lot of work with the film institute. I know how much work she does because she’s used AOK for her film festival,” said Ogimaa-kwe Corbiere.

“Those are all high accomplishments. Everyone from the Island, they’re all deserving.”

Ms. Cheechoo, who founded Weengushk Film Institute as well as Debajehmujig Theatre Group, has had a hand in creating numerous community building opportunities. She was of few words when asked about winning the award, but expressed her gratitude and acknowledged the team effort that is involved in any successful community initiative.

“I went up on behalf of everybody that’s helped me get where I am. I didn’t go up for myself,” she said. 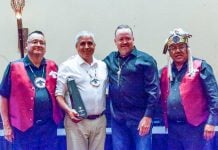 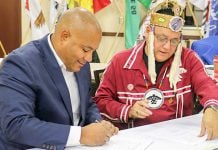