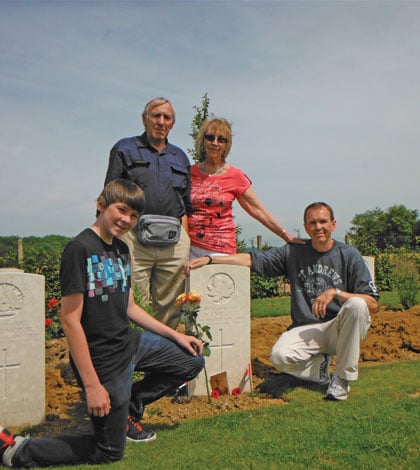 CLARINGTON—The family of fallen Canadian Private Robert James Willett (originally from Gordon Township) recently had the opportunity to view his gravesite on a trip to Villers-Bretonneux Military Cemetery at Fouilly, France, having possibly been the first family members to see the gravesite 95 years after he was buried.

“Our journey to this battlefield of the Great War (World War One), 95 years on, is quite possibly the first made by any of Robbie’s family,” said Peter Bischoff. “While my parents, Jack and Jo-Ann (great niece of Mr. Willett), have regularly visited the Gordon Cemetery on Manitoulin Island, this European journey was one of great emotion for all, experiencing both peace and closure, particularly when observing first-hand the great diligence, care and dignity demonstrated by the staff of the Commonwealth War Graves Commission in preserving and maintaining this startlingly beautiful cemetery and memorial.”

“As a father, it was with great pride that I observed the inspired awe with which my 14-year-old son, Alek, entered the cemetery and, after searching among the countless rows, discovered his (Robert James Willett’s) resting place,” said Mr. Bischoff. On his great great great uncle’s grave he then carefully placed poppies and Canadian flags alongside roses and a 100-year-old photograph of Robbie himself, before proceeding to document in hundreds of digital photographs the headstones, the monuments and stone edifices and the surrounding Somme valley where now his great, great, great uncle Robert James Willett rests with so many others.

“Peter (Bischoff), my son, is a principal at a school in Cobourg and he has a Master’s in European History, so for him this trip was the best thing ever,” Jo-Ann Bischoff told the Recorder. “Robert Willett was the uncle of my father Gordon and the Willett family silo is still located on Poplar Road, lot 335, in Gordon Township.”

Ms. Bischoff explained that she and her husband Jack, Peter and Alek had made the trip as part of a summer vacation trip.

“It was wonderful,” stated Ms. Bischoff. “Yes, we did expect to see the site. Peter had archived its location and we have a CD on it.”

The 14-year-old Alek Bischoff found his relative’s grave amid the rows of white gravestones. He told the Durham Region newspaper that the family left a photo, flowers, a Canadian flag and poppy pins, as people do that so other people know who (their relatives) were. Robert James Willett is the young man’s great-great-great uncle.

Alek Bischoff said the experience is going to change how he sees the war history he learns in Grade 9. He also expects Remembrance Day to have special meaning this year.

“Robert died in the battle at Amiens,” said Ms. Bischoff. He had been wounded on August 8, 1918, having been part of the Allied offensive. Canadian Infantry broke through the German lines and advanced 13 kilometres. During the battle, 1,036 Canadians were killed and 2,803 were wounded, one of them being Mr. Willett. The latter died two days later, upon arrival at the casualty clearing centre.

Mr. Willett was buried in the Villers-Bretonneux Military Cemetery with 194 Canadians and almost 2,000 other Allied soldiers.

“Over the past few months I have been learning as much as I can about my great-great uncle,” Mr. Bischoff told the Recorder. He noted Mr. Willett had volunteered for the Canadian Expeditionary Force on April 15, 1916, and joined the Reserve Battalion in November 1917.

“Mere months after the Great War’s end, at a site three kilometres south of Gore Bay on Manitoulin Island, a stone monument was erected in the Gordon Cemetery by the local Women’s Institute to honour the loss of eight local sons,” wrote Mr. Bischoff. “For each of the fallen, their age, dates of birth and passing, and final resting places on the battlefields of Belgium and France, are inscribed. Decidedly unique among them, however, is carved one mother’s (Elizabeth Leonard Willett) mournfully determined poetic effort to cling to the memory of her lost son: ‘He was a hero, dear is the grave, where dear Robbie is laid, sweet is his memory that never will fade, flowers may wither and leaves may die, but to forget him never will I’.”

Born April 10, 1895, on a recently established Manitoulin farm to Peter Andrew and Elizabeth Leonard Willett, Robert James Willett was the youngest of 14 children. His birthplace was a two-storey wooden farmhouse on Poplar Road that still stands today within sight of the Gordon Cemetery monument, explained Mr. Bischoff. As the youngest child, with seven brothers and six sisters before him, Robbie left the family farm on Manitoulin Island and followed the western path previously taken by his brothers, Franklin and David, and his sister, Margaret, away from Lake Huron to seek his fortune as a single farmer on the prairies of Canada’s west in Saskatchewan.”

“Fifteen months into the Great War, however, his agricultural career path was interrupted when, whether for reasons of patriotism, adventure, or to heed the call of duty, on April 15, 1918 Robbie left farming behind and volunteered for the Canadian Expeditionary Forces in Semens, Saskatchewan. He had reached the age of 21 only five days earlier. Robbie became a soldier in the 214 Overseas Battalion. His attestation papers list only his mother, Elizabeth, as his next of kin in Gore Bay on Manitoulin Island.”

“In the early hours of August 8, 1918, the Allied offensive began with waves of Canadian infantry advancing behind a creeping artillery barrage, smashing the German lines,” continued Mr. Bischoff. “German General Erich Ludendorff declared this ‘the black day of the German Army.’ Later considered the first of the hundred days in the countdown to victory, Allied medical facilities were quickly overwhelmed, for no previous offensive had anticipated both the sheer number of wounded at the onset of the campaign, and more specifically the huge challenges presented by the unprecedented rate of the Canadian advance-fully 13 kilometres on that first day, bounding further across the German lines than any other Allied force. There advances were paid for dearly in Canadian blood, with 1,036 Canadians killed and 2,803 wounded. Of the First Battalion of the Canadian Machine Gun Corps, 22 soldiers were killed and a further 82 were wounded, one of whom was Robbie Willett. We have yet to discover precisely where or in what manner this took place. We know only that Robbie’s wounds had been significant, for they would soon prove fatal.”

“The astounding advance of the Canadians on the first day of the Battle of the Amiens had made the movement of wounded soldiers to the rear ever more time consuming,” said Mr. Bischoff. “During the static trench warfare of the previous four years, the wounded fell closer to their own trenches and medical care, though aiding the wounded and carrying them to care across a cratered and muddy no-man’s land under fire remained an exceedingly dangerous, difficult and time consuming task. Racing up to 13 kilometres across the German lines on the first day of the offensive, wounded soldiers were first carried to back to their lines by stretcher bearers and then loaded en masse into horrifically crammed railcars to be moved to the casualty clearing stations in the rear. Robbie’s journey would take days. By the time he arrived at the 48 Casualty Clearing Station on August 10, far to the rear of the now rapidly advancing front lines, Robbie had succumbed to his wounds. Robbie died on the very day German General Ludendorff advised Kaiser Wilhelm II to sue for peace—a peace which would remain elusive for a further 98 days.”

“In the absence of concrete information about the nature of Robbie’s wounds and passing, apart from the confirmation of his death by wounds, one can only speculate about the manner in which Robbie received his mortal wounds during the first day of the Amiens offensive,” said Mr. Bischoff. “Whether from artillery or bomb generated shrapnel, machine gun or rifle fire, Robbie fell in the field along with thousands of his Canadian comrades that day. While we have yet to discover these details, if indeed we ever will, we have at least identified his resting place, for Robbie, though lost in battle, is now found at rest in the hilltop Villers-Bretonneux, Military Cemetery near Fouilly, France.”

With hundreds of others, Robbie was at first buried in the hospital cemetery in Dury, as is duly noted on the 1919 Monument in Gordon Cemetery. He would not remain there for long. In 1925, 444 graves were moved from the Dury Hospital Military Cemetery to the Villers-Bretonneux, Military Cemetery. Among them were 195 Canadians, including Private, Robert Willett.”

“The Villers-Bretonneux Military Cemetery contains 2,142 graves, with 609 unidentified. It is, for Australians, a national memorial, just as the Vimy Memorial remains for Canadians. At Villers-Bretonneux the names of 10,982 missing Australian soldiers are inscribed on the memorial for whom there was then no known resting place. At the Vimy Ridge Memorial the names of 11,285 missing Candians are inscribed. It was here, this summer, 95 years after his passing at Amiens, that three generations of our family travelled to find Robbie in his final resting place.”

Mr. Bischoff explained, “immediately upon climbing the broad stone steps and entering the cemetery, it becomes evident that these soldiers at rest did not know peace for long, for their hilltop resting place bears the deep scars of the fierce German aerial and armoured assaults launched against Senegalese defenders who here stood and attempted to halt the Blitzkrieg across France in 1940. While the most significant damage was repaired during the 1950s, strikes from bullet and cannon fire scar most of the buildings and larger stones, but cannot mask the impressive architectural and artistic efforts that went into designing the cemetery and national memorial. A stark contrast exists between what once would have been a hellish battlefield for two years and what is now an immaculately maintained national memorial of tremendous beauty.”

“Poppies, crosses and aged photographs have been carefully placed along the walls among the names of the 11,000 missing Australians to show that these soldiers, too, are not forgotten, and that Australian visitors to Villers-Bretonneux had indeed travelled half-way round the world to find, honour and remember their fallen. Climbing to the top of the Australian National Memorial tower and overlooking the vast Somme valley, with poppies dotting the roadsides and crops waving in the wind, one tries to step back and visualize the pitted landscape of desolation that here would once have been inescapable, seeing clouds across the same sky from which nearby plummeted the Red Baron, Manfred von Richthofen’s red Fokker triplane in April, 1918.”

“Across and around the rows of Villers-Bretoneux, the poppies grow in abundance during August now, just as in 1918. Elizabeth Willett would pass 11 years after her youngest son in 1929,” said Mr. Bischoff. “Through our visit to Robbie’s resting place we have sought to ensure one mother’s son will be remembered well into a second century by the youngest members of our family. Indeed, the very house where Robbie was born on Poplar Road now echoes with the sounds of his great, great, great nephews. Ninety-nine years on, Robert James Willett, Private #267834 of the First Battalion of the Canadian Machine Gun Corps, is remembered.”