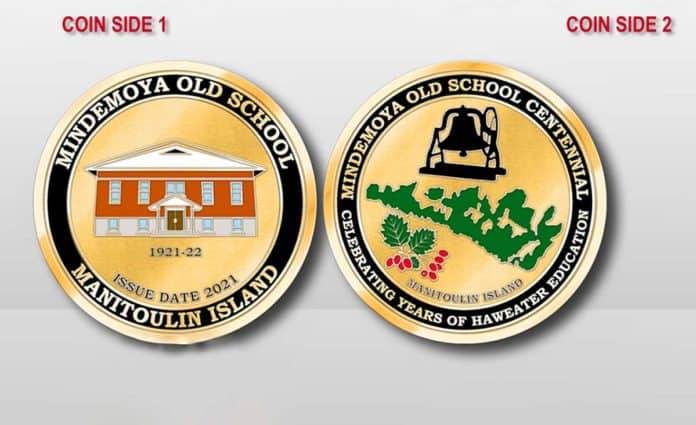 MINDEMOYA – The Friends of the Mindemoya Old School are set to mint their first fundraising effort, a commemorative coin marking the historic edifice’s centennial, due this year.

“There will only be 100 coins minted,” said Jim Smith of Mindemoya, the designer of the coin. “We are framing it as a commemoration coin celebrating the Mindemoya Old School building’s centennial, not as an obituary.”

The new coins may still be in the “gauging interest” stage, according to Mr. Smith, but with over half of the run already spoken for, their production is pretty much a given.

The gold-coloured coins, which feature a face side image of the Mindemoya Old School and an obverse bearing images of an old school bell, Manitoulin Island and a sprig of hawberries are, by all accounts, fully Grand Haw approved.

The price of each coin is set at $25 and pre-orders are limited to five coins. The coins come with an option of a velvet presentation case at eight dollars or velvet coin bag at $1.50. Shipping is five dollars, unless the purchaser wants to pick up their order in person at Williamson’s Hardware in Mindemoya.

The Mindemoya Old School is a two-storey stone building, one of the very few such historic buildings on Manitoulin Island and slated for demolition by Central Manitoulin council in order to make way for a new multiuse recreation complex that would have replaced the aging Mindemoya arena.

Members of the Central Manitoulin community who wanted to save the venerable building from the wrecking ball have been opposing the demolition for years with little success in diverting the building’s momentum toward oblivion, despite the formation of a committee researching alternative uses for the building and several pauses in the process by the municipal council.

The latest reprieve for the Mindemoya Old School came following a presentation to the Central Manitoulin property committee by the Ontario Historical Society which outlined the various means through which the building could be preserved, one of which was the formation of a not-for-profit dedicated solely to the building’s preservation and management.

The Friends of the Mindemoya Old School was formed and council agreed to hold off on the issuing of requests for proposals until September to give the group time to find a sustainable model for the preservation of the historic building.

“This is a positive sign from the council,” said Joanne Smith, Mr. Smith’s wife who has also been very active in promoting efforts to save the Mindemoya Old School. Ms. Smith admitted that many supporters of the preserving the building had been demoralized by what seemed a never-ending series of setbacks. “There is a new sense of hope,” she said.

In addition to the coin initiative, the Smiths are also gathering stories and photographs with the aim of creating a commemorative book as another fundraiser.

“There are so many stories in the community that are attached to that building,” said Ms. Smith. “Mike Smith was the very first student to walk through the doors of the Old School,” she said. “He later became a school bus driver. He ruled with the gruffest voice and we were all terrified of him, but he had the softest heart.”

It is memories like these that attach the heartstrings of the community to the Mindemoya Old School and has led to the passionate response of those working to save the building. 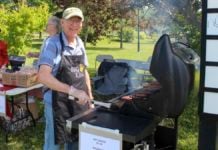