M’CHIGEENG— The Kenjgewin Teg Educational Institute ( KTEI ) Truth and Reconciliation 9th Annual Teach-in saw a packed house on Friday, October 23. Organizers of the teach-in expressed satisfaction that those attending the event came from a wide range of demographics.

“That is what we had aimed for,” noted KTEI Director of Business and Training Beverley Roy-Carter. “It is good to see people from so many different communities coming out to learn more about the Truth and Reconciliation Commission report and what it means going forward.”

The event was opened by elder Gloria Oshkabewisens-McGregor, Mukwa Dodem (Bear Clan), one of KTEI’s Anishinabek traditional knowledge holders, who also provided the closing teachings focussed on ‘An Understanding of Reconciliation’ and filling the void within through the Seven Grandfathers connection to the body.

The keynote speaker for the teach-in was Joan Riggs, a founding partner of Catalyst Research and Communications who teaches for Ryerson University and the First Nations Technical Institute, and Gloria Oshkabewisens-McGregor.

The teach-in focussed on the questions of “What has the TRC report process told us?”, “How does this report apply to our community and day-to-day work and lives?” and “Moving the Report Forward.”

Ms. Riggs began by providing an overview of the major findings and 94 recommendations of the TRC report and what the potential impacts might be on government policy as a result of the report for First Nations and for Canadians in general and what the response has been from the government and Canadians.

There were high points and low points during the TRC process, with the first gathering in Winnipeg posting an unmitigated disaster. “I refused to be part of that event because I could see where it was heading,” said Ms. Riggs, a result that she suggested came about in part because of the sheer volume of survivors that came out to tell their stories at that first gathering. She explained that there were so many survivors at the first event that they were forced to sit in rows, harkening back to how they were forced to sit while attending residential schools. The result was that “They were traumatized and there were not enough support people and elders there to counsel and support the survivors.” Worse, having steeled themselves to provide their stories, hundreds of those survivors attending the Winnipeg gathering found that, due to the numbers attending, many were unable to make their statements.

The second event in Inuvik was better, admitted Ms. Riggs. In fact, as time went on the TRC learned to improve what was and remains a very traumatic experience less onerous on those attending.

One of the seminal events to take place during this period was the unveiling of a stained glass window designed by renowned Metis artist Christi Belcourt. This stained glass window, filled with poignant symbols, now resides in the central foyer of Centre Block in the House of Parliament.

“The apology was just words,” noted one survivor. “This was real.”

“When the parliamentarians come out of the House, they see that window,” rejoined another.

By the time the TRC hit Saskatoon, it had become a very powerful gathering, and when the Vancouver gathering took place in that city in the fall of 2013, that community dedicated a week to recognizing the work of the TRC.

“There were 60,000 people who came out in the rain in a show of support for the cause,” said Ms. Riggs. “This is what we can do when we come together as a community.”

The final gathering took place in March 2015 in Edmonton and by then the TRC had largely gotten the process right, the importance to the reconciliation process of events such as the KTEI Teach-in in helping to build bridges between mainstream Canada and the indigenous peoples on whose territories the nation was founded was clearly demonstrated by Ms. Riggs when she relayed the anecdotal experiences from a snap survey done on the streets of Edmonton, when it was hosting that final seventh gathering, following on years of media exposure. “Less than 50 percent of Edmontonians knew about the TRC and what it meant,” she noted, surmising those results suggest that “when you are in a place of privilege, you can avoid seeing.”

“This is a part of your history as Canadians,” said Ms. Riggs. “That so many people still do not know the truth tells us that there is still a lot more to do.”

“Today,” noted Ms. Riggs, “there are more aboriginal children apprehended (in care by child protection agencies) than were in the residential school system.” The issue, she noted, is far from over, even though the last residential school closed its doors in 1996. “Not so long ago,” she said.

Following Ms. Rigg’s presentation on the chronology of the TRC process and its recommendations, those attending formed into smaller circles to work on an exercise to create a pictorial representation of the impact of the residential school system on our communities and every day lives.

Many of those pictorial representations focussed on the plight of the more than 1,200 murdered and missing Native women and the need for a national inquiry, the loss (and revitalization) of culture and language.

As part of the ‘Moving the Report Forward’ part of the teach-in, the combined group put together a draft of a letter to the prime minister designate, Justin Trudeau, calling on him to honour his pledges to build a renewed relationship with indigenous peoples. The letter will be distributed to those attending the teach-in to send in to the incoming prime minister and to the Ontario premier, as many of the concerns outlined impinge on areas of provincial responsibilities.

Elder Oshkabewisens-McGregor took the assembly through a presentation focussed on the teachings of the Seven Grandfathers, their relationship to the parts of the body and how the teachings can assist in filling the void created within by the impact of the residential school system and hundreds of years of genocidal policies imposed by the government and various church organizations.

An honour song was sung for the two residential survivors who were in attendance at the KTEI Teach-in before the conclusion of the event.

It is not yet certain whether the KTEI Teach-ins will be able to continue, but Ms. Roy-Carter said that it was the hope that they could continue in some form in future years 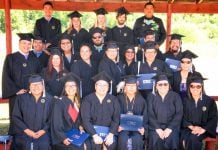