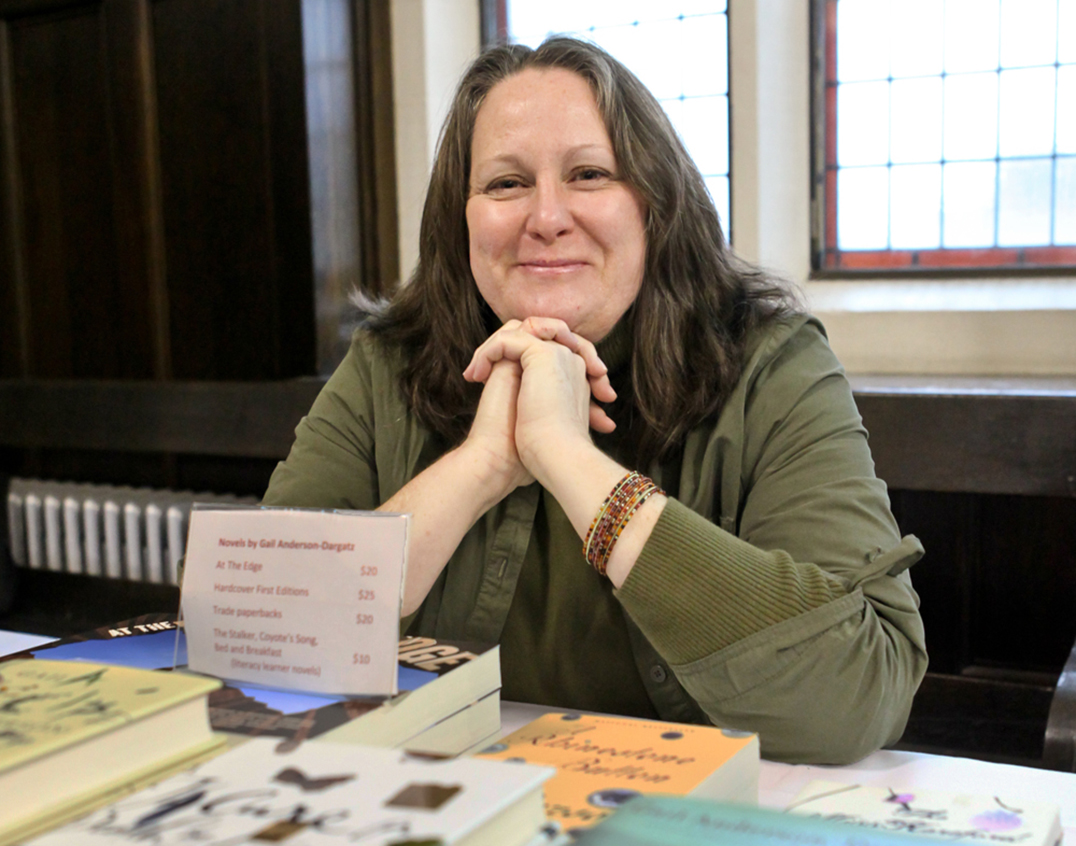 TORONTO— Twenty years after Gail Anderson-Dargatz’s beloved, bestselling debut novel ‘A Cure for Death by Lightning’ was published as one of the inaugural novels in Knopf Canada’s New Face of Fiction programme, publisher Anne Collins is delighted to announce that Knopf Canada will publish Anderson-Dargatz’s new novel, ‘The Spawning Grounds,’ in the Fall of 2016.

Award-winning author Ms. Anderson-Dargatz is a summer resident of Providence Bay who held a writers’ camp at her home last month for budding novelists.

Ms. Collins says, “This new novel is full of those qualities Gail’s fans love—it’s an intimate family saga, with a striking female protagonist, situated in the Thompson-Shuswap region, a landscape that Gail knows so well, and saturated with the history of the place. But it’s also a bold new reach inspired by Gail’s desire to tell a story that bridges white and Native cultures across a bend in a river that runs into Shuswap Lake.”

On one side of the bend is a ranch once owned by Percy Robertson, who came in the gold rush around 1860, and stayed on to settle the place; on the other side, is a Shuswap community that has had its own tangled history with the river and with the whites. The story is centred on Hannah and Brandon, present-day teenagers who have been raised by their grandfather, Percy’s direct descendant, after a family tragedy. As the novel opens, the river is dying and the salmon run is in crisis: the region has experienced a three-year drought, reducing the flow to a trickle so the salmon can’t get where they need to go; and development threatens to damage the river further. Hannah is physically carrying fish past the chokepoint, as her childhood best friend, Alex, leads a native protest against the development. Then an accident on the river nearly claims the lives of both Hannah’s grandfather and her younger brother, Brandon, and their world is thrown into chaos. Hannah, and Alex, and most especially Brandon come to doubt their own sanity as they are pulled deep into Brandon’s numinous visions, which summon the myths of Shuswap culture and family stories of the past.

“The book hovers beautifully in the fluid boundary between two cultures,” Ms. Collins says, “between past and present, between the ordinary world and the world of the spirit: all disordered by the human and environmental crises that have knit the Native and white world together here in drama and love and tragedy for 150 years. This is not a black and white rendering: on both sides of the river, people are enlightened, or not; in denial or not; marauders and exploiters, or not; able to love, or not. Gail always puts the human drama front and centre, which means that the book resonates like crazy as story.

“It is also exciting and somehow really fitting to be publishing a new novel by Gail in the 20th anniversary year of the New Face of Fiction, since she was one of the four amazing writers who published novels in that first year, back in 1996, along with Yann Martel, Ann-Marie MacDonald and Dionne Brand,” the publisher added.

Ms. Anderson-Dargatz is thrilled at this 20th anniversary connection between her first novel and ‘The Spawning Grounds,’ especially as there is also a link in the new novel to the characters in ‘The Cure for Death by Lightning.’ “While I won’t give it away,” she says, “I think readers will be delighted to see at least one familiar face.”

Ms. Anderson-Dargatz has been published worldwide in English and in many other languages in more than 15 territories. ‘A Recipe for Bee’s and ‘The Cure for Death by Lighting’ were international bestsellers, and were both finalists for the prestigious Giller Prize in Canada. ‘The Cure for Death by Lightning’ won the UK’s Betty Trask Prize, the BC Book Prize, the VanCity Prize, and was shortlisted for the Chapters/Books in Canada First Novel Award. Both ‘Turtle Valley’ and ‘A Rhinestone Button’ were national bestsellers in Canada. ‘Turtle Valley’ has gone on to sell internationally as well. Her first book, ‘The Miss Hereford Stories,’ was short-listed for the Leacock Award for humour. For more, please visit her website at www.gailanderson-dargatz.ca.