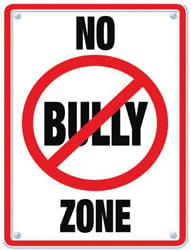 EDITOR’S NOTE: This is the first article in a multi-part series examining teen bullying in Manitoulin High schools. This week, The Expositor speaks with Reggie and Steve, two students at MSS who have openly identified as lesbian and gay. We are not using their real names.
by Stacey Lavallie

PROVIDENCE BAY—Steve is just a normal Manitoulin teenager. He likes 80s pop, classical and current pop music. He hangs out with his friends and does “stupid teenager stuff.” He likes to watch television and hang with his friends.

“I knew in Grade 8 I was gay,” Steve said. “I had been dating a girl and nothing was there.”

He said he chose to come out about his sexual orientation to a friend because he wanted to be truthful about who he was.

“I told my closest friend,” Steve recalled. “She said ‘Oh my god, this is so awesome.’” He said most of the people he went to school with in Grade 8 knew him well enough to accept him this part of his life, but things changed a bit when he got to high school.

“In high school, most people are cool,” Steve said, but he also added that some people aren’t accepting.

“It’s an island,” he said. “Everyone knows each other. People don’t know what to do about an openly gay kid. People aren’t very tolerant.”

“(A friend) continues to say things that hurt,” Steve recalled. “They all revolve around my sexuality. Just the other day, she told me she was going to ‘slap the gay’ out of me. Even with my friends, I don’t feel that accepted. I feel like a pet, their ‘gay friend’.

” Steve said that teachers react to the more offensive words people use to describe gay individuals, but let off-the-cuff usage of the word ‘gay’ continue. However, there are more teachers reacting to that now than there once was.

“Ms. Bauer heard a kid say ‘That’s so gay,’ and she stopped what she was doing and told everyone to not use homophobic slurs in her classroom,” Steve recalled.

Reggie spoke with The Expositor following the second meeting of the MSS Rainbow Rights Alliance, the recently formed equity group at the school. The group was created for students to have a place to “chill” and be comfortable. The project was starting following the success of other “gay-straight” alliances in cities like Sudbury and Toronto.

“I’ve never really had problems with bullying myself,” Reggie said, adding that one of the reasons she wanted to be open about being a lesbian and join the Rainbow Rights Alliance was to support other teenagers who were questioning their sexuality or “coming out.”

“Since I’m stronger than some students, I feel I can help them all, or some of them, or even at least one student,” Reggie said.

Reggie openly came out about her sexuality in Grade 9. “I used to get comments about me,” she recalled. “I’d get angry and I’d walk away. Then people started asking me about it.”

For Reggie, telling her parents was probably the most difficult part.

“My dad said he knew the way I was and he was fine,” she said. As she spoke about her mother, Reggie appeared a bit uncomfortable. “My mom, though, she was upset for a very long time.”

According to Leslie Marshall, a counsellor at MSS, a lot of the time the parent isn’t upset about a child being gay, lesbian, bi or transgender, but is instead in shock about the sudden change in the future.

“A lot of times parents are upset because they don’t want their children to suffer the challenges that go along with being different,” she said. She added that parents often have ideas and hopes for their children’s future and that a sudden change such as a child coming out, can be a big shock.

Lesleigh Dye, superintendent with the Rainbow District School Board (RDSB), of which MSS is a part, spoke to The Expositor about the school board’s policy on LGBT issues. “All our schools have a policy on equality,” she explained. “We’ve brought in guest speakers to talk to our students and provide training to our teachers on a wide variety of equality topics, such as ethnicity or sexuality.”

Suicide among the gay teen population has been thrust to the forefront by the ‘It Gets Better’ movement, which started in the United States in September 2010. It started with a video by an openly gay author and his partner that encouraged gay teens to “hold on” because life gets better out of high school.

It’s a sentiment that the CBC’s Rick Mercer, of the Rick Mercer Report, shares. “The It Gets Better message is a great message,” Mr. Mercer told The Expositor, when contacted by phone. “It’s hard for teenagers to imagine the end of high school. For an adult a three-month summer break is over in a snap. For a kid, it’s a lifetime.”

He said that while adults are protected from discrimination by law and can choose to move or leave a job, students don’t have the same options.

“As adults we have the freedom of mobility,” Mr. Mercer explained. “A kid in school has no choice. He has to go to school.”

Mr. Mercer said he “always knew” he was gay, though he didn’t come out about his sexuality until after high school.

“It wasn’t an option,” he said, though he later said he would have probably been “OK” if he had come out, as he was popular and student council president.

According to Mr. Mercer, the teens doing the bullying need to “stop acting like you’re in prison” and stop hurting other people.

“Realize the consequences of your actions,” he challenged them. “(What you’re doing) is causing irreparable harm to someone. It’s not acceptable.”

He also challenged the students who aren’t being bullied and aren’t doing the bullying to step up.

“The kids not doing the bullying, they have an obligation to protect their peers,” he said. “It can’t fall to the guy who’s getting picked on. Role models like student council presidents have to lead. Teachers need to lead.”

Mr. Mercer said society is full of gay and lesbian adults who have fulfilling lives and who contribute to society, adding that those adults need to step forward to support the teenagers who are coming out in high school. He challenged them to do so in one of his recent rants, which are broadcast across Canada as part of his television program.

“It’s no longer good enough for us to tell kids who are different that it’s going to get better,” Mr. Mercer said in his rant. “We have to make it better now, that’s every single one of us. Every teacher, every student, every adult has to step up to the plate. And that’s gay adults too. Because I know gay cops, soldiers, athletes, cabinet ministers, a lot of us do, but the problem is adults, we don’t need role models. Kids do.”

Steve said he has role models in his life that support him.

“My birth mother knows I am gay, and she told me I’m ‘exactly as I wanted you to be.’” Two of his mother’s friends, who live in Vancouver, are married women. “When I was out there visiting, I felt very accepted,” Steve recalled. “It was so great.

Agencies like Kids Help Phone (kidshelpphone.ca) are available 24-hours a day seven days a week, by phone or online, to help youth who need to talk to someone. Need to reach out? Phone 1-800-668-6868.