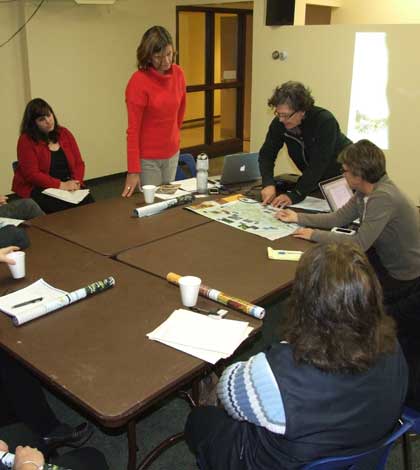 Cycling enthusiasts from across Manitoulin, the Bruce Peninsula and the North Shore gathered with the consultants to pore over maps and identify the best routes for cyclists seeking to circumnavigate Georgian Bay as part of a feasibility study for the Georgian Bay Cycling Route.

“We talked about the Georgian Bay Cycling Route, an idea that was really started here with an original concept put forward by Maja Meilonen and the Manitoulin Island Cycling Advocates,” said Ms. Mursell. “This was a technical meeting with the different regional representatives who are giving their local perspective of where the route passes through their townships.”

The feasibility study is currently in phase one, explained Ms. Mursell. “We are looking at specific areas to find the safest route possible,” she said. There are many areas that need a close look and the local knowledge on the ground is invaluable. “One (area of safety concern) is on Highway 17 being just beyond the Jacklin Bridge, at the Spanish River crossing. The road there is very restricted.”

Nairn Centre Mayor Laurier Falldien provided input into the meeting about cycling through his region, which is also an area of concern for safe cycling.

“Cyclists don’t want to be on busy trails if they can avoid them, but there are different concerns for different cyclists,” Ms. Mursell explained. Seasoned cyclists travelling long distances, usually 800 to 900 kilometres, are not likely to want to travel on local gravel roads, whereas shorter run recreational cyclists are less likely to mind such routing, she noted.

The key infrastructure gap facing the creation of the route lies between Estaire and Parry Sound, as the four-laning of Highway 69 continues quickly. “There just are not a lot of alternatives in that area,” she noted. But the goal is definitely to have a circle route that encompasses Georgian Bay. “That would really be nice,” she said. “We are working now to see if that is possible—checking out the different options.”

The first phase of the feasibility study is expected to be completed by the end of March.

The first phase is the technical feasibility, explained Ms. Mursell. Phase two is is the cost benefit analysis and resources, and phase three is the implementation plan.

Ms. Mursell noted that LAMBAC has been instrumental in moving the cycling route plan forward. “They have been strongly committed to the route,” she said. “They applied to FedNor for the funding, the Heart and Stroke Foundation and the Ontario Ministry of Tourism.”

The Manitoulin area is already well served by the Welcome Cyclists website with maps and cycling friendly businesses listed on the site at welcomecyclists.ca/manitoulinlacloche.