SHEGUIANDAH—It’s a beautiful day at the Government Dock in Sheguiandah as Sheguiandah Archaeology Site guide Olivia Fetterly gathers her charges for the ascent up the boardwalk to the famed Indigenous quartzite quarry and Canada Parks-designated National Historic Site worked by the first inhabitants of this land more than 9,500 years ago.

The 10-hectare site was worked by the Anishinabek, as well as the Woodland, Archaic and Paleoindian cultures, who used the glassy Bar River quartzite (a razor-sharp unique stone) harvested from the site to create tools and weapons. For more than a decade and a half, the Northeast Town has worked toward the creation of the site, seeking funding from upper tier governments to help make it a reality. Young Canada Works provided funding for the Archaeological Site Assistant this year, Rural Economic Development funded a promotional video and on-line booking software last year with a grant of $9,325 and in 2017 Canadian Heritage funded trail development to the tune of $33,100.

It is anticipated the site will become a signature educational tourism draw to Manitoulin Island.

“It is nice to see the signage, stairs and walkways in place,” said Northeast Town Mayor Al MacNevin, who noted several municipal councillors shared his delight in the ease of access for the site when they had a tour before the official opening. “We had been on some previous tours where you had to weave your way up the hill through the bush. It was quite challenging back then.”

Among the flora lining the walkway lies a natural security system against any pilferage of artifacts (a federal crime), plentiful amounts of poison ivy. “It does help to keep people from straying off the path,” admitted Ms. Fetterly.

Along with numerous educational signs at key stops along the tour, metal silhouette cut-outs invoke the people, cultures and history of the site with graphic representations.

Ms. Fetterly explained that the site was also a habitation site, yielding pottery shards and domestic tools associated with habitation and has been used for many years as a spiritual centre by the Anishinabek, with sweat lodges, meditation and vision quests taking place. The site would have been surrounded by water for much of its existence as the ice-age glaciers retreated and was located along the course of a major trade route.

The Northeast Town is currently working on establishing a partnership with nearby Sheguiandah First Nation to better tell the Indigenous story through an Indigenous lens.

The site was rediscovered by Dr. Thomas Lee of the National Museum of Canada in 1954 while he was visiting Manitoulin in 1954. The site was re-investigated in 1991 by a team led by Dr. Patrick Julig (of Sheguiandah) and Dr. Peter Storck of the Royal Ontario Museum. The site has been a source of controversy due to Dr. Lee’s assessment that the site was roughly 20,000 years old. While that cannot be completely ruled out, the later study concluded that Dr. Lee had based his assessment on sediments that most likely were taken to lower levels through the action of the roots of fallen trees and the churning of waves upon an ancient beach.

Tiny teeth of a prehistoric creature, similar to a lamprey eel, also played a role in helping to determine the age of the site—had artifacts been pre-glacial, those tiny teeth would have been crushed by the weight of the subsequent ice.

The tour follows a fairly (although not completely) accessible boardwalk constructed by the Northeast Town across a series of “steps,” plateaus created by a succession of beaches down through millennia. Each of those steps rising up the hill are associated with an earlier culture, but each culture utilized the unique stone to create tools and weapons that were traded as far away as the east coast, south beyond Florida and to the west across major pre-contact trade routes.

Ms. Fetterly describes the flora and fauna of the region, noting some of the medicinal plants and the fact that Indigenous peoples had a use for nearly every plant.

The view from the top of the site is outstanding, overlooking the countryside including a portion of Highway 6 and the forests and fields of Sheguiandah and well-worth the tour. It also provides a wealth of information about this region’s history, plants, paleontology, anthropology and geology. 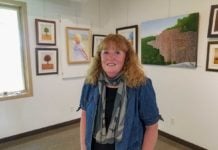 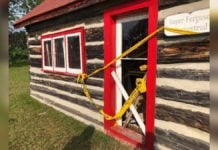 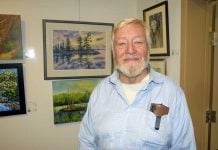 Kudos to the Sheguiandah museum for art display