GORE BAY – The Lyon’s Memorial United Church in Gore Bay will be hosting the memorial of children’s shoes that was begun by the KAIROS Manitoulin group at the United Church in Little Current earlier this month, in memory of the 215 Indigenous children whose unmarked graves were found on the grounds of the Kamloops, British Columbia Residential School in May, and most recently 751 unmarked graves at a former school site east of Regina, Saskatchewan.

“I was inspired to do this by (Aundeck Omni Kaning First Nation) Chief (Patsy) Corbiere’s suggestion that people use Canada Day to educate themselves about residential schools and their legacy. So we will also be offering educational resources,” explained Reverend Mercedes Hughes. She noted, “In light of today’s (June 24) announcement from Saskatchewan, this becomes only that much more timely and important.”

The Chief of the Cowessess First Nation, Cadmus Delorme, announced that 751 unmarked graves have been discovered at the site of the former Marieval Indian Residential School in Saskatchewan.  He outlined that this was not a mass grave site but rather a cemetery overseen by the Roman Catholic Church.

“The Marieval Residential School gravesite was overseen by the Roman Catholic Church from 1886 to the 1970s. During this time children who attended Marieval and passed were buried at this gravesite.  In the 1960s the Catholic Church removed the headstones and today, we have over 600 unmarked graves. This is not a mass gravesite; it is unmarked graves,” Chief Delorme said in a statement. “Our end goal is to locate, identify and put a markdown honouring our loved ones.”

Chief Delmore called the removal of the headstones a criminal offence, noting the graves may have been marked at one point, but the Catholic Church may have removed them at some point in the 1960s. He also pointed out no one is sure if the graves are all for children, as stories in the community suggest there may also be adults buried there.

In  a statement Prime Minister Justin Trudeau said he was deeply saddened by the discovery. “The findings in Marieval and Kamloops are part of a larger tragedy. They are a shameful reminder of the systemic racism, discrimination and injustice that Indigenous peoples have faced-and continue to face- in this country. And together, we must acknowledge this truth, learn from our past and walk the shared path of reconciliation, so we can build a better future.”

Ontario Regional Chief Glen Hare, in response to the latest discovery of unmarked graves in Saskatchewan said, “the recent discovery at Cowessess First Nation is another painful reminder of the historic injustices and abhorrent actions against Indigenous people across Canada. On behalf of the Chiefs of Ontario, we are deeply saddened by this news. We are sending our prayers and condolences to the families of the 751 children and adults lost, and survivors of the former Marieval Indian Residential School.”

“This is a country that is built on institutionalized racism and genocide of Indigenous peoples,” said Chief Hare. “The tragic legacy and devastating effects of these residential schools are deeply rooted within our communities, just as systemic racism and prejudice against Indigenous people are rooted in Canadian society as a result.”

“I echo the strong words of Chief Cadmus Delorme, ‘we must put down our ignorance and accidental racism of not addressing the truth of the relationship this country has with Indigenous people. We are not asking for pity, we are asking for understanding’,” said Chief Hare.

“On behalf of the Chiefs in Ontario, we call for an immediate transformative action plan that reflects the Truth and Reconciliation Commission’s Calls to Action. We must have justice for the countless lives lost across this country. The stories of these children will be told and Canada must be prepared to atone for their role in these atrocities.”

“I am calling on Prime Minister Justin Trudeau, the federal government and the provincial governments to declare a national day of mourning on July 1, in honour of the children whose remains were found on former residential school sites in Saskatchewan, British Columbia and across the country. I ask all Canadians to stand shoulder to shoulder with us on July 1 as a day of reflection as we work to collectively heal ourselves, families and Nations.” 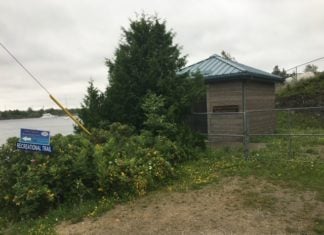 Press Release - July 24, 2021
LITTLE CURRENT - The Town of Northeastern Manitoulin and the Islands has declared a state of emergency as it scrambles to find the source...