Their production of ‘This is How We Got Here’ by Keith Barker was one of the most powerful and compelling Gore Bay Theatre productions the Recorder has witnessed, so it was not surprising that the group did so well.

QUONTA adjudicator Bea Quarrie lauded all aspects of the production calling the set and lighting “magnificent and magical, exhibiting the Northern Ontario landscape,” and the original music “beautiful and mesmerizing.”

She said the actors “worked as a true ensemble with such believability that the audience was transfixed on the powerful story. It was an incredible and memorable theatre experience with striking images and gut-wrenching performances.”

Gore Bay Theatre has won the Outstanding Production Award five times but this production received a record-breaking 13 nominations and six awards. Bill Viertelhausen was nominated for a special adjudicator’s award, the “every group has a hero award” for his unsung contribution to working behind the scenes.

Andrea Emmerton and Walter Maskel were nominated for special adjudicator’s awards for “risk taking in tackling such a difficult and powerful play,” and for “making it happen.”

Co-directors Andrea Emmerton and Walter Maskel were thrilled at the results. Mr. Maskel said, “we were extremely pleased with the reception the play received in the Sault, a standing ovation and very positive words by the adjudicator and the awards we received. The ensemble acting award was particularly satisfying because it honoured all our actors who worked as a cohesive team performing at the highest level.”

Ms. Emmerton added, “we have now been invited to represent Northern Ontario at the Theatre Ontario Festival in May—which features the top productions from the various regions in Ontario. The Festival will be held just north of Toronto at the Richmond Hill Centre for the Performing Arts, a state of the art theatre. The stage is 40 feet wide by 40 feet deep, compared to our Gore Bay stage which is 15 feet by 15 feet, so it will be a challenge to adapt to the larger space.”

“We will be busy over the next two months preparing and fundraising for the trip,” said Ms. Emmerton. “The hard work will be worth it because we are honoured to be representing our community, the Island and Northern Ontario.”

The production will be making an encore performance in May to prepare for its trip to Theatre Ontario.

The theatre group from North Bay won three awards at QUONTA, with Elliot Lake and Sault Ste. Marie theatre companies both bringing home two awards each from the competition.

“The adjudicator said the set was magical and that you could hear a pin drop because the audience was overwhelmed by the power of our production,” said Mr. Maskel.

Mr. Maskel has won Theatre Ontario with three other groups. “If we (Gore Bay Theatre) were to win we would be smallest theatre company to ever win.” He pointed out there will be groups from Toronto, Sarnia and probably Ottawa at the provincials, but he said the local Gore Bay group has a solid chance of winning. 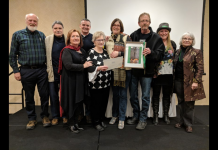